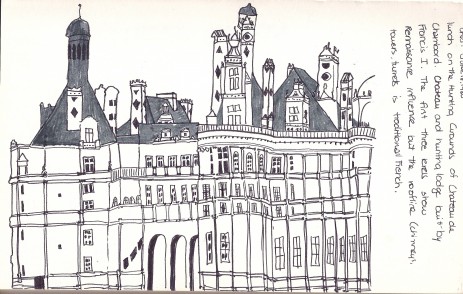 My sketchbook notes were minimal, so these are my thoughts with a little help from Louise Gardner’s 7th edition. Here’s some background on the owner and creatives…

After a divided 15th c., France was under leadership of strong kings. She became aggressive with her Italian neighbors, taking the artists Leonardo and del Sarto into court first.  The Renaissance artists  didn’t make a mark in France.  But, later Florentine Mannerists implanted Italianate style which finally overtook the French Gothic. The religious art of the Middle Ages was superseded by glorification of the King. Here’s the guy… 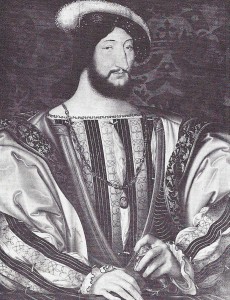 rumor has it "The merry monarch was a great lover and hero of hundreds of gallant situations." Louise Gardner.

Jean Clouet, Francis I. Tempera and oil on panel. Louvre.

Italian Mannerists Rosso and Primaticcio assembled  the art crew (School of Fontainbleau) for Francis I palace combining painting, fresco, imitation mosaic, and relief stucco sculpture.  Look it up if you need a day trip from Paris, (Venus Reproving Love, Gallery, some frontal) but I liked this house better.

So, a guy’s gotta have his lodge, built near a forest to commune (hunt) with the animals. Being a meateater, I have no problem with this. Someone has to do the dirty work.

“It has been said of Francis I that his one obsession besides women was building.” Louise Gardner

So back to Chambord. 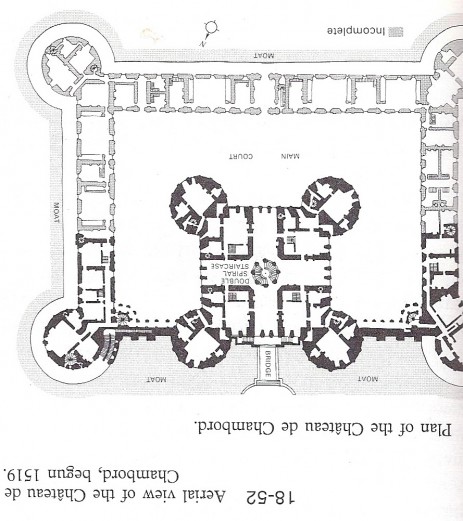 Plan by a pupil of Giuliano da Sangallo.

I’ve oriented the plan like my sketch. Do you think the head architect Giuliano was getting a little grey behind the ears?  or it he’d just gotten fed up and said “you deal with him”?  Well, it’s a service industry and the well-paying customer is generally lead to be thought that he’s right.  And he is, in my opinion, pretty-much  right-on in this  collaboration. The ordered Italianate Renaissance banding on the bottom and earthy French Gothic Turrets, dormers, chimneys and lanterns on top  are quite the sexy couple.

I remember standing within the very center of the square block. The broad central staircase to the upstairs was marble and amazing. It kind of reminded me of the stairs at the Nelson from the lower level by Atkins auditorium to the bookstore. I’m having  a flashback because Gina and I used to race the twin staircases while Ginny worked the education wing.  That is, until one of those guards more frightening than the Duane Hansen caught us.

Anyway, we couldn’t go upstairs at that time, so I went out to sketch.  I sketched by “le snack bar”, albeit tasteful and serving wine, then just west of the chateau. We did get to go up to the roof.  It reminded  me of something but I haven’t quite put my head around it.   Edward Scissorhands castle or some celluloid collage I have in my head.