I remember both my mother and my grandmother talking about footbinding in Chinese cultures as a child. I am not sure where I read it when I was in high school, or maybe it was just told to me. But the vivid visual picture in my mind of having one’s foot bound back upon itself in order to keep it small, a bud, is more vivid than any picture. I had never seen a picture of this until now when I just googled it, but cannot share. I think it is better just told in words by mothers, grandmothers, and authors.

The purpose was to not only arrest a young girl’s foot at a certain stage of growth, it was to actually bind the toes back underneath the ball to achieve a small bud-like appearance, a lotus-shape. This was considered desirable to men. The pain can only be imagined.

It is a mother-daughter story. And I think stories such as Lisa See’s Snow Flower and the Secret Fan are important to read, to see what it is like for women in different times-different places. And to see how our language with each other, our nu shu, allows them to endure and enjoy.

But it as actually the Japanese Government which banned foot-binding in Taiwan in 1915.

So this is a story about the Geishas in Japanese culture. A much different story for women. This was a story I shared with my daughter when we read the same book. 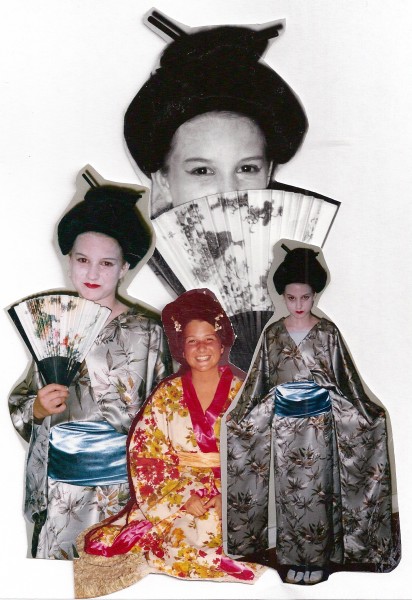 The closest English translation of the proper noun “geisha” would be artist/performing artist.

They are artisans that train for long periods of time (taking many years of work before becoming a full-fledged geisha),

therefore they, in some sense, symbolize perseverance.

The world of the traditional geisha is the flower and willow world.

The flower is the symbol of beauty, but the willow is this idea of flexibility, not being rigid,

and this is how you survive.

but some modern geisha see themselves as liberated feminists.

“We find our own way, without doing family responsibilities. Isn’t that what feminists are?”

These women leave their families at a young age to immerse themselves in their art.

My daugher, Lacy, read Memoirs of a Geisha by Arthur Golden the summer after fourth grade. We are both Pisces, Lace being born on the Ides of March, four days after my birthday on 11th. Always seeing both points of view, we were both immersed in books during grade school. She is her own person.

She wanted to be a Geisha for Halloween, but I don’t sew.  So we trooped to Wichita to Hancock and we kind of drew out this pattern, making up the kimono as we imagined it to be. Velvet flip-flops with a tatami mat footpad were her geta.

My geisha girl experience was as a sophomore server to S.M. East Prom in 1977.  Here is a picture of all of us: 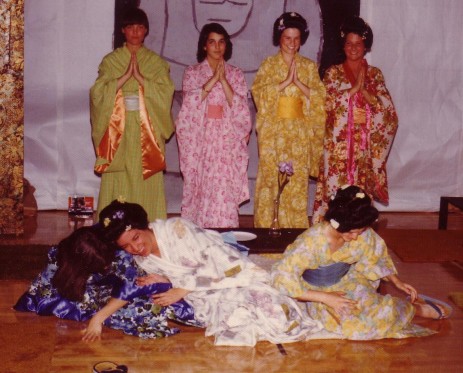 Being a Geisha is, in many ways, good training for being a woman. We have a secret sisterhood. We enjoy putting on makeup and clothes, seemingly to be attractive to men. But mostly because we enjoy the costume and makeup that we are privileged to wear in our roles. We congregated in groups with other Geisha at slumber parties in our youth, practicing our dance. And we learn from our older sister, the okee-san, and our mother, the makee-san, not just from our own blood.

The Geisha is skilled in music and dance. She is educated with knowledge to participate in skilled conversations of culture and cleverness on equal plane with the businessmen she entertains. And with her own perspective.

And, like the Geisha, we are the beautiful flowers

who bend like the willow, to prevail when the winds blows.

2 comments on “Memoirs of Geisha Girls.”