I think it is universal that mothers with two girls dress their daughters alike when they are younger. It is just too fun to not do this. There is one Easter where all Graves girls, GG included, had beautiful matching Liberty-of-London looking print dresses, Gina and Paula with white hats and collars.

This works pretty well until the younger sister gets wise to the fact that she will have to wear this same outfit again in a few years and then it doesn’t seem so fun. I can’t imagine what it was like for people like Marthe Dreher who had four sisters in her family. Poor thing, she probably had to be pictured in the same dress for like a decade.

A whine about hand-me-downs.

There is a picture of me wearing a red kind of one-piece stretchy number that I DISTINCTLY  remember was a hand-me-down because there was a patch of several stars at the knee which covered a hole that I DID NOT MAKE. Double-insult!  I think I probably only really had to wear a “matching outfit deux fois” seulement un fois. But that has always been enough for me to complain loudly. So, I’ve gotten that out of my system, let’s begin the fashion show.

Oh, one more thing about doing this in the Adams Family.

I didn’t ever dress Jack and Lacy alike. They tend to look kind of alike when they are working with boots, jeans, and their rain-wind gear always happens to be blue. I’ve never was organized to exert much control over the whole visual picture thing as witnessed in my engagement picture in the Independent. I am wearing a black, yellow, red abstract print and John Adams is wearing plaid madras. All I can say is Thank Goodness it wasn’t in color.

Lacy Adams had a brother and two boy cousins, so in her case, the dressing alike at Christmas was really only one Christmas. It was a three-sweater-some ensemble which my mother put together for a Christmas of the Graves, Lloyd, Adams in KC. I can’t put my hands on the picture right now, but I think they all said “Cowboy.” It’s okay, GG bought me one of the coolest sweaters I ever had (it was pictured on Torey Time with me and GG) at the boys department, at Jones I think. 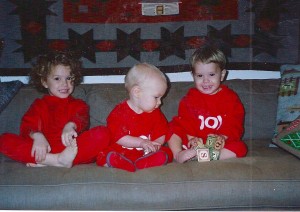 Oh, wait, I just saw one picture of the three Graves grandchildren in red longjohns at Christmas so I will put that in. The boys got a “boy” label, but I suppose Lace didn’t because no one has ever mistaken her yet for a boy, though she does look quite a bit like her father.

And on the runway… 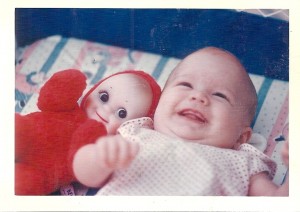 Scaary! It's a better effect when both baby and doll eyes are wide-open.

I have to put in a few of these of just me from the first Christmas when I was alive, mainly because they are probably universal family traditions. Well, maybe not this first one, but if it is with your mother’s sense-of-humor please post.  Which is, 1) to put the live baby by the plastic baby (preferably a vintage doll or least requisite to have those blinking eyes) and photograph them together.Often, it is difficult to differentiate one from the other. It has never really been discussed. But my mom kept the scrapbooks and thankfully continued to feed with the best pictures and has continued to add these of grandchildren and cousins. Don’t you think it’s jarring?  Probably PTSD from a nightmare about some doll baby that talked on Dark Shadows or an old pre-chucky flick.

2) The baby opening the package at First Christmas Picture. 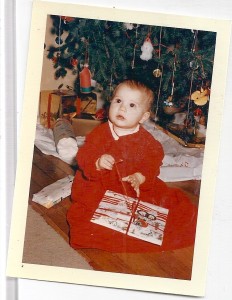 Everyone has one of these in their scrapbook.

3) The Mother Holding smiling baby in front of tree picture. 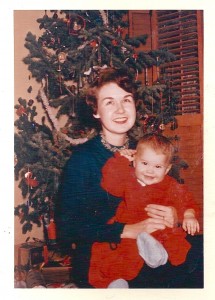 I think I will just carry on with the tradition theme.

4) Being pictured with a Great-Grandmother and two girls in architectural Chair. The first part is pretty darned important and we all know why because we’re getting closer every day. The second part is because these funky chairs seem to follow around the child who most needs the extra furniture which was moi. This one has a name, but my dad or mom will have to post that. It’s like a big round ring and kind of woven, sits low to the ground, Danish Modern. I think it is still over at the bunkhouse at the East Ranch, I might want this back. I want to say Bertoia but that is a batwing chair that is in the master bedroom at the XIT Headquarters. 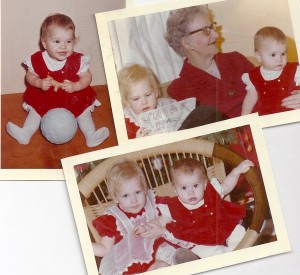 5) Pictures of evidence of someone baking and hints of future food issues. Later these become more evident as worn directly around the waistline. I am sure many people have these in their albums, and all I can say is that there is a bonus to identifying the problem early on. 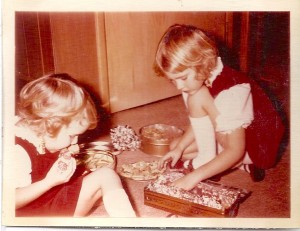 6) Picture documenting how girls go from baby dolls to hard stiff little dolls with great clothes and accessories. Personally if it were my choice, there would be a soft cuddly baby girl dolly with really great clothes. At least that would be my doll role model. 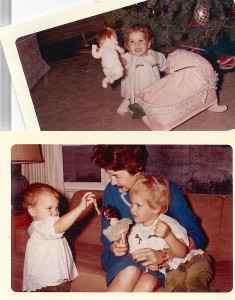 Dollies gets dollies in sage green velvet with lace top and bows. 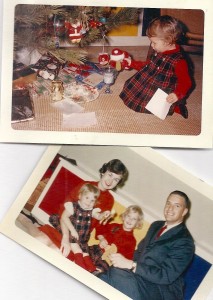 7) Everyone has to have a Highland Christmas Fling. This was before I went to Highlands School, though. The Adams Family is actually Scotch-Irish but I’ve never really seen any of those Adams Cowboys or Sisters wear any kilts or even a plaid cummerbund. Anne Cornwell Gall had some Scottish Plaid boxers and a wool plaid fringed scarf which she would don in the Theta House lounge with just her bra when appearing as, “Tartan Girl.” Wish I had a picture. 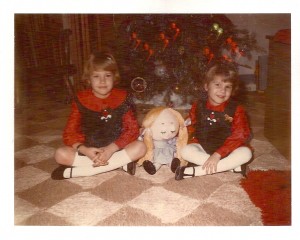 8) In our Florence Eisemans. We had several, but I felt like this particular time period was really smash with the simplified appliqués and jumpers that tied on the sides. Very contemporary as it was 60s for what is usually a very traditional clothing line. I think store on Plaza was somewhere over by hmmm…changes so often…a chain rib place, Buca di Beppo, Steve’s,  one of those stores like Abercrombie that used to be really nice and kind of mass-marketed….Anyway, what was there in my day was a Bennet Schneider, a place to buy and get fitted for shoes where you stood on a platform and had feet squeezed, and Cricket West. Or so we can all get located with something that will always be there, across from that triangular block with the shoe repair.

9) The year we all had pantsuits Christmas.  These were beautiful and not too long after that my mother had a purple velvet pantsuits. She wore it to dinner at Putsch’s 210 and I think maybe she had to go home and change into a dress. Hadn’t come to KC yet, I guess. 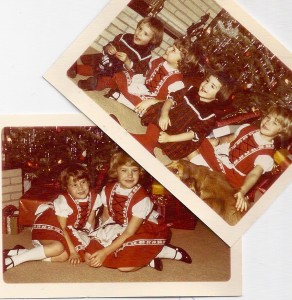 A nod to the Germans.

10) More ethnic Christmases…a nod to our German brethren and a slight strain I have to admit in my own. Sometimes comes out in rigidity and a leaning tendency towards Paternalistic Systems. 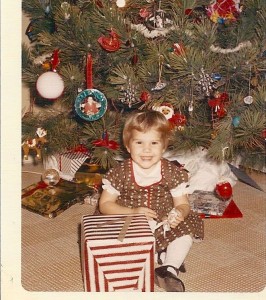 I had to put in this other one I found when I was younger. It actually looks pretty authentic, so I am wondering if my parents or Grandparents had taken a trip. I think maybe Gina had one, too, but that pic’s in her scrapbook. Her’s was blue. 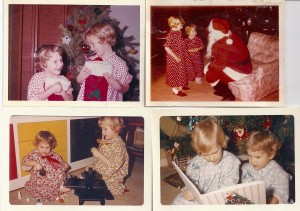 11) Grandmother Handmade Gowns that were better than Lanz! My tiny talented Grandamartha Graves made us these beautiful handmade nightgowns, every year and more. She was amazing with colors and prints. They were softer than soft and big and cozy and never had scratchy places in the inside like Lanz gowns can have with the lace. I think they all had a ribbon at the neck.

Grandamartha also had the best embroidered hankie collection I’ve ever seen, was a master at découpage which I learned and used on a handpainted cowgirl dresser in Lace’s bedroom, and had these great little soaps all over that had some kind of little applique that she would put on them. I loved staying with Grandamartha as we always made stuff and I got to watch soap operas on TV while she ironed downstairs in the basement. 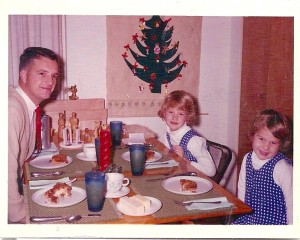 a picture counting down to Christmas on Christmas Day!

12) The Advent Calendar and Old Maid Coffeecake. Traditions. My mom made these Advent Calendars. They were appliqued and hers were very contemporary as they were a stylized tree (felt?) on a burlap background. Each little pocket below had a tiny ornament in it and she also found the neatest most special little things with meaning. From the first of December to Christmas Day, we would do this in the morning before school. We always ate ate breakfast together in the kitchen.  Gina and I would take turns taking out the little surprise in each pocket to tie on the tree. It definitely taught me a love for tiny things and also the rewards of anticipation and delayed gratification!

The Old Maid Coffeecake is another tradition from my Grandmother and maybe her mother…?  It is basically flour, salt, butter, eggs, sugar, pecans, brown sugar, maybe some baking soda. Lots of good stuff in proportion to the batter so every bite is delish.

Well, that is it for the Fashion Show which turned into Graves Family  Christmas Traditions. Thank you mom, Ginny Graves, for all of the photographs taken and so well organized in our Webway albums. You are amazing!