Lacy’s Rudogh and Jack’s Minimalistic Sleigh with Multi-legged Guide who will go down in His-Story.

Lacy read read read "fresh books" so she has these great phonetics!

Just love it! Like Santa because he has a triangle hat, a triangle moustache and a triangle beard. And Mrs. Claus has a Triangle body. Also can you see it is obvious this child has curly hair herself because of how she handles curlicues for both curlybeard and furry boottops.

re: cookie baking and the Mrs.’s often making the holidays as much work as possible

EXTRA ANIMAL LEGS, GOOD TO HAVE SOME SPARES

And both of the kids (see Jack’s below) have at least one extra leg. I agree, when you look Rudolf and all the reindeer it gives the impression that there are a million sets of legs there carrying all those toys.

PUPPET??? (Lace will have to explain this).

I have no idea why the puppet is there except that there was an old puppet theatre in the basement that the kids would play with at mom’s. He has has a triangle hat. Actually, in looking at the strings and bar above, it might have been one of our old marionettes from those shows we did at the Nelson Gallery where we made our own puppets. 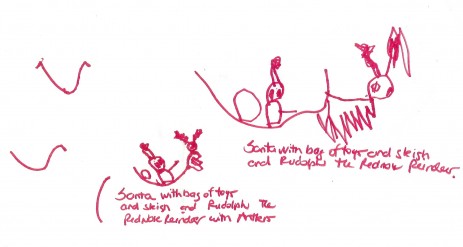 I am trying to get back to this level of simplification that I fear I never had in making everything so complicated. I do not know what the simple lines are at the left, but maybe he was perfecting the sleigh because they do usually have that roll in the front.

In the middle picture:

Santa has Rudolf sitting on the front of the sled which I think is great. Rudolf needs a break and frankly, if Santa’s sleigh isn’t self-powered then who’s really is? Love the circle, edited bag of toys.

On the top right picture:

Santa (in both) has some nice rosy cheeks and his bag is bigger as is sleigh.  Because the kids grew up on a ranch with deer munching our trees we tried to plant in the yard as well as eating all of our alfalfa, Jack has seen lots of antlers. Plus, when deer hunters get a deer, they often leave the antlers so they are often in a pile all jumbled up and interlocked (like those gateways to Square in Jackon). So I like the way he deals with their intricacy and just makes a big locked up mesh. He looks like a pretty big Buck!

And again, Rudolf has at least 3 spare legs which can always come in handy when you are traveling the miles that he covers.

Okay, that’s it! I love them. Again, they would not be here if it were not for my mother Ginny Graves saying, “draw me a picture!”  and “Tell me about your picture.” Good job Grandy GG.

Rudoph with your nose so bright, won’t you guide my sleigh Saturday night!?