Men in speedos: David, Michael, and the Prairie Village Pool

My web designer Shawn just told me that I need to introduce the story with a little background first so someone other than David and Mike might find it interesting which I hadn’t thought of. So, I was the Sr. Business Editor for the Hauberk in 1978, Shawnee Mission East’s Yearbook. 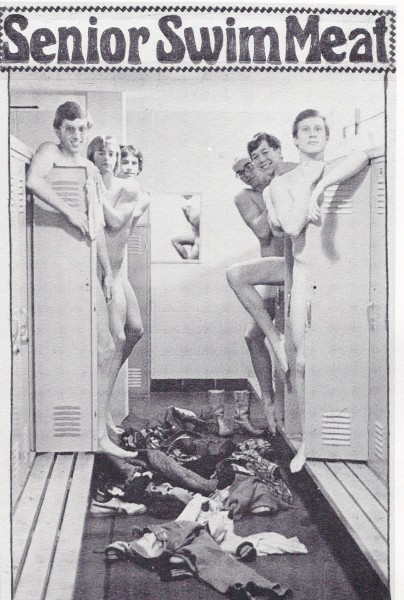 Well hung on the lockers

I mentioned this ad to my neighbor Britt 32 years later, actually two days ago.  With him having no visual reference,  he mentioned the stylization of Steve Hobson’s hand, so Michael, son of an artist, it all holds up, plus Dave’s Esther Williams ballet leg (see water ballet at Prairie Village Pool), nice right side external oblique, Dennis. 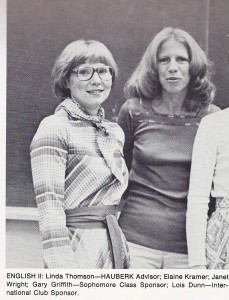 This is Linda Thomsan, our boss, my sophomore Honors English Teacher and bar none best at Regional American Literature selling it with her energy, sense of humor, stylish scarves and ensembles. Business staff meant we took in all the ads which brought in the bucks and laid them out but I think Doris Bywaters did all the work. There were three ads (Blub Club, KC Coloring Book, and Dirty Dozen) that were from the Graves workshop.

Anyway, since the point? of this website was to encourage everyone to live an artful life, every day, every place, I want to give the award for best ad to the Senior Swimmers, the guys who took SME to win State Champions in 1978.

I’ll have to dig out pictures from Prairie Village Pool (there is a facebook page for PV Pool lifeguards), but those of us who didn’t belong to a country club were raised here in the summers:  swim lessons, the babysitter post kiddie pool until our moms could get us onto swim, dive or water ballet teams. We all took Lifeguard Training and Red Cross at 15 thru PV Parks and Rec so we would be earning at check at 16.  I barely passed the Red Cross written test and drew blood scraping my victim’s back over the gutter in the drowning rescue test in the diving pool.  This group also included my neighbor Dennis (see Morgan-Graves Circle) and many more.

It was a 46 hour week, 6 days a week. There’s nothing like dull, monotonous, hot work with the public to bind people together and learn hierarchy. We all had to pay our dues before the coveted job of lifeguard, but that first year I was the “name, please come to the front desk, name” announcer and balanced the cash register while Mike and David took pins in the basket room. So, we were in close quarters together. They also hosed down everything, everywhere, all the time and a lot of it was really gross. On rainy days, we would all pit clor, a vile job. They were in trunks but I don’t know if they went cowboy or had speedos on underneath. Wish I had all those little numbered pins now for an art project.

I moved up to the kiddie pool so I could ruin my skin and stayed there for 3 more years, but I think Mike and Dave had to do more time because I still called them down from the basket room to remove the chronic flasher (see UMKC Conservatory).

The alpha males were the Rovers who sauntered around the 50 meter, 50 yard, the lounge with no loungers, and the diving pools while twirling their whistles. Check this out define.php?term=big+swinging+dick. It cites popular use as 1989, but this was 13 years prior, we’re always way ahead in the Midwest.  Correct me Dave and Mike, but it was head rovers Paul Vyhanek and Paul Heurman who took this stroll their last day in the buff.  The women with young children were so thrilled that no one said a word, they didn’t break their pace and made it around the entire complex and out the turnstyle, probably hanging out at the bleachers. 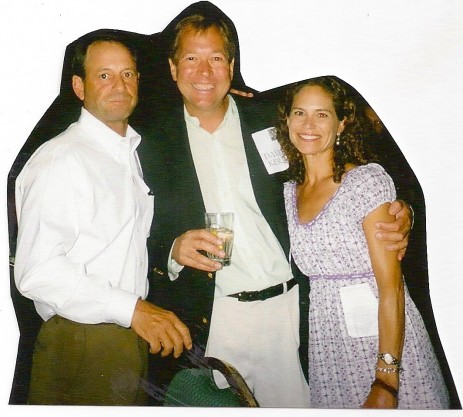 John Adams appears to wearing down a bit, not being his own reunion, though many thought he went to East due to great social visibility, especially for one from Wabaunsee County, both in KC and at KU.

Too much here, so Dave will have to be another post, though he did research his perfect beautiful wife on the job, but a word about Michael Jackson Pronko.  He always made me work it. 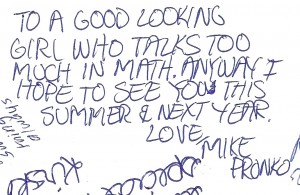 "Talks to much in Math"

We were the only holdouts who made it up to French V, maybe he was VI with Madame Speidel (see Maître Corbeau sur un arbre perché). When he’d give me a compliment, I’d shun it, he’d point this out, I’d quote “Le refus de la louange…” and he’d finish my Rochfaucauld.  Sometimes harsh, he asked me one time why I pretended to be spacey. I don’t think I was pretending but I did check myself on using the gray matter…this was when I was spending hours practicing precise movements to cheer on hero-warriers (see Marvin Hall: The Transformations of Society). I hope to see him while he’s on sabbatical.

My mother didn't think girls should have cars in high school because, "then you wouldn't know if he liked you for your car or your body." 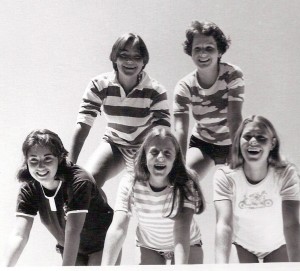 The Baby Blubs were the little sisters of the original Blub Club. I guess the date below, 76, is when the photo was taken though their trip which this photo documents would have been summer of 75. 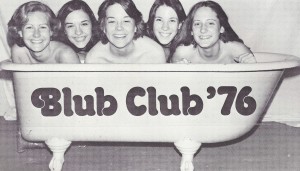 Ginny Graves organized the trip and logistics and the list of things to bring, mainly an air mattress and swimsuit.  Dean Graves drove the boat (see Dean Graves and water).  I can’t mention the incident illustrating my mother’s sense of humor because my father documented it on film, very upsetting to her, and it’s a forbade Graves topic. 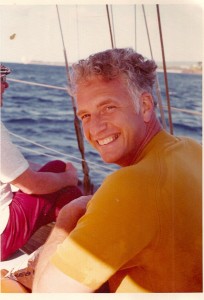 Dean the Marine, here as Captain

We would drive to Bagnell Dam, go on the water slides which I have movies of, then board the houseboat where would eat, eat, dance to loud music, swim, and wave to other guys on boats while my Dad drove us around, finding safe coves for the night. There was also a stop to Bridal Cave so we could see the stalagmites and stalactites and plan our weddings.

Well, that’s it for blubs, but for what this is really about, boobs, a word we didn’t use in the Graves family, we said breasts, another reason why I hung out along with the Dreher sisters and Dick Dreher.  He would know terms like “superfluous papilla” and when a daughter might find an extra mole, he’d suggest that this might be the issue. I think there was a character in a James Bond movie with one.  The Graves also only used the word bra and when I first heard brassiere, I thought it was a dirty word, so French. 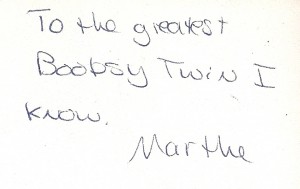 For some of us, it all kicked in early, but eventually we all had them. It was a combination of raging hormones and all that salty food we were eating. Fat molecules deposited with the nurturers, while the guys had only blood molecules to rush to extremities.

I read in seventeen magazine that men who liked really big breastsa were lacking in self-confidence.  I also read in Vogue that anything more than a champagne glass was too much. Little did they know 30 years later we’d have big slurps. So, getting so much attention from David B. throwing paper clips down my sundress in 8th grade did it for me though it took a while.

And, back to Blubs, I think we should organize another trip and get the Deaner to drive the boat. Maybe the guys can come too if they get their own boat. It is basically a big floating RV, so I’m not sure if we could all handle the plumbing situation now.