Boys will be boys, men and their toys: the Komat’su Transformer. 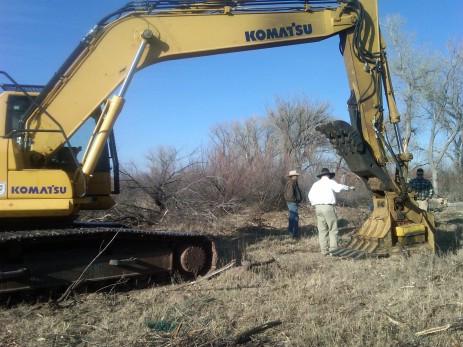 Men and their toys. Have videos but later.  Decided will just get a post in each day of exciting things in my life, not all has to be a footnoted thesis.

This was a demonstration of a piece of equipment that will clear Russian Olives from the riverbed.  They come from upstream, introduced at one time by farmers as windbreaks, and multiply rapidly. Very few when we moved to sw Kansas and have multiplied 30 fold so it’s something to pay attention to.  Tamaracs are good, native and serve a purpose but not so with Russian olives; hard to ride through, choke out grass, very rough, cattle can’t get through to river.

People always trying out things down here to see if they work. I remembered a particular kind of moth introduced to take care of salt cedars during my tenure, but no one seemed to claim it today when I spoke with soil conservationist Tom Flowers, so don’t quote me. We’re just the place to try it out, not the instigators but support others efforts. If proven and affordable technology, we’ll partake. 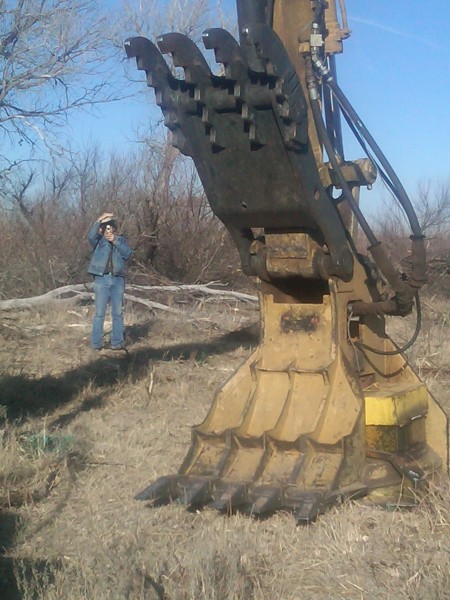 Get the scale? That’s Larry Sorters, cowboy and preacher who worked with various Adams off and on much of his adult life, starting with $350 a week living in a one-room bunkhouse by my garage long before I was here.  Look for great video later that  I took today of Larry telling about this as well as his grandfather driving mail by stagecoach from Beaver to Meade, about 36 miles.  The banks would throw in the money bags to go along (Larry’s very trustworthy stock) and a few passengers as extra clients. Now I get why they were robbed in the movies, though I only remember one western growing up. It was “How the West was Won” at a drive-in and I don’t think my father ever got away with it again. He was self-employed, not like a postal worker. That’s another day. (see Larry Sorter)

So back to how it works. It tweezes tree out by root, chops it up and jettisons out left side. Dangerous, like when a piece of wood escapes the bandsaw in architecture school. The woodshop turned out to be a liability and I think it’s different now, but tho frightening, it was a great learning experience for me professionally, the girl who dreamed of one day having an easybake oven. Thanks to Dan Rockhill, School of Architecture at KU.

Roots can’t be completely pulled out without breaking and any root sprouts, so this technology proposes a minimal amt. of chemical (I know, always sounds bad) to root. It’s like having a lawn (buffalo grass) but having it overtaken with really big trees and root systems.  Soil conservationist, Tom Flowers said that efforts to just pull out had been ineffective and costly;  Russian olives returned rapidly.

This is Roland Spencer’s toy www.ranchlanddevelopment.com. In a bit of down time when John was diverted, I was able to introduce myself to Roland and ask a few questions. Within two minutes, we spoke the same language for he was a contractor with loving hands for a historic stone building that is now a bed and breakfast in north central Kansas, I’ll get more information on that. He is a man of many talents for his company specializes in Ranch Restoration, Real Estate, and Rangeland Management, but I think this coalition was a labor of love as most preservation projects are. That was it, got the “cut” sign from John, but he is pleasant and I do still want to hear more about how the Japanese happened to corner the market on these unless of course it’s a marketing ploy of John Deere. Maybe he’ll post…

We had neighbors on each side come, but it’s only relevent along river and there just aren’t many of us.  Would have to be several people that went together to make it profitable for him to come out, we’ll see.  I’m pretty much overwhelmed with enormity of task with most things like this on the ranch, but you’ve got to stay on it and accept that nothing stays the same.

Anyway, a day in the life.

Update, Kirk Worthington saw this post and had to show off Kevin’s toy, but now I cannot find the picture, so Kirk re-send please. We want details, too.