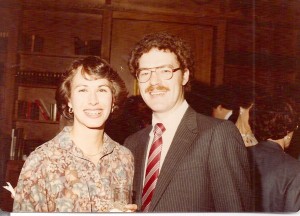 Mary Stauffeur Brownback and her husband at Paula Graves Adams and her husband's wedding reception....I don't know....doesn't look like a social conservative to me...

I thought I’d begin the story here. Mary Stauffer, Carol Zachery, Karen Majors, Kitty Wilson, Linda Warwick, Joy Plavidol, Leslie Yearick, Lisa Dickhaut and my older sister, Gina Graves, were the rat pack of Highlands Elementary School and all that entailed from girl scouts to teepeeing houses to ice skating on brush creek. Mary moved to Topeka after grade school but we re-connected when she was a Pi Phi at KU.  She hung out in my bedroom at the Theta house with my pledge mom, Karen Majors, also my sister’s best friend and the main reason why I chose to plant myself at that pad. Mary then attended law school at KU with Diane Worthington Simpson where she met another classmate who she married, Sam Brownback. ‘Tis such a small world in Kansas. 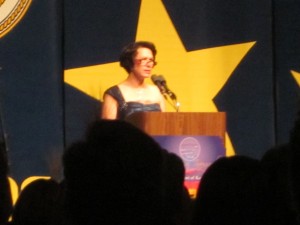 A very nice speech. Alongside a great woman is a great governor.

I won’t go into the parents’ connections or Adams’ connections but as in the big scheme of life, we’re connected, and particular to this night, we’re Kansans.

Lots of people were all in Topeka at the Ball. My evening and experience of living in Kansas told me who was at the party. All religious denominations, political parties, fiscal philosophies, races, genders and gender preferences, states, ages, the business-creatives, all Kansas family, together for the gala event. The media labels…social conservatives…liberals…blue state…fundamentalists…were not here at this party, if they even exist?  We were all celebrating in one way or another, all optimistic about Kansas past, present and future. 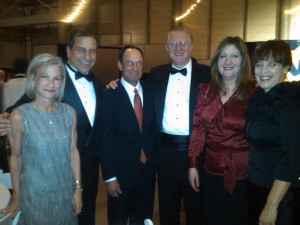 The guy to my left invited us to the party. He was one of,  and I think a head honcho of the party planning committee though he’d never say this, and he did all the tables. He is Pat George, Governor Brownback’s newly appointed Secretary of Commerce and a native of Dodge City. He is a businessperson and entrepreneur, a former football player, and a friend and business partner of Reggie Jackson, just to name a few things about Pat.

I became acquainted with Pat because he is a 2nd generation family friend of the Adams. He and his father sold us our first car, a sporty grey Buick wedding gift from my father-in-law Raymond Adams. He also gave us our first hunting dog on the e. XIT where we lived, George Lapsley Waugh Adams (see Tack Shop-Painting-his dogs for Lapsley’s portrait). Lapsley was a German short hair’d pointer puppy acquired in a car deal by Pat’s dad. Pat hunted on the ranch where I lived and we pal’d around together in the 80s in Dodge, eating burgers and calf fries (technically these were more like bull fries for they were cut into strips before the batter dip) at Cowtown on E. Trail Street.

He is everything you would want in a politician, a businessman and a fine person.

I don’t know how Pat and his friend Ed Condon met for Pat knows everybody, but Pat hooked us up with a great table of KC folks. A story: Ed’s license plate says CVN77, the tenth and final Nimitz-class supercarrier of the United States Navy.[1] named for the 41st President of the United StatesGeorge H. W. Bush, who was a naval aviator during World War II. Ed’s admiration of the Bush family connected him to George W. Bush who said of his father that if Ed were to get his signature that he’d have the autograph of a great man.

Ed’s wife Linda is an executive but currently serving as professeur to children she homeschools in Leawood. Only the best for the Condon kids and she is it. Not every family has this level of in-kind services.

I was so pleased to meet Lori George and her great crew that evening.  She is beautiful, funny, and completing another degree in secondary education while holding down the fort for the George contingency. We shared a part-time gig, substitute teaching. She’s also good at sports, volleyball her forté 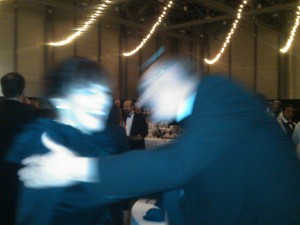 Ed wanted a picture giving a kiss to Lori George. “Hold it” ….”longer”….”don’t stop”….”there’s a delay between flash and photo” is Paula trying to educate her subjects with yet more information. 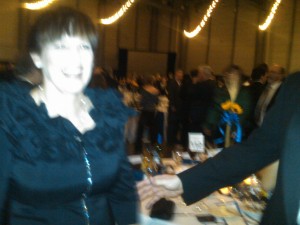 Lori, exhausted. Sometimes you just have to walk away from the job but she does it with a smile.

We never got it, but the thought is there and we all felt the love, though I can’t speak for Lori.

We sat with Frank and Robin Sterneck and the Condons thanks to Pat, but I have no picture with the Sternecks. We were friends from our children together at Pembroke Country Day. Their son Trent worked on Governor Brownback’s campaign and Trent, Jack Adams, and Pembroke intern to Sterneck Jake Myron were high school buddies in KC. Some common family business ties to Tulane people and New York places and family and kids and education made for great conversation. Robin came to KC as major GE exec but I knew this from others, she never said a word. She serves on the Board for Pembroke Country Day and could not be a better addition.

Sterneck Capital Management, Conestoga Energy, southwest Kansas and Kansas City and Kansas ties make us all bedfellows that were able to meet, re-connect, have fun, and celebrate that evening. Thank you, Pat, for the invitation to the party and great piece of real estate at the function. 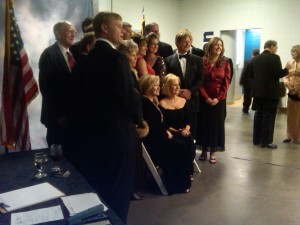 Now we’re all neighbors, but here are our next-door neighbors and I cannot be more literal about that: Stephanie and Rock Ormiston, second from the right-front-to-back, décolleté and surfer blondie.  Steph and I got to dance (women are always the best partners…we both get to lead and to follow in perfect sync) and we all looked mahvelous. Nick and Lisa live down the road and we were able to meet all of the Conestoga people. 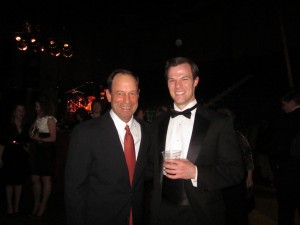 I spotted this handsome man right away from the Christmas card my mother had sent on to me the day before, a very sophisticated and artful card I might add. He has all the looks, poise, grace and charisma of his parents and the Stauffer grandparents that I know, I’m sure his others as well.  He is working on a PhD in finance in California and could not have been nicer to take the time to connect with us, the “we know your parents” unknowns.  I met his beautiful sister and when looking for Mary, his dad hooked us up with another young smiley Brownback who graciously ushered me on a search for First LadyMom at 10:45 who we never found. You know you’re in Kansas when the band stops playing at 11:00, so if I were her, I’d have been getting my wrap.  They make it look easy, but I can only imagine the energy it takes to give of yourself to community, state, country and to serve in public office and raise a family. Mary gave a wonderful speech which I have in video but my cinematography so poor I’ll not post to utube.  Here’s the point about the governor and first lady:

“If you mess up your children, nothing else you do really matters.” 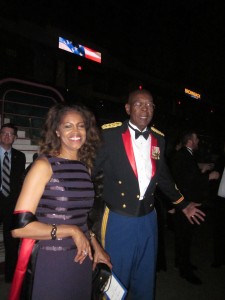 Best dressed duo at the dance.

I am embarrassed that I do not know who this is at the time of print, but they could not have been more a more handsome and gracious couple to the woman with the camera. For anyone whose made it this far, please post. 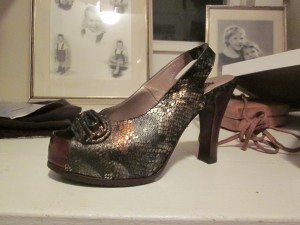 Award to person who liked their party shoes the best: Paula. An honorable mention to Rock Ormiston.

And last, some credits to the wardrobe committee done by phone and email with project managers Genevieve and Erin, Brick’s, Wichita.  It’s not easy getting dressed on the Cimarron River in Meade County, but this team of colleagues all get the job done. They open-mindedly listen to the funky suggestions of high maintenance creatives like suede boots but shape it into a tasteful and fashionable closet item(s) to last well beyond the event or year.

Thank you for the help. 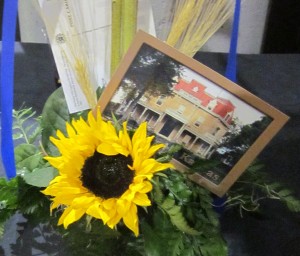 Thank you for the evening to remember.  We enjoyed your good film, good food, good friends, good funk, good fun, good family, good future, good favor: Love the postcard and the sunflower lives on in Kansas.

One comment on “Just last year? A fun night with our groovy new Kansas guv and KC people.”