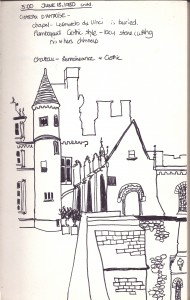 I was avoiding doing this post because I didn’t really like the sketch. It’s growing on me…

If you’ll look at this link to Chateau d’Amboise, you can see I’m sitting on the edge of the wall while I am sketching and the perspective is not all that bad. I still don’t remember how the grade happens to drop off so steeply at the wall. It must have been built into a hillside.

This is all my notes say:

Flamboyant Gothic Style-lacy stone cutting. His and Hers Chimneys.

Leonardo came to France at the age of 64, but this gives me an opportunity to talk about his work before that time.

This is a good link to Leonardo’s life. Skim to the letter of introduction he wrote to the Duke of Milan, Ludovico Sforza. I found this interesting because he was educated and formally trained in art. He had been working as a painter with successful commissions for some time now.  He is 30.

The letter to the Duke of Milan.

He is listing his capabilities as a designer of both civil and military machines. Italy at that time is internally divided by wars between city-states, followed by an invasion of France. Military engineers were important figures, for this was a time of rapid development of firearms and explosives. Leonardo lists many ideas for fortifications, bridges, weapons, and river diversions to flood the enemy. At only the end of the list of the ten ideas, that he notes his artistic capabilities in a post note.

“Also I can execute sculpture in marble, bronze or clay, and also painting. In which my work will stand compation with that of anyone else whoever he may be.

Moreover, I would like to undertake the work of the bronze horse which shall endure with immortal glory and eternal honour the suspicious memory of the Prince your father and the illustrious house of Sforza.

And if any of the aforesaid things should seem impossible or impractical to anyone, I offer myself as ready to make trial of them in your park or in whatever place shall please your Excellency, to whom I commend myself with all possible humility.”

There was no reply to the letter, but he was summoned to court one day where it is said, “he was the least nervous of the pair.”

In 1502, after working as a celebrated painter and engineer in Milan, he returns to Florence. He meets up with Michelangelo, but Michelangelo mocked him about an unfinished overambitious design for a bronze equestrian statue. Leonardo was deeply hurt, so they were never friends despite having so much in common.

They were both commissioned to do murals in the Palazzo Vecchio which neither finished. This might be due to a different focus for needs of the time. Both helped lead a revolution in anatomy. Doctors had formerly relied on textbooks and past practices, but artists and doctors alike changed this tradition. They began to dissect bodies and recorded the results accurately. The work of artists and doctors during the Renaissance was often very similar. This was also the time of his interest in flying and bird flight sketches.

He moves to Rome in 1513 and continues to work for Giuliano de Medici in the Belvedere Palace of the Vatican. But, it is a time of frustration and illness for Leonardo.

By the time Leonardo is summoned to France in 1517, he is a very sick man. His right hand is paralysed from a stroke. The King did not require he fulfill commisions, and he spent time organizing his notebooks.

But, that doesn’t mean he didn’t have to earn his keep.

“Leonardo had to suffer frequent royal visits and produce plans for festivals and plays. The King would enter the manor house of Cloux via a stretch of tunnel connected to the castle at Amboise. One of the items Leonardo made for him during this period was a mechanical lion with a breast that opened to reveal lilies.”

Leonardo died on 2 May, 1519 just after his 67th birthday. Therefore, I don’t know why I wrote that he was buried at Chateau d’Amboise. Other records say he was buried in the Church of St. Florentine, but his remains were scattered during the Wars of Religion.

Giorgio Vasari would write in his biography on Leonardo that,

And last, I hope that Leonardo had a lovely time in France in his later life. I will think that he ate beautiful food and enjoyed the French Countryside as a guest and companion of the King. And best to us, looking over his sketches and putting them in order.

This wouldn’t be anyone’s favorite of any Jean Dominque Auguste Ingrès paintings, but it depicts Leonardo giving his final breath to François I.