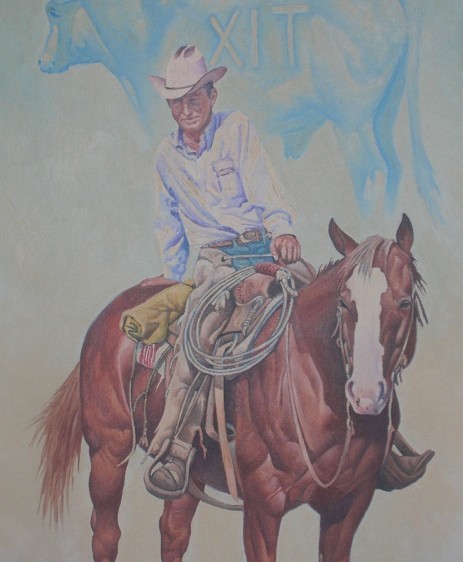 Very nice stories. I loved driving past the XIT on my way to LA. in the winter, when there was no heat or humidity. Keep up the great reporting.
Tom

I don’t think I replied to your post, Tom. In desire to not impart any misleading information, I  have to tell you that the XIT Ranch in southwest Kansas and the Oklahoma Panhandle is likely not the XIT that you passed on your drives.  The XIT Ranch feels they are THE XIT RANCH, if not everywhere, than in Kansas.  They have been under family operation under the Adams Cattle Co. for over a hundred years, so this is deserved.

They don’t have a sign, the relevent people find them. I have well-drawn maps for others. I do hope for a nice big neon “Party Ranch” sign for the kids someday. This will be executed by another best, local, family business Luminous Neon of Hutchinson.
The XIT Ranch in Texas does NOT stand for this:

T (Texas).  The brand was to thwart cattle rustlers, but I have no history of the actual reading of the X I T. It did cover land in ten counties in Texas.

A brief history of the “other” XIT Ranch in Texas.

In 1879, the Texas legislature appropirated 3,000,000 acres of land to finance a new state capitol for Texas.  In 1882, the legislature made a deal with Charles and John Farwell of Chicago to come up with the money:  $3,000,000.00, provided by a syndicate led by the Farwells of mostly British investors, in exchanage for the 3,000,000 acres in the Texas Panhandle. The XIT Ranch began operations in 1885, but timing was bad. Cattle prices crashed in 1886. It was only in operation as a working ranch for 27 years. I wonder if those Brits were annoyed with this investment? Nonetheless, the land deal left us with the beautiful pink granite Texas State Capitol in Austin.

But, every feedlot, feedstore, etc. in the area keep the XIT in their business name. I’m sure there’s some remnant of the original. I’m thinking, Tom, that you were maybe driving through Dalhart? I want to hear your L.A. to Kansas path.

Unlike a Ranch name of which there can be many, only one XIT brand can be registered per state. It used to be that a brand was still required in the state of Kansas to sell cattle within a sale barn, and it still increases price of the animal.

A word about brands…

So back to how the Adams of present have the XIT Brand and the XIT Ranch.

John Adams grandfather, Raymond Adams, Sr. was the youngest son of H. G. Adams. Horace Greeley (Go West Young Man!) Adams acquired the original landholdings upon which the Adams family descendants now ranch. The land is in southwest Kansas and the Oklahoma panhandle along the Cimarron River. Ray and his father formed the Adams Cattle Co. in the teens. In the next generation, early cornfeeding of Raymond Adams, Sr. and Jr. enabled them to buy back 2/3 of H.G. Adams original landholdings. Thus, having the two XIT East and West Ranches which anchor the land along the River. And, with a little help from the marginal land given to this youngest brother which turned out to be quite a historic “field”.

But, the point is that the youngest son of H.G. Adams had these XI cows and lost the flip with his brother for the brand. He had to change the brand to mark the cattle. There was no XIT brand in Kansas, so he added a “T”.

More history on this brand. All brands have stories and some have intricate ways of reading, as noted in above book.

Here’s how it worked:

Here’s a picture, just for the ladies, this is from National Geographic. The XIT and XI Ranches are neighbors and “neighbor” (a verb) when they work cattle.  H. G.was married, now both happily. Cooper got fan mail from this and they are not easy to find. They were mainly disappointed that there wasn’t more mention of the ranch in the article. 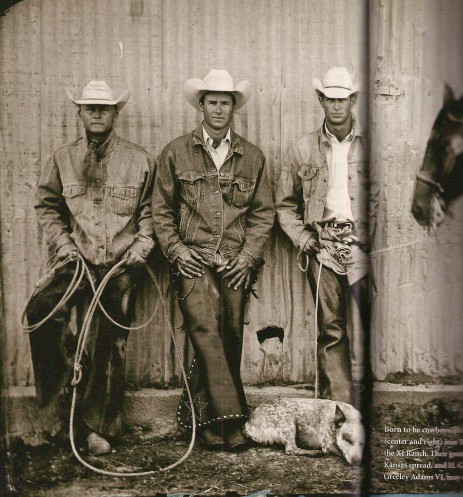 And more about some interesting former owners connected with this historic ranch, ending at this point in time with the Adams. Summers was in business with William Robert of Preetz, Germany.  Robert physically lived on the ranch, and actively ran the operation.  William Robert had been John Chisum’s accountant and bookkeeper in Anton Chico, New Mexico. This is Tom’s department (the movie, that is), but John Chisum was a famous New Mexico Cattleman. The Lincoln County Wars were depicted in the Emilio Estevez version of Billy the Kidd.

Family rumor has it that William Robert left when it got wild down there.  He was the well-educated money guy, so he had to be along to do the deal.  It still works that way, you are there to count the cattle when they go on the truck. Wherever there is. I don’t know if another responsibility might have been keeping the unruly cowboys in tether when they shot the lights out in Dodge, wearing their fancy duds.  This may have been a one-way, one-job deal for cowboys at that time, so Chisum could cut them loose with no responsibility.  It’s expensive to feed them on the way back and put them up for the rest of the year.

How ranching worked prior to closing of the ranch, after Civil War and during the time of the cattle drives…

Before the range was closed, anyone who bought land along the river (and was a bit of a b@d@a$s) ruled. They ranged off uplands and their neighbors. There were many, many more neighbors at the time, even in the Panhandle. They were the settlers who were enlisted to take the West from the Indians with the 160 acre gift from the U.S. Government. This was somewhat of a folly with the type of land and rainfall in southwest Kansas, particular along the hilly Cimarron. Though there are still remnants of houses on the ranch, they were soon bought out by speculators. Anyway, Roberts had scoped it out and bought into the partnership with Summers.

Another note, William Robert was married to John Chisum’s niece Sally Chisum. Sallie never lived at the XI Headquarters, though they had two children together. She held court down there with the cowboys and Billie the Kidd, much more fun. I’ll get a picture, but that’s another story. There’s some Roberts marrying Adams, and later, some descendents marrying back into Adams. All very interesting… 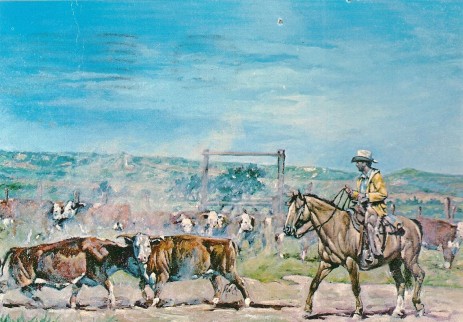 Here is another picture of my late father-in-law, Raymond Adams, Jr. that hangs at Wall Drug in South Dakota. If you do a driving trip to the Badlands, Old Faithful and Crazy Horse, look it up.  It was also painted by Keith Avery, the illustrator and portraitist mentioned above. Keith Avery was most renowned for magazine covers for Western Horseman.

The subject, Raymond Adams, Jr. (Raymond Adams, Sr.’s eldest son) was quite a cowboy, as are his sons, as are their sons and daughters. You do know, some of the best cowboys are cowgirls, don’t you?  His was the generation whose fathers had them start doing the skilled (and grueling) work of the Cowboy. This was also a necessity with the introduction of  labor laws and taxes. You know, that year when everyone’s grandfather’s office had a fire.  Income taxes were retroactive. 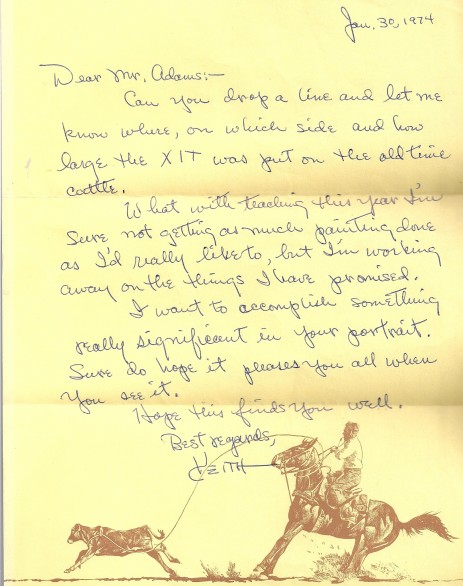 My father-in-law and John are very proud of this portrait. I think my father-in-law had some problem with the way he did the horns, it wouldn’t be proper without this.

So a final word about historical misrepresentations to come full circle…
This picture at Wall Drug is printed on a postcard you can buy in the Gift Shop. It is captioned, “Here Comes de Boss” and describes the location as “herding cattle on the XIT Ranch in Texas”.  I brought up it up at a family dinner that I thought this needed some correction. It was political, I’m not blood kin, so I dropped the issue. After his death, I shot a letter up there to the curator, and it it is now corrected. It had to be done.  The visage and profile are so obvious to the portrait in the Headquarters home I provided. They were appreciative to have the letter. So, if you buy the old postcard when you’re there, you’ll know the real story. Unless they’ve re-printed it with correct information. In that case, please buy me some, I’ll send you a check.

So, if this seems like shameless marketing of history and anecdotes via Tom Rooker-producer-of-Hollywood-Films-a Johnson- County-Resident-Clint Eastwood’s-campaign-manager-and-personal-buddy-when-he ran-for-mayor-of-Carmel, so be it.

The theme is historical accuracy in my mind with a few stories thrown in.

I fact-checked on everything but Tom, so professional of me when posting on a movie producer’s wall.  He sent me this message on FB.

Tom Rooker The class president was Tom Weary. Thanks for the clarification on XIT locale!

8 hours ago ·  ·  1 person (this was me)
So, the title of the post has been changed. STUCO was a much harder job than…. planning the reunions?  Do our class officers do this? He did a splendid job of organizing our picture at the 30 year.