a few men and fire stories… 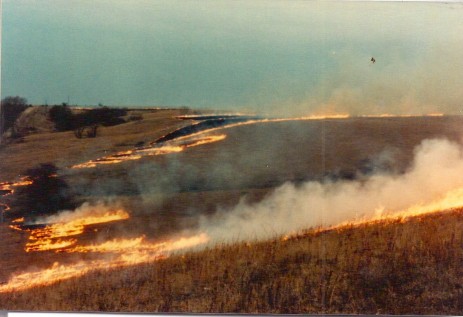 I was in the Flint Hills yesterday for the Symphony.  It was beautiful, very green with the recent rainfall. That’s a later post.

I have been looking at all the FB posts on fires in Arizona which brought thoughts of fire in my sphere. I have never lived in the Flint Hills, but I have visited the Maple Hill Ranch in the spring when all Adams brothers were burning pastures.

The conditions have to be just right.  A recent rain is requisite, but it has to be dry enough to get a good burn. An overgrazed pasture can’t be burned. If there is no grass left at the end of the pasture season, there won’t be enough for a fire in the spring: graze half, leave half is the rule of thumb. And, the wind is important. High winds are of course hazardous, but a light wind gives a good burn. Winds in Kansas are tricky, particularly in the southwest.

The burning season was traditionally March when there were longhorns in the Flint Hills. It is now more often April to prepare for putting cattle out in the summer. It’s generally accepted now as a good environmental practice, though there are safety precautions in place. I’ve driven I-35 KC to Wichita a time or two when the smoke was so bad everyone had to pull over to shoulder. As well, I don’t think the Prairie Chicken falconers are so thrilled with the practice.

The first step is backburning. Fireguards are laid down along borders in direction of the wind where there is no natural block such as a plowed field, water or roadway. As we “neighbor” in western Kansas for branding and weaning, Flint Hills ranchers often neighbor for controlled burns.

It is important to act on the right day and there may only be one chance. When I was working on my Academic Master of Architectural History Thesis on Mill Creek Skyline Road this came into play. Leland Schultz, the owner of Henry Grimm’s I-House (just across the road from the Flint Hills Symphony last night) specifically told me that it was not a good day for my KU Professors to come out. It was on their agenda to take a play day and photograph the family cemetary on the river. I relayed this and gave warning that they should forgo their plans. But, they headed out. It cost them access to the property for their teacher’s class meeting that summer. And they learned before the National Vernacular Architecture Forum Tour the next year. When the rancher says, “keep out” , you keep out. There’s a reason, he’s not out there riding around on his horse playing cowboy.

The story I told today on a post is one that the father of my children would rather forget. It endeared him to everyone in the county. We were in our twenties and living on the east side of the ranch, south of the Cimarron River in Beaver County, Oklahoma. And, the tamaracs and brush were multiplying quickly on the river.

Tom Flowers, soil conservationist for Meade County, noted that the brush has increased 40 fold since 1982.  So, John was actually on top of things. He did all the backburning and reported (I think he reported…) it to the county that he’d be doing a burn. I have to say, it’s not as popular or common at all in arid western Kansas so he may have skipped this part.

It was all going fine, but as happens in southwest Kansas, the wind picked up full speed on a dime. It still would have been okay, but there was a 30′ steep embankment along the north side of the Cimarron. The wind hit that fire and it rolled up that wall to the adjacent neighbor’s pastures above. That was a long night and next morning. John felt terrible, foolish, inconsiderate.

The reality is that everyone likes to come out for a fire. The volunteer crews and trucks came from Meade and Beaver counties. Maybe even Seward came by for the fun. John Adams is a good neighbor and steward, he keeps up his fence, and he will help anyone. Everyone was very sympathetic with how bad he felt. It was kind of a “welcome to the neighborhood” fire since John hadn’t grown up out there and had a few different practices. The neighbor on the upland side whose pastures were burned was thrilled. There were no cattle out at the time, so his spring grass had a great stand.

My job during all this was to run the sprinklers in the yard around the house. John’s uncle was burned out due to an electrical fire one year, but nothing has ever been close enough for me to feel that this was really necessary. I’m sure that’s poor judgement on my part. I always think I’ll be able to see it, run out, and get it all watered down in time. I have similar thoughts about going down in storm cellars, going into the right corner of a store when there are sirens, outrunning a tornado, or outrunning a buffalo that found it’s way into our yard. But, those are other stories.

So, we don’t do any controlled burning anymore on the ranch. And, this ensured that the local crews got an even bigger donation from the XIT Ranch from this point on. These are great men.

There are many naturally occurring fires in the summer due to lightening in southwest Kansas. When there is dry lightening, everyone is on the lookout throughout the night for any signs of red in the night or smell of smoke. It is difficult to judge how far away a fire is. With everyone living miles apart, one keeps an eye out for himself as well as his neighbor.

That’s about all I have to say. Except that, I think the guys all love it and it seems to always go into the night. I’ve never seen any women at the party.

I guess I would generalize that some men maybe like to play with fire. I have a good friend who’s little boy set their yard on fire playing with matches. She, of course, was very aware of all psychological makeup that this might impart having some concern. She said it wasn’t a popular thing to bring up in playgroup. He had two older sisters, so he probably just needed to get out of the house. The son is now a wonderful, successful, smart college bound male, no problems. He was also an intense long distance runner as a little boy. I’m sure he’ll go far.

I guess it’s just guys with a lot of their own energy playing with nature’s forces. And learning early life lessons about partnerships and who is ultimately in control.