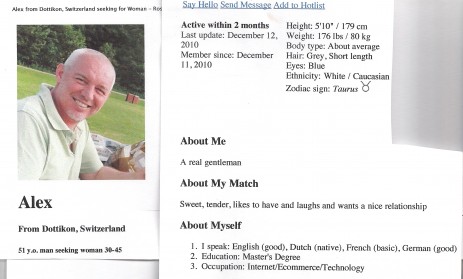 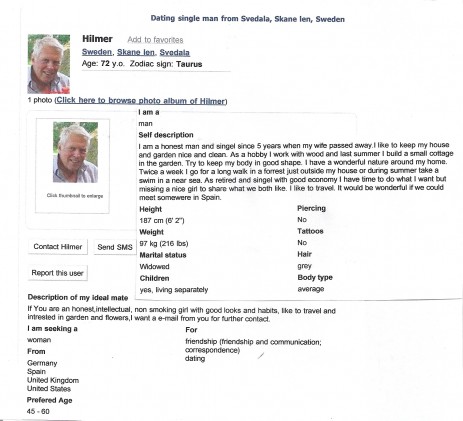 Because there are no sketches and no travels within this sketchbook journal entry,  I’m starting off this post with a good visual of two European men. I have a vivid picture of both Hank and George kind of blended into a very masculine Swiss-French athletic what I thought to be older man. Sometimes he has hair, sometimes he does not. I even get these two men and their names mixed up within this journal entry.

But, I could not find a picture of a Swiss man doing calisthenics on the internet, so this is where I landed. I started with men in 50s (see below), but then upped it a bit. I had to look in both Sweden and Switzerland dating services to get even close to the look, but basically they’re both nordic or celtic or something, aren’t they? Anyway, I have another young Frenchman I’m going to market along with two bachelor cowboys, so I thought I’d just throw them in the mix. They both are widows and they both are Taurus’s which I thought was interesting.

J’ai reveillée at sept heures (7:00 am) and went downstairs to run. Hank (the athletic) one was downstairs in gym shorts & tennies kicking around his legs and looking very swiss-man’ish.  He is very tan with a little hair that is sort of grey-white.  He stopped his exercising long enough to demander où je vais (ask me where I’m going).  I told him & asked him about a good 6-mile route (after taking about 5 minutes to figure out 6 miles in kilomètres!).  He drew me a map which was great, although I still l’était perdue (lost it) before I’d even left the Auberge.  It was drizzly & grey, but still so pretty!  You can hardly see the Alps because of the fog.

I returnedd for petit-déjeuner (café, et un morceau de pain avec beurre).  Today I helped in the kitchen, but it is very difficult to understand because

2) they act like they can’t undersatnd if you use the “vous” (formal-what we’re taught to use in school) form to address them.

[I think the Geneva trip activated the immediate gratification shopping chemicals. These had been dormant after first part of trip when I was occupied with history, buildings, and sketching. Then again, there were not really architecturally significant buildings I can remember in Morzine. It’s like a resort town].

For lunch we had this crudités salad thing and …Rabbit (lapin)!!  [attention Ginna Getto].  It was very good-sort of a white meat. It was served with little white potatoes w/ brie and fruit for dessert.

We had a phonetics lesson at 3:00 in the bar-café.  I’m with the advanced students.  Pretty interesting.

Dinner at 7:15.  Pizza that looked good but different, real tomatoes and stuff on it.  After dinner, I talked with George who I thought was the cook, but was not.  He is a tennis instructor at a school & also at a hotel on the French Riviera.  (The School is in Antibes & the hotel is the l’Hôtel du Cap d’Antibes which is the hotel where Hemingway, Fitzgerald..maybe Murphy’s…[the other couple that were in Kevin Kline’s de-lovely Cole Porter movie] hung out in the 30s).  He was very interesting, on vacation, and un petit peu fou [crazy], je pense, but very nice.