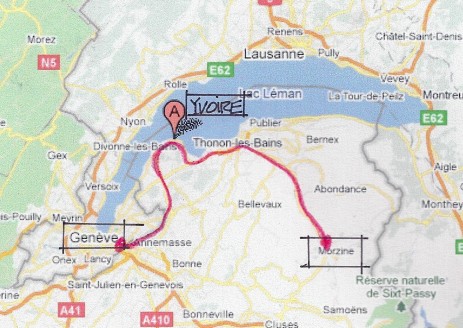 Our bus route from Morzine, France to Genève, Switzerland.

A bit of background. While we were at the Auberge de Jeunesse in Morzine (French Alps) we did intense French lessons. But, there were two days of sidetrips. After study on a rainy Monday, we were rewarded with this trip to Geneva.  I’ll just begin from the sketchbook. 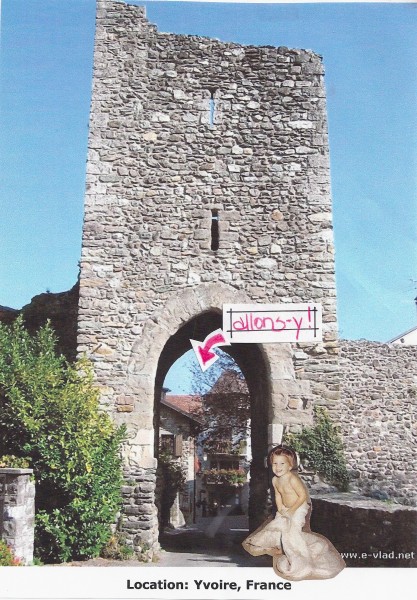 Stopped at 11:30 at Y’vroiy (sp?).  Small, medieval walled town that reminded me of San Gimingniano [San Gimignano, Sienna] in Italy. Lunch there.

[Yvoire is a medieval town in Haute Savoie on the shores of Lac Léman. It dates back to 1306. It was an important town on the trade routes through the Alps and along Lac Léman. By the 16th c., Yvoire had lost its strategic importance and had become a fisherman’s village. There is a beautiful château on the bank of the lake with turrets, towers, and a demanding position at the entrance of the yacht towers of Yvoire. And, the flowers are lovely.]

We were in Geneva from 1:00 to 6:00. Beautiful, beautiful city!! The feeling of Rome, but more polished and glittery, yet not artificial because it is still old. Very cosmopolitan feeling! I felt very important.  All the $ is just overwhelming, though.  Blocks and blocks of banks, jewelry stores with enormous emeralds & diamonds, & every designer one has ever heard of! Stores that you wouldn’t step into unless you were dressed to the teeth & probably not then! We went into the McDonald’s there & a Big MAC is $2.50.

Sent a white chocolate to Robb [Robb Edmonds was my part-of-the college-time boyfriend who was working in Washington, D.C. as an intern for Kassebaum, I think] at Georgetown which was really fun to do! Felt very touristique!!

The people were very nice, & I’m beginning to understand without having to ask questions, ask to repeat, or ask to speak more slowly.  People also seem to think by this time that we can speak a relative amount of French fluently (as long as we don’t speak too much :)! )  I think our tongues are loosening up a little & we’re not as halting as on our arrival. I made 2 purchases.

[I am always money conscious and worry about running out of money. My grandmother lived to be 97. This doesn’t mean I don’t spend it extravagantly at times, but I do keep track and my goal for this trip was to come home with money in my pocket to give back to my mother (parents). I think I was realizing how much spending money had been given to me and the great experience my parents were providing for me.]

One [purchase] -an aqua soft, soft sweatshirt ($17 or $18) that is possibly for mom-possibly Gina.  I bought it at a place called Blondino’s (like Fiorucci) [Italian store started in Milan in late 60s, maybe still around?]. It was wild! Bright colors & sort of punk-pink topsiders-yellow penny loafers etc. It was worth it for the bags alone.

I also made another purchase-for myself-but probably for sharing in the family [the 3 Graves girls; mom, Paula, Gina, as the Adams girls;Lacy & Paula, shared clothes].

[This was a rationalization, I don’t think it was anyone else’s look and Gina was at ASU. Distance and heat would make impossible and silly].

[we called these Fair Isle in US in 1980s at KU for any sweaters that had a yoke. In Kansas, it was a loose term for any stranded color knitting specifically with this neckline, not necessarily having any relation to the knitting of Fair Isle or any of the other Shetland Islands. It was a Kappa signature sweater. They wore them backwards with buttons up the back, a great look which made me wish I’d pledged Kappa at times, along with the keys & fleur-de-lys. The one I bought looked Bavarian.]

Note: I took knitting at Yarn Barn in college and I tried to knit a Fair Isle one once. I had mastered Fisherman’s knit and knitted them for me, mom and Gina. I never got the tension right on the Fair Isle, very difficult. So, I’m sure that not being able to make one for myself and the very cold rain without the proper clothes were both additional rationalizations for flipping out this kind of $.

I don’t want to say what I spent, but I do want to keep track in this book so I will say. $100.  hmmm….But I do love it!!  I have cashed $150.00 in traveler’s checks so far. My expenses have only been those 2 things, chocolate for Robb (      ) [don’t know why I don’t write this down, must have been expensive chocolate in my mind or hiding money I’ve spent on a boyfriend from my parents like they would care?  I’m sure shipping was exhorbitant] and expenses such as postcards, drinks in cafés, fruit, carrots, stamps, bottled water.

For dinner we had potage, coq au vin, la salade verte, & fromage blanc avec sucre.  It is a white, sour cream type thing that you sprinkle sugar on top of.  Very subtle, but good.

Almost done with Tender is the Night.

Tomorrow-possibly Chamonix if weather is good.