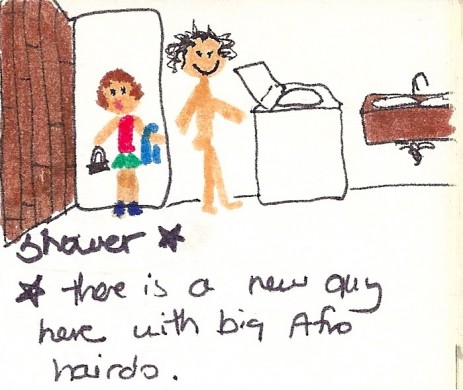 I think I forgot something in my sketch, must have blocked it out of my mind.

I remember being a bit shocked. But, I didn’t want to seem rude, so I just proceeded to the shower.

I wonder if I left on my shorts? Like when we used to wear shorts under our dresses so we could play on the jungle gym without the boys seeing our underpants. And yes, in the Graves family we called them underpants, not panties.  Sorry to all those boys without sisters who can’t imagine girls using such a utilitarian word.

*there is a new guy here with a big Afro hairdo. encountered him NUDE doing his wash when I headed into the shower room today! I said “excusez-moi” & he just smiled and said, “bon.”

[the cold is really starting to get to me. this is when I adopted my european look of wearing knee high socks with sandals which continued with short socks well into my twenties. this was not the norm at that time as it is now.]

5:30- went to Le Lac Montriond-green lake in the mountains made from melted ice that falls from Alps. The melted ice makes the water green.

Went higher up to a little tiny mountain town, Chamonix.  Goats run around all over in hills and on the roof of this house with a dog that tends them. Very cold-about freezing. [my handwriting is very shaky here, so I must also be freezing]

Snow and tops of the Alps can be seen.  Few houses, but those there are built into the ground.

Met a woman on the way up to the lake who was darling!  She said “Vous êtes jeune et bronzée et de bonne santé” or something like that (young, brown & healthy).  She asked if I was running to the lake and if I was staying at the Auberge.  She was from Paris & knew the owners of the Auberge. Very cute-was about 55 and had on knickers & knee socks & sweater & hiking boots.

Raining in Annecy, but it is a really neat town.  It is on a lake and there is a big, long stretch of park, grass, flowers, benches. We sat in a café ’til it quit pouring & then walked around.

The women there were really pretty. It really was noticeable-much more beautiful than in the smaller towns.

There was a cute little bakery with a big crowd around it that smelled heavenly!!  We walked by it & waited to see what the crowd was (mostly Parisians) for.  A fresh, hot batch of little pie-like things had just finished baking & the people were waiting for a warm one.  Nixie bought one, and they were like little cheesy-eggy quiches.

Cous-cous for dinner-I can take it or leave it-