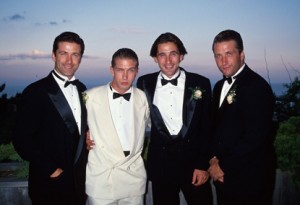 I had a sister and only one male cousin Russ who survived all the women. I don’t really know of any names that Gina and I had for each other behind each other’s backs. We did do a lot of digging with fingernails and biting, but it had to be very quiet since we weren’t allowed to fight.

Having now two families of  brothers within my extended family, I’ve noticed the recurring fond terms brothers use for each other. Not face-to-face of course, someone might get hurt.

It takes three boys to bring this out, four is best. In general, it begins with the younger brother using one of these to describe the older brother.  The older brother is at first, either oblivious or could care less, being so confident in rank and superiority. As life marches on and experiences shake it up a bit,  it starts to work in both directions. Families in business together are no exception, maybe worse, though not in public. It slacks off a bit in their 40s. (see Raymond Adams, Tom Finney, and H.G. Adams II at the Eklund Hotel, Elkhart).

The ones that come to mind are bonehead, meathead, dumb@s$ and %ickh#@d.  This next one I felt was particularly creative:

Younger brother yells to son, “who is it?”