I have to begin the concerts at The Bartlett Arboretum with Robin Macy. 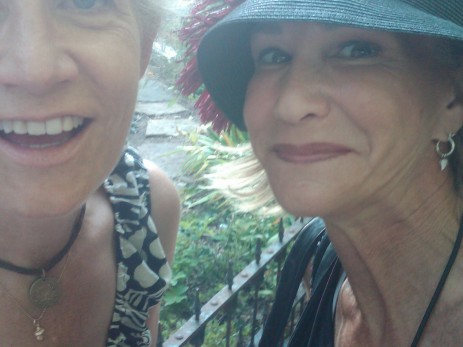 I first met Robin at some kind of architectural function where musicians were playing (maybe architect musicians?). Robin was attending because Mike Siewart, her architect for her home and co-creator at The Bartlett Arboretum, was there and I think was maybe playing.  I didn’t know anyone and was new to Wichita, newly working for SJCF Architecture and my daughter Lacy just beginning her 3 year jaunt at Wichita Collegiate.

There was wine. And Robin refused it saying, “I have to speak to the parents at Wichita Collegiate about the Honor Code and it probably wouldn’t be good for me to be slurring my words.” She had this wild blond platinum curly hair that reveals her soul piled high and some knockout attire that completed the picture, but in no way detracted or distracted from the spirit within. And, a few days later I met her at Parent’s Night. I learned that she was head of the “Go girls” (can’t remember name…kind of a find your light and let it shine in whatever context or era women are born in) group.  And, blessed, the next year she was Lacy’s geometry teacher.

The Angel Professeur at Wichita Collegiate Graduation, May 2006. Wichita, Kansas.

So I better get to the basics since I don’t know if anyone really reads this stuff anyway which are the following:

okay one
The website has most about The Arboretum as Robin doesn’t talk much about herself, but if you ever see the video on early Dixie Chicks, she is in that and here’s the wikipedia link to Robin.
This is Robin singing[youtube]http://www.youtube.com/watch?v=UicERus50Ig[/youtube] 1992. She is the lead singer and guitar, voice like honey.

SYNOPSIS of HISTORY OF BARTLETT ARBORETUM AND ROBIN.

The Buildings
But, one last word about design.  I can’t talk much about the landscape, out of my element. And a picture is worth hundreds of letters I use, so I hope to add more photographs later and edit a little here.
I’ve seen Vaux le-Vicomte, Versailles, Green Animals and lots of other stuff, but this little jewel in Kansas is most special because it is ours: a product of Kansas midwestern work ethic and lots of planning and perspiration.
The house:  Mike Siewart’s design (Wilson Darnell Mann, Wichita) built a second level upon the simple several room brick dwelling that was originally on the property. 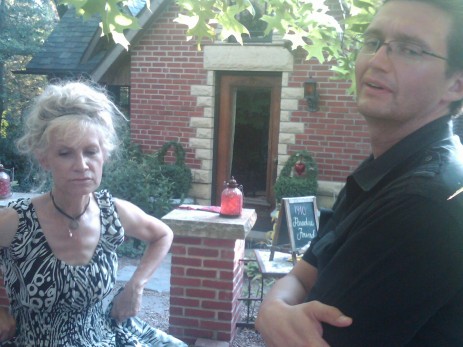 Robin Macy and Emmanuel Magisson with classic expressions. Pictured to actually show the original house lower level in the background.

The Kitchen: This  joint creation of Mike and Robin’s has wonderful stained white concrete counters with weathered patina in the tiny L-shaped workspace. There are only the cabinets that one person needs (husband Kenny has a separate house…the perfect setup), with several doors of antique glass spool cabinets. These were memorable to me as I have a few of these in which I use as drafting tabourets.
The Upstairs: It is kind of a loft space, so the steps are the grand ascent to her bedroom with footed tub and sink.
The Closet:  should be in a period museum and is a painting in itself of boots, petticoats, urban, rural, high, low, cowgirl, play area that is how I imagine a movie costume room to be for a Merchant Ivory Movie except it would be a different movie, maybe Wade’s Even Cowgirls Get the Blues meets Daisy, Mattie Ross, and Coco Chanel. But, never a costume on Robin. She always looks like someone who just transcends time.
The Guest House:  this is where Robin offered for Lace to live her Sr. year. I lived in Wichita for two years, but went home the third. I think it was the old chicken coop. It was really too far for her to commute with activities, but Robin was such a supporter of our family to make this loving offer.  It takes many mothers…or maybe she was Lacy’s sister since Lace didn’t have one. Anyway, Robin helped raise the Adams family. 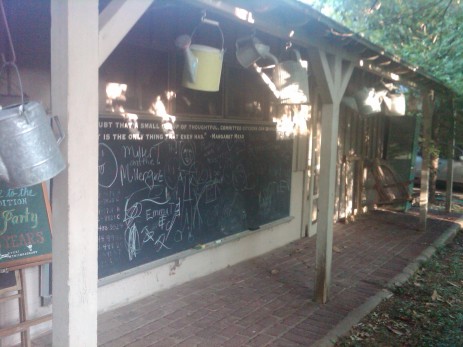 Robin's guest house and some kind of former outbuilding.

Hmmm..only on two? I’ll make this one brief.
The kids and I were gone from the ranch that day, but Robin and her then boyfriend now husband Kenny were on a road trip one day and said, “I think Miss Lace lives around here.” They whirled up in a cloud of dust at the XIT Ranch on the Cimarron River in this dashing convertible to drop in and say “hey” to John Adams. This is always, always appreciated. Kenny is the guy mentioned above who is a musician among other things and lives with his son in the other house on the property at The Bartlett Arboretum.  He is darling with curly curly hair, too.
Here’s the cute pic, I’m so proud of John or whomever took it since the usual photo lady not there. Thank you Robin I’d say. 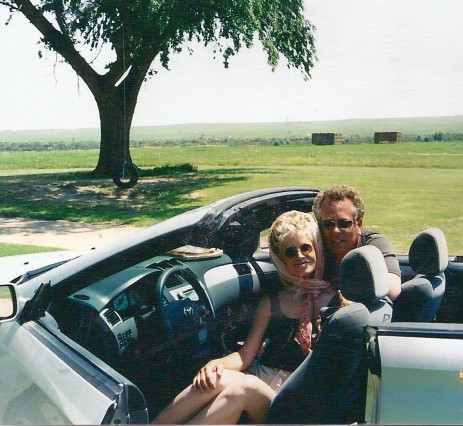 Robin and Kenny in front of XIT Ranch Headquarters where the John Adams family all raised themselves together: John, Paula, Lacy, Jack.

Three:  Robin’s poem toasting Lacy at the Sr. Graduation Dinner at Wichita Collegiate School.
Comin’ outta shoot No. 2, weighing in at 101, no stranger to a saddlehorn or a pair of running sneakers, we now toast our Curly Girl.
Miss Lacy Amelia Adams journeyed the furthest to be with us tonight.
Born and reared on the histori working XIT cattle ranch in Meade County, Kansas (Daddy, John, met me at the cattle cross last year wearing spurts and sweat) this fourth generation cowgirl has much to yodel about.
Our Lacy rode a school bus 60 jies to attend a rural elementary school before her parents decided to send their Little Girl to the Big City for some AP-style “edumacation.”
She has been a very courageous woman, living without her family all year in order to make this dream-come-true.
Lacy was born smiling, from wrist to wrist. She calls ’em like she sees’em and knows all the words to Back in the Saddle Again. Mathematics did not always coe easy for Lacy but she was true to her upbringing:  tenacious and disciplined.
Qualities she surely learned while mending fence or building feed bunks in the summertime- alongside her beloved ranch hand and constant companion, brother Jack.
She was a mainstay in my classroom after schol during her Geometry tenure and I am grateful for those times together.
Always a style-setter this fun-loving madrigal singing trackster nevr said an unkind word about anyone.
No wonder Lacy is loved and adored by her classmates and teachers.
Like her hair, Mrs. Stokley says her vivid writing and note taking is wild and magical.
Lacy heads off to the University of Kansas in the fall where I’m certain she’ll continue to be wearing her sweaters backward and with her infectious laughter, continue to be the life of the party and proving to all who are lucky enough to know her that some of the best cowboys are, indeed, cowgirls.
You can see, life will never be long enough for Robin to refill the pitchers she pours for us all,  sharing so many gifts that she taps into from one moment to another. Her focus on the big picture, caretaker and co-creator of a beautiful landscape, leaves Kansas with her footprint and those of so many others. So, she lives on and will always, putting her energy back into the soils of the earth in one way or another, always with Robin’s soundtrack as backup.

One comment on “Robin Macy, the original Dixie Chickie, Kansas Treasure, soil and soul sister of Mother Earth at The Bartlett Arboretum, Inspiration.”