Calving Part I. Babies is comin’: 4 the girls & men that did it to them 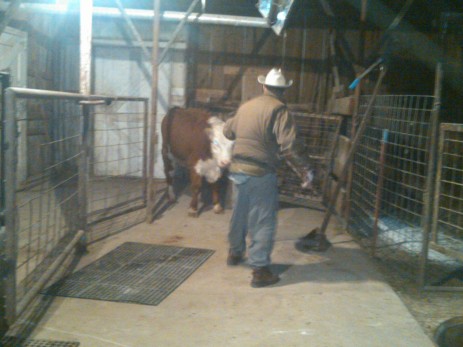 She's not very happy and he not too with her.

First, a little music for you to read by.  I was a childbride, but childless & footloose for five years. A favorite courting technique, John would break into song complete with face and head gestures to serenade, emphasis on the “baay’ beh”. Even not funnier at 8 months. After a four versions on utube, I’m just starting to appreciate it all. Your selection for tonight: Classic Paul in Patchwork and Bowler.

It’s the first week of calving season, John’s week on call as baby dr., so I tagged to barn at 10:30.  Heifers are teen (I hope not really) cows having first calves who sometimes need a little help. They are brought in from the pastures to hang out together in the pens.

Second, the excuses. It’s dark, pics in pens limited, only lights on a pole. With camera broken, I’m filming a blackberry video (I keep forgetting I can’t turn the camera sideways since u can’t rotate videos, I’m sure Steve Spielberg had to learn this too). New skills are all I can do to get unedited to utube, but this is a point in history.

Re-location from pens to delivery room: the calving barn.

I really apologize mama. My style: no cameras and leave me alone when in pain; John seized the opportunity for his usual efficiences to wash the car, pick up groceries, stop by the vet when I thought he was outside having a smoke. But, he was there at Lace’s debut at my head of the table. 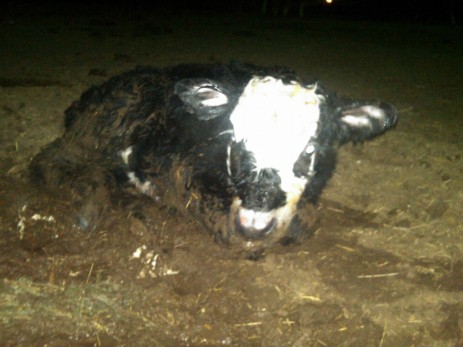 Pass a new baby en route to barn. Mother licking to clean and I scare but she'll be back.

This is more talking about childbirth than I could ever tolerate from about 28 on. All it takes is one long-winded, detailed story relayed by some duo couple in a social situation to be enough for life. 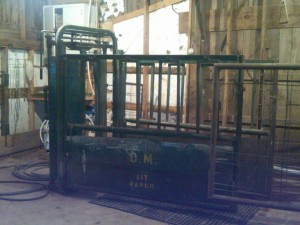 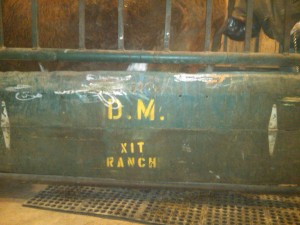 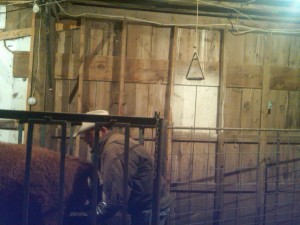 A stirrup, right girls? Hmmm....way up there? Think, think, Paula, before you ask engineering question. I know I can figure out the mechanics.

Pretty much everything designed, mostly homemade and welded right here when it comes to stuff like this. 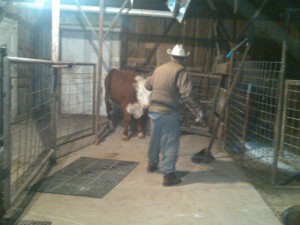 She's not very happy and he not too with her. 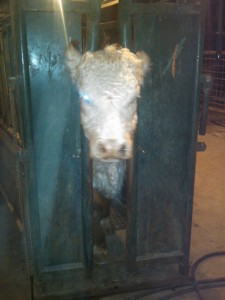 Got her in a headlock.

Dennis Knudsen, former army dr., obgyn extraordinare and Renaissance man I think would secretly love one of these for a few of his clients. A relative on John’s side out here told me (in 80s we took these funny lamaze classes pre-Lacy at local community college) he said , “ooh…kay, that’s enough of that” when she commenced with some loud hee-haws as he arrived for the delivery.

Chapter Two tomorrow. The birth and some videos, more Paul. I’m sure he quit singing a while ago.

Music commentary:  John’s time is limited on computer, but he heard Paul singing and had to come in.

Thanks, Paul for opener that kind of steals my show, but if someone made it this far…

One comment on “Calving Part I. Babies is comin’: 4 the girls & men that did it to them”