Gary does his own work the best. Here he is….

The webbing material is found either discarded or on the side of the road as it breaks with wear. It is used to tie down stuff onto flatbed trucks. Gary used to drive a truck, hauling beef with Kansas-place-of-origin meatpack from the local butcher to a pastrami deli king in California. On his return, he would haul produce back to Albuquerque. Burned out on mode of transportation, but always a Cowboy on the open road. 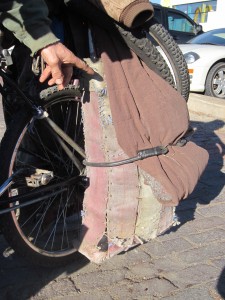 Gary will be headed to Jackson as soon as the snow’s over, so about now. I think the place where he may frequent is called the Mission. He also goes to the library which is where he saw the picture of the Canadians with the bike bags. He doesn’t do internet, but we have a date to connect through the librarian so he can see his post, Paula’s agenda, probably not Gary’s though he politely acted interested. He doesn’t have a cell, so we’ll let you know when and how we rendez-vous, but we will meet again. Paula’s pony express is on it and now I have you enlisted to help. If you pass by Gary, please tell him Paula from Delano says hi.

One comment on “Gary the Grizz on bike bags: utube”