I still have flashbacks to this day at the Louvre. Especially because sometimes even now I will get myself into situations where I am thinking one thing and engaging, but realizing a little too far into it that it is turning out to be something else entirely. And, it usually starts with flattery. In particular, flattery to my work or artwork. This generally happens when I am in the field and drawing, so I am alone. If it happens before I am through with my sketch and the man lingers to talk, it has the opposite effect. I cannot talk and draw. 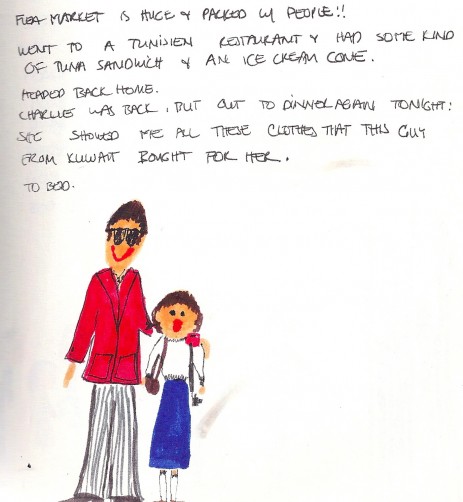 Some Italian man probably just pretending to be an architectural engineer who admired my sketches and me, Louvre.

Went to Louvre & Marché aux Puces this afternoon.  Had an awful experience. This engineer from Rome walked up behind me while I was sketching the Museum of Decorative Arts from across the lawn on the south side of the Louvre.  He was very complimentary of my drawing at present and asked to see others.  Then, he offered to “show a Young American Girl the Louvre.” I was thinking that this sounded like a wonderful adventure, an Italian engineer showing me Da Vinci’s Mona Lisa at the Louvre…

He walked abound the whole Louvre, not really stopping to tell me anything in depth, but speaking with the guards. So, I thought he must be a regular.  Then, he started taking my hands, putting his arm around me, and would touch my face with his hands. I did not like it and it was awful, but I did not really know how to handle it.

He then took me to the snack bar and bought me coffee, speaking with the employees on a first-name  basis. I was embarrassed because they seemed like nice people and I couldn’t imagine what they thought of me as a young American girl who would allow an older man to touch her face.

By the end of the tour, I was just trying to get away but he didn’t seem to understand. I said I had to go home, and he would say that he would take me. I was afraid to go outside. I didn’t know if he would kidnap me or what. Finally, I got away after being downright rude. It was humiliating & awful & I will never get myself in a situation like that again!

Flea Market is huge and packed with people!!

Went to a Tunisien restaurant & had some kind of tuna sandwich & an ice cream cone.  Headed back home.

Charlie was back, but out to dinner again tonight. She showed me all these clothes that this guy from Kuwait bought for her.  To bed.

So, the moral of this story is…

…a woman has to be wary of a man who invites her up to see his sketches.

…for a woman who provides her own drawings, she might think to be wary of the man who admires them.

…unless of course, he then offers some good constructive criticism.