Adventures of the Handy Dandy All-Purpose Ballgown from Wells Street.

The Handy Dandy All-Purpose Ballgown from N. Wells Street was born into the Adams Family on a trip to Chicago in the summer of 1999.  John and Paula Adams were there on a summer trip. I think Jack and Lace were on this trip, because I remember Jack playing with a ball on the steps in front of Nicole Miller. We also bought a black Barbie silk vest for Lacy that I think she wore once, but it will be great for dress-up.

The cumulative total of Balls attended respectively by John and Paula Adams at this time was three.  John Adams had attended the Jewel Ball in 1979.  He had been solicited to escort, but had mistakenly felt he could be absent from parties in June for two weeks to fulfill family roundup and branding responsibilities on the XIT Ranch in western Kansas. When he returned, he had been demoted to the floor committee.  “What on earth were you thinking?,” was my comment when he still seems a bit injured. The other two Adams ball attendances were Paula Graves BOTAR Debut in 1982 (1) with John Adams as her escort (2).

I like to go on record here that John Adams, though he went to Pembroke-Hill, was from Wabaunsee County.  He was living in Lawrence finishing his last semester in business school while Paula was first working at Hallmark as design coordinator and then working at Halls in retail.  Because a BOTAR could choose her escort if she as engaged, John Adams as fiancé was her GOTAR. It tends to be a bit of a family competition at times which holds social rank: being the BOTAR from Kansas City or being the demoted Jewel Ball Escort from Wabaunsee County.

There were two dresses, one a bit more expensive than the other, both very pretty. The less expensive was a crinkly black fluffier number that would look very good on someone about 5’4″ and taller.  The other was this dress pictured below. 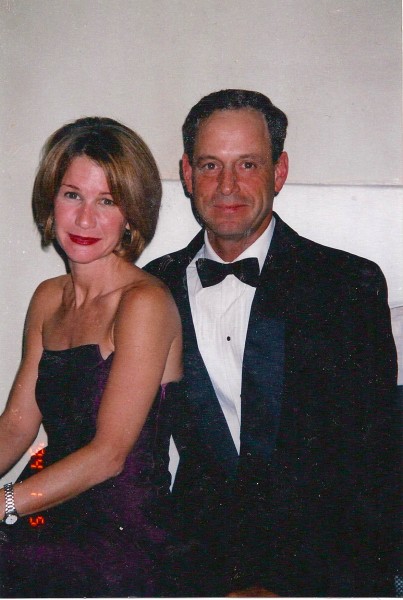 It was column-like with a bit of a flare at the pedestal base. Not enough to be anything tent-like, which is how small women can feel when wearing a floor-length dress. Just enough to make it easy to walk, and more important, in which to dance. The bodice is boned.

Textiles always do it for me.  Handy Dandy’s skin is an aubergine silk that is cross-woven with black. It is crushed into very flat wrinkles.  This gives her a faintly iridescent appearance. It reminds me of an old swakara (persian lamb) coat I have of my grandmother’s or bird’s-eye maple or anything very intricate, but naturally patterned in a tight, small design.

Anyway, after trying on this dress John Adams said, “that’s the one.” For a man who never appears to have any interest in or spends any time shopping, he has a good eye. But, his maternal Grandfather was an artist and had a sign company. And, his father had a good look.  As well, John Adams always looks pretty dapper.

The 50th Annual Botar Ball.  My friend Betsy, whose taste in fashion is impeccable, called me a trophy wife. That was nice, being that I had young children and was slaving through that last semester of architecture school so I could get the job in Wichita for Lacy to go to the big city school. Neither John nor I were feeling like there was any trophy at the end of the tunnel of marriage, children, and attempting to live rural and urban lives driving thousand of miles and eventually getting Lace educated in secondary school 200 miles from home where I would work for SJCF Architecture. It was grueling, but we were moving towards doing it, and we did it. So, feeling like a prized heifer got me through. 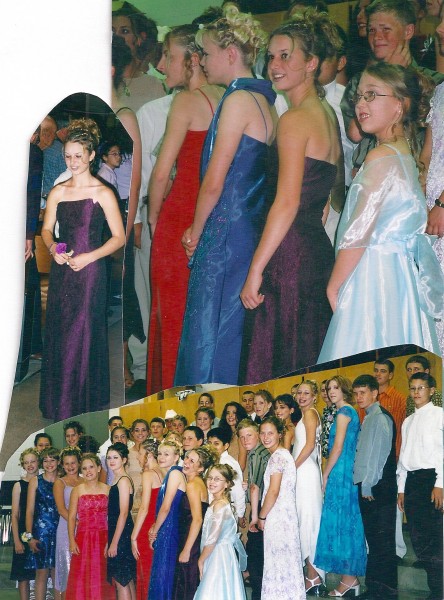 Handy Dandy appeared on stage at the Meade High School for the Meade Eighth Grade Graduation with Lacy Amelia Adams when she graduated from Junior High.  This is a formal occasion, not uncommon in smaller rural towns.  I think my mother told me of wearing a white long dress to her eighth grade graduation, or perhaps this is someone else who grew up in a small town.

I have included the picture of Lacy as she walked down the aisle with the flower that all the girls held.  A local member of the clergy was the guest speaker.  He spoke of Christian values, which at the time I found jarring, wanting separation of church and state education.  But, I’ve lightened up on this and feel it was a reflection of common values that we all held in that room. It was just clothed in a language that was probably not offensive to many, if not most, of the people in that auditorium in Meade, Kansas.

If you will look at the bottom picture of the lineup, you will notice how all of the kids turned so nicely to look at me when I took their picture.  Amanda West is the “even more petite than Adams women” girl to Lacy’s left.  She and Lace get the prize for most effervescent.  Lacy is seen having lost all composure at the occasion.  This happened on several occasions at Meade Grade School performances, at times even taking down the group. But, she was forgiven and loved for her transgressions and has since learned to handle public appearances in full control of her mirth.

When Lacy Adams was asked to be a BOTAR in the summer of 2011, the BOTAR Mother pondered, “what to wear?” Because this frock had traveled across the state and was in the possession of Lacy Adams, I asked if I could borrow it back.

Though I had been instructed from my friend Betsy,”You will not cut off that beautiful dress,” I ignored the advice. I hauled it to my stylists at Brick’s in Wichita, and asked for a second opinion.  “Where will you ever wear a long dress, or more pointedly, where will you ever want to wear a long dress?” they said.  Good point. Not only are they not conducive to climbing stairs, they are not height inducing for the Lillputian. A little bit of leg helps.  And, they don’t show the killer shoes I intended to wear that were also recycled from the Governor’s Inaugural Ball.  Oh, I guess I forgot that, I guess the Adams are at 5 Ball occasions. 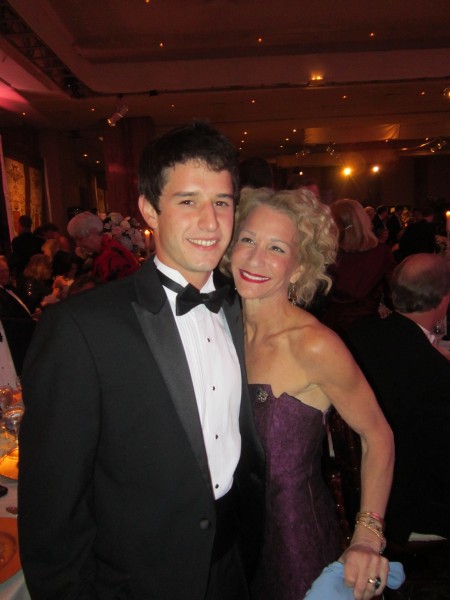 Tuxedo and the Handy Dandy Ballgown with Jack and Paula Adams.

I won’t get into more details or show you pictures of the shoes.  (though please notice how cute my BOTAR Governor’s Pin looks on the little cutout in my dress at my left breast.) But, I will tell you that I was very proud of myself for recycling this classic dress for it’s second appearance at a BOTAR Ball. I could never have found a dress that I liked as well as this one. And I bragged about this to everyone who would listen.  The men, of course, weren’t listening though if they were, I think they would have commended me for my practicality.

One female friend commented, “No one will even notice.” Completely missed my point as I wanted to tell everyone in the room. I am the kind of woman who thinks it’s fun when someone buys the same dress that I have purchased and plans an event where we can wear them together like twins, hoping for a third woman to join in on the fun for a Couture à Trois. Of course, if anyone should think I am too practical from living the rural life, I do have to confess that I spent as much or more on my clutch and bracelet.

So that’s it for now for the Adventures of the Handy Dandy All-Purpose Ballgown from Wells Street. I will keep you posted.

I fully intend to wear if it I ever have a Granddaughter who is either living in Kansas City, or has the opportunity to attend or be in the BOTAR Ball if she has any desire for me to lurk in the lobby and peek in.

And if this seems too far off and murky relative to anyone wanting me in attendance or me wanting to be in attendance, I’m sure I can stay this size for one of my potential grandchildren’s 8th grade graduation, circa 2035.

23 comments on “Adventures of the Handy Dandy All-Purpose Ballgown from Wells Street.”