Calving Part III: Anomalies in Agriculture at the XIT Ranch.

My last and perhaps best Paul Anka selection. Distracting and counter-intuitive to my motives, but makes the post, hang in there until 1:05 at least. But then, you won’t want to leave.  And what mutual conclusion did John and Paula have about Anita, Paul Anka’s singing partner in Europe, after viewing her forearms…? So I think we were right on with Paul being big with the drag queens.

Tonight’s essay is about anomalies. The boss (only works part-time on Sundays) threw me a bone. He helped me with organization of my thoughts and photos. So, you can thank him for connecting the dots that were related in my brain to identify my point before I had one.  Yes, it very often works this way with the Adams… 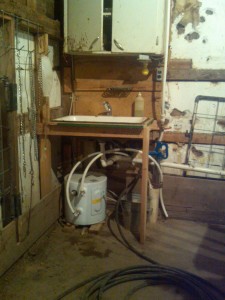 Paula: “That’s so nice of you, I bet they like the warm water.” But I hadn’t ever noticed any post-labor rinse-off for the girls before…?

I was sympathetic after other night in the pens when it was below freezing. There is only a small space heater in the barn, and this was only added in about 1996 when we moved to the west ranch.

I guess cold water is a real shocker after all that hot pV$….well, I don’t say these words, my father might be reading, let’s just say steaminess. See Part I.

So, hot water heater in the barn is anomaly one. Like a rancher with a cadillac, this is pretty high status for the XIT.

Anomaly Two: Baby twins were born Saturday night.
This is always fun. But, the mother cannot nurse two children, so John’s brother-partner brought over a cow from the e. ranch who had lost her baby. This is so the extra calf can “mother up” to the mother who no longer has her calf.

Anomaly Three: That girl is a freak.

John is speaking about a cow that never had any contractions. Being on the same team (females) as the cow and two weeks overdue with my own children, I have other theories for this. For example, she is such a good mother the children don’t want to leave, the calf might actually need more time in the womb, or she’s tired of men pushing her to fit their schedules and going to be difficult.

The point is, for rancher this is a pain:

Inconvenience: he has to stay up in the middle of the night either way.  He can

The vet is expensive (to John the money guy). And a word about vets…The Ashland Veterinary has the best large animal and K-state grads in the region, and also great for cats and dogs.  And cheapest, maybe $175 for labor, $75 for mileage and time. It would be twice as much from Liberal.

And if there is any perceived harshness about mothering tendencies in the video, it’s not perceived; if you’re barren, you’re out after the first year.

Last, I just couldn’t figure out the hanging stirrup from the ceiling conundrum from Part I. If you’ll remember the visual stirrup of a horse and word connection reminded me of the OB/GYN so I was really trying to figure out how she got her legs way up there by the ceiling…Finally, as I did with so many engineering confusions I had in classes at KU, I had to ask.

John illustrates the function of the stirrup in the last frame.

Anyway, anomalies are good. I wouldn’t want life any other way.

One comment on “Calving Part III: Anomalies in Agriculture at the XIT Ranch.”