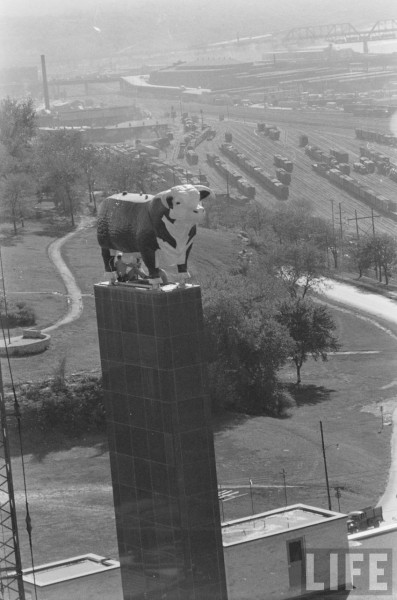 National Hereford Association Bull. Faces n-s politically neutral to KCK, but no bull about it, he faces north. Prevents the newly developing city from forgetting its roots as a cattletown.

In the spring of 1949, newly appointed Senator Harry Darby gathered a group of civic leaders to find a way to interest young people in promoting the American Royal.  Their common passion was the American Royal, one of the country’s largest horse and livestock shows and a unique and legendary event in Kansas City.  The Royal had come to symbolize the country’s good life straight from the Midwest-land, agriculture, animals.

By 1970, after twenty-eight years of existence, the American Royal Coronation Ball was replaced by the profitable BOTAR Ball, raising more than $1.5 million to date in 1999.  The Charles N. Kimball Lecture “It’s All About the Eating: Kansas City’s History and Opportunity” says it all.

excerpt from the lecture:

THE SPIRIT OF THE ROYAL (A hundred years of growin’)

All bricks are bare now, where a thousand cattle bawled.

The window signs are changed where all the packers called.

Though the yards which penned the critters now are bare,

the heartbeat of a city and its spirit linger there.

The ghost riders come at midnight with jingle in their gait,

The agents and commission men are getting figures straight.

Calloused hands with stubby pencils working numbers in their heads,

Hot coffee and cigar smells rousing buyers from their beds…

You can’t quite see their faces or the color of their eyes,

But you know they remember things that you can’t realize.

They keep the blood a flowing… through the city’s veins,

As they lean back in the saddle, look up the hill across their reins…

And see the city growing, see the concrete sprawling out,

Covering up the grassland where they used to ride and shout.

They think about their bellies and the beans they used to eat,

They put the bull on the east horizon, and brought the nation meat.

They are the founders of the city with the cow stuff on their feet,

The echoes of what they did rebound from every wall,

They’re the soul of the American Royal, They’re the ones who built it all!

“The Royal is the symbol of our past; but more importantly, it is the symbol of our future….I thank all of you for coming and listening. It’s an honor for me to deliver the last Kimball lecture of the 20th century on a subject that could be our shining star for the 21st century. Let’s invite the folks who feed us all to dinner.  After all, we still have to eat…and I remind you, “It’s All About the Eating!”

Children and grandchildren and great-grandchildren of old and new Civic Contributors to Kansas City and Kansas in Agriculture, Business, Community, and Preservation participated in this event. It was held Oct. 22nd, 2011 at the Muehlbach Hotel in Kansas City, Missouri. And it was grand!

Here are some very amateurish highlights of the event: 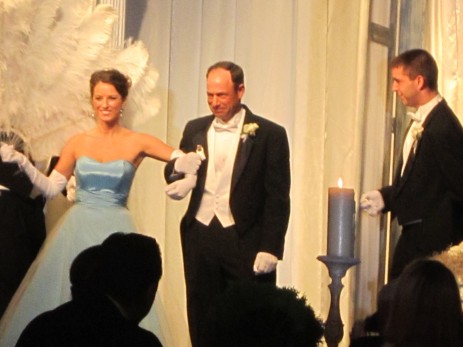 A little tight there, Dad! But I'm confident she'll make a break for it...though always her father's daughter. 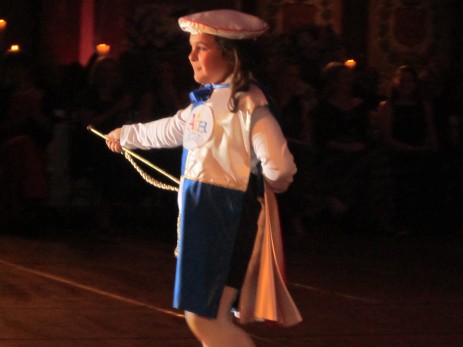 Beautiful Cerise presents...Mama Connie & Mama Paula were BOTARS together. In fact, as petites, they danced beside each other.

Note: One of the ladies featured had a paternal Great Grandfather who served on the Livestock Exchange Board whose Cattle Company, still in existence, was a charter member of the American Hereford Association.  Her maternal grandparents made contributions to Kansas City in the areas of preservation, architecture, and education. Mom and Dad were a BOTAR and GOTAR and continue in their respective fields to pursue work in agriculture and architectural history in the state of Kansas.

This lady BOTAR works in marketing for an agricultural advertising agency  based in St. Louis with offices located in downtown Kansas City. She lives in a loft in the Kansas City Board of Trade Building and walks to work.  It is a block away from three different downtown architectural offices of her maternal Grandfather.  And, Lacy Amelia Adams can herd cattle, vaccinate and build feed bunks with the best of them as

“some of the best cowboys are indeed, cowgirls.”