Dennis Morgan and me, Paula: Myra & Ginny’s protegés. Plus partying and architecture, circa 1977. 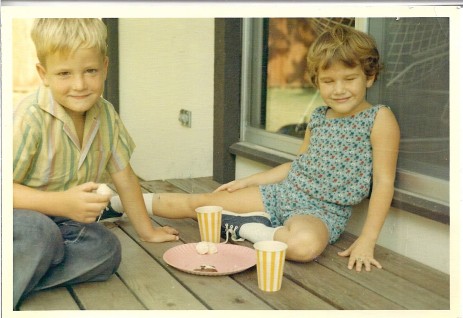 Dennis Morgan and Paula Graves having cookies and milk on Graves patio after our houses were built.

Dennis Morgan was my first friend who was a boy. I have this on facebook with the caption, “He’s so dreamy, I think I will just close my eyes and dream…”

This picture was taken just after Bob Wendt, a Kansas City architect of German descent, finished our custom homes. By the way, Betsy Curry lived in a much bigger very neat house designed by Bob Wendt west of Roe south of 83rd St.

They were very unique contemporary ranches:

That’s enough about the architectural history of the houses here, let’s just say “they were cool, well-designed, well-crafted, well-done functionally and aesthetically.” And, our mom’s made the cookies. Ginny’s nutty nougat (aka snowballs) is still on the plate.

Jim and Myra Morgan, my neighbors.houses mirrored each other and shared a driveway.
Here is a picture from the KC Star of Dennis’s Dad, Jim Morgan, with the kids. Jim and Myra moved to KC from Alabama. Mr. Morgan at that time was an airline pilot for TWA and Myra was a southern belle and mother of three kids, Dink, Dennis and Denise (Missy). Doo, Jim Morgan’s mother, also lived with them. I’m not sure if this was from the outset or after Myra became busier  with the gallery. They both started Morgan Gallery in the 60s after Mr. Morgan had some kind of heart thing while flying and was grounded.

You can google Morgan Gallery, but Myra and Jim had the ins with the art galleries on both coasts in this era taking KC trips to NYC to Leo Castelli’s and Lillian Nassau to buy art and art nouveau. Both were highly creative with all that entails. Jim Morgan collected Arts and Crafts pottery, Roseville, etc. long before anyone else. Their social sphere was fascinating for me, for their friends were quite a bit wilder than the creative-conservatives with whom my parents socialized. 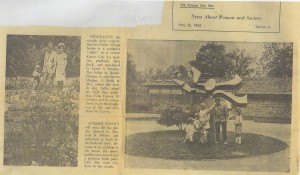 KC Star May 26, 1968. News About Women and Society. Note that Mrs. Jack O'Hara's garden is also featured, so I have included it.

They mention Taffy in the article. Taffy was a really great dog, I don’t know the breed. But I will have to find out. He was a mellow yellow hound of some sort.  Very methodically, he would trot around his two joint estates everyday, checking in and on everything. I’ve never had a dog with this kind of temperament, though it’s probably partially due to the owners.

John Buck Sculpture
The sculpture is by John Buck who was a graduate student at the K.C. Art Institute. This sculpture has had a colorful live, witnessing many a deal and an ordeal between the dramas in the Morgan and Graves families in both generations. But, most importantly, it was home base for kick the can. Dennis has the sculpture in storage and he and Dink have said that I can have it.  It needs a coat of black paint and rust-oleum mixed together. Dennis told me the recipe.
I had envisioned it on my mountaintop at the XIT Ranch. This is the high point along the Cimarron River at the Crossing to where I would run every day, sprinting the hill for reward of the river view. I am confident that the Plains Indians used this place as a burial ground it is so beautiful. I’m not sure it I would have gotten approval, but I know I could have sneaked in onto this place somewhere.

I still want this sculpture, so please don’t give it away if you have not yet already. A bit of a problem is that I may not have any land in the near future where it could be erected.  As will getting it from Dick Belger’s warehouse to the proposed site. And, since it’s a fairly permanent installation involving concrete this does need some thought for appropriate context.  I think it would look great in Santa Fe and likely no problems with the neighbors depending upon the size of the lot, but I’m not sure yet if I want to be there.

I’d mainly be motivated in this southwest direction because you and I could have a great road trip hauling this thing to someplace west of the 98th meridian. As you can see below, we have a history of wheels and road, inherited from our parents, I guess. 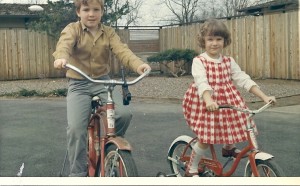 Dennis Morgan and Paula Adams on our bikes. Mine has training wheels.

a) love the picnic tablecloth fabric of my dress, white knee socks with vertical pattern up the leg, and my red Mary Janes.  Kudos Ginny Graves. My mother made me!!

b) training wheels into grade school. Dennis, aren’t they on your bike, too? it was scarring to learn to ride without these wheels with my marine corps father. he is such a patient man, but not as patient with lack of coordination and confidence. Seriously, everyone learns differently. If I had had a physics lesson first, I know I would have grasped concept of momentum sooner.
c) Dennis, enough about me, you look great. :), like the mustard and grey combo.
many loving thoughts,
Paula
(end of letter). 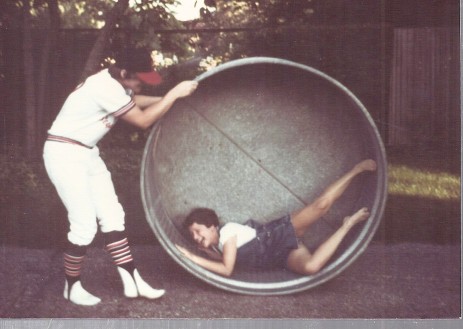 Little did I know at the time I would come to know water tanks well...

The above picture was taken getting ready for a Morgan-Graves Circle Party when we were in high school. The beer was iced and stationed in the water tanks on our joint lots.

Dennis ran with a more diverse crowd than I; swimmers, baseball players, and pretty hardcore party’ers, at least in mind. That is, they smoked marijuana, maybe even tried other stuff! Since we were childhood friends, I didn’t really think that much about the fact that we didn’t hang out in the same social (partying) circles. I was cheerleader with jocks, of course.

We worked together at the Prairie Village Pool and lived next door to each other, so I always felt like we really shared the same friends. So many of us that lived in Prairie Village and swam at the Village Pool had parents (mothers) who insisted that at 15 we would take Red Cross and Lifeguard Training at the Pool. This is so that we would be gainfully employed at sixteen in a 45 hr. 6 day-a-week job that paid rather well (minimum wage adds up when it’s a real work week). Mostly for mothers, we were out-of-the-house.

Dennis and I really shared our friends in a sense. That is, his buddies were always and still very nice to me just as my girlfriends express fond memories of sweet, kind, interesting Dennis. One reason is because our driveway was really the hub for all kinds of Prairie Village people with these party’ing habits, even my jocky SME athlete buddies I was recently told. As usual, all going on around me and my head is in the real clouds.

Parental Control vs. Sense of Place

Back in the day, neither of our sets of parents seemed to care much about legal issues relative to our fun habits as dominates parental fears today. I’m sure philosophy for some was the same as it is for parents now. Knowing your kids were in a safe place was of primary importance; their mischief, a parent could hardly have time to monitor for the parent is usually busy with their own misbehaving. Anyway, I would pass these guys and their row of cars in our very long driveway to get to my garage. It was called “the circle” as the John Buck sculpture is on a round grass island around which the drive circulates.  “The Fort” was two lots to the east which was Peter Wilkin’s hub. Peter was the son of another neighborhood architect who attended Highlands but transferred to Pembroke-Hill. This is another story, but “the Fort” brought the private school laddies to the other side of the tracks (Mission Road).

I always felt like a totally square goofball in that d@mn cheerleading uniform and, of course, was and still am. 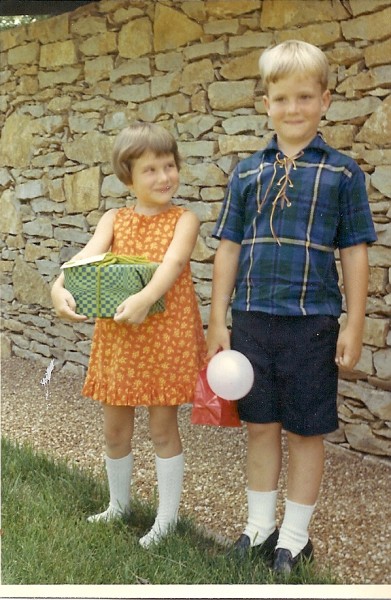 We were on the way to some birthday party.

I like my dress and mod gift paper, but Dennis is the star fashion icon here.

Such a cool blue plaid with the leather lacing.

And his loafers with the high tongues and white crews are classic.

Our parents had their friends from KC Arts-Social Scene (my parents friends, dad’s clients, Morgan Gallery Clients, Contemporary Arts Society people, Alabama Folks). We invited all of our friends, but I guess it was really open to anyone as people I would meet at KU from SM South would tell me “I was at a party at your house in high school.” There were lights, tamale vendors, the ice cream truck, peanuts, beer, and Riverrock Played on a stage in the gravel rockbed in the landscaping that linked our two houses.

This is excerpts from an email from DWG giving a bit of resumé-history of some of the people pictured clarifying some of my earlier notes I took from our last phone conversation re: people. Exhausts me to get it close to right, so I’m just going to put in his red notes from his email and mine are in black. This is the best Dean and Paula combo with which I can feel comfortable. Apologize to all, I am responsible.

Wm. T. Wiley, Bob Stark, World’s Greatest Artist
Sam Perkins Pres. of Bank in Olathe in photo just to the right of GG
Eileen and Byron Cohen: Panache (real estate), lived at 61st and Ward Parkway
Jan Pescanofsky and Giles Fowler CLARIFICATION : husband and wife; Giles wrote/reported for KCStar and Maybe Jan , too . Could probably google KCStar 1978July and find something. hmmmm…ignoring that last part Dean, already too many trees in forest…having inherited both parents genepools and talents, I’m not committed yet & would like to remain so. Anyone else? Please post.
Ted Coe…Director of Nelson Gallery, after Lawrence Sickman who amassed chinese collection. [CLARIFICATION : TED CAME FROM CLEVELAND MUSEUM OF ART and after Nelson Gallery moved to and lived rest of his life in Santa Fe Died plus or minus two yrs. ago .  Was very much an expert in Northwest American/Canadian Indian Art .] In picture on btm. row just to right of Laddie Hurst Mann. Ted came from back East, who had gallery directorships, into contemporary scene.

You know, Dennis will always be my best first friend and a boy. We have survived our lives and our wonderful families and mostly the way we are made: two emotional, sensitive, and very shy people.

Shy that wore itself in different clothes but is the same.

Love you Dennis. Tell Nancy hi, her Morgan boys Christmas cards always earn first prize in the card sort each year. I guess we’re all still working the arts gig in one way or another, squeaking out the dollar but doing what inspires us. We have to get the kids together in their lifetimes. Or, maybe they will just cross paths…I bet they will.

One comment on “Dennis Morgan and me, Paula: Myra & Ginny’s protegés. Plus partying and architecture, circa 1977.”