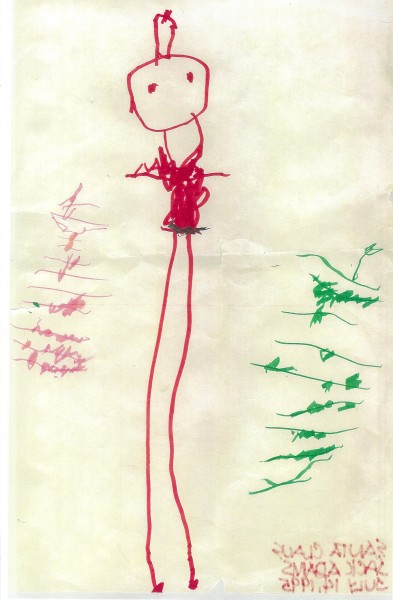 My mother Ginny Graves was the Art Lady from the Nelson Gallery. She was also the creator and director of all of the Art Programs in the Johnson County Library System.

I got to help her with these things, making stuff, being with other kids, on tv, setting up and cleaning up for classes, even teaching an art Class at Cedar Roe Library when I was 12 one summer.

But, most of all I am most thankful because I got to MAKE STUFF. And it was all organized ahead because she got all the supplies and paints and yarn and whatever for whatever general area of project that was proposed. In my mom’s case unlike grade school art, this was very loosely defined so that the creator could let their mind wander on just a few ideas thrown out.

Plus, my mother gets the best art out of EVERYONE.

Anyway, these are two things my mom will say. It don’t know if she is just magical, or if it is just someone who knows the value in taking the time and the interest to say it to a child or an adult, to ask this question.

“In creating, the only hard thing is to begin.”  -James Russell Lowell.

How flattering that someone feels enough about your ideas to help you start. That is what my mother was called upon to do at this time and throughout her life.

Then later, she will always say this.

“Tell me about your picture.” -Ginny Graves.

This makes it an even more special picture because both people can then learn about the thoughts and processes of using our eyes and what is inside of our heads to form an idea, a plan, that progressively gets down onto the paper.

“Creation is only the projection into form of that which already exists.” -Shrimad Bhagavatam

When someone cares enough to be interested and feels that they can learn something by hearing what you were thinking when you did it, how you formulated an idea and made it come forth, it is a confidence builder. Feeling your creative is empowerment.

Creative expression in whatever means, sales, business, relationships, doodles, cooking, style, and even working our sometimes wacked out minds-emotions for both positive or not-always-so-positive means involves time and energy. I feel that figuring out how and when and why we are always creating in life, whether conscious or not, and how to harness it is one of life’s challenges. Then, to focus it, to rein it in and put it into positive directions that are better for ourselves and others. That is ultimately, maybe, what we all are striving to do?

I don’t want to get into too many quotes from my yogi book that told me about all the chakras but creativity is your second one (they go from bottom up).

“wouldn’t you know?” in a nutshell.

(And then I do want to talk about Jack’s great drawing.)

I don’t know if he said this to mom and she told me or if I am just looking at this drawing to try to figure it out.  Probably the first as you know how it is with small kids, sometimes we don’t take the time and this is for what we have Grandmother’s. I like to draw, and did some art stuff with the kids, but I can be a real micro-manager which is counter-productive. I was a better manager-mother in general when I got busy having my own life.

I would think that the long legs are because Santa has to go down that long chimney.  We are a rather small family in stature, so that’s a pretty long jump from the top of our roof down into the living room at the XIT Headquarters. So, these long legs at least get Santa down through that circuitous shaft that runs from the top of the later second-story roof of the house, through the attic, and to about the ceiling of the living room. He can jump that last flight, that’s nothing with those legs.

I don’t know about all the editing on Santa’s head with just the eyes, the long, thick bare neck, or that shriner’s thing on top of Santa’s head and won’t conjecture.  He has Santa’s black belt.  But you can see, the legs to get down were the most important consideration.

I think the trees are wonderful.  Instead of thinking about the trunk, it seems like it is just getting the essence of the shape of the tree, very stylized. The tufts of green are both representing, to me, the tufts of needles on the trees but arranged almost like ornaments or lights so it is all in green. And the one tree is red.

Jack and Color. And conformity.

Jack, in another project, never seemed to be bothered that his wine bottle tissue paper reindeer body was red, not brown. When my mom asked him how he chose his color for the reindeer, Jack responded something to the effect of liking red, “of course, GG.” Rudolf did have a red nose, though.

This was also the case in Meade Grade School when the children would color in the line drawing of the Jack o’ Lantern which would then decorate the window of the Stockgrower’s State Bank. All of his classmates would color in perfect orange pumpkins with green stems, with the goal to “stay within the lines.” There would be 22, all lined up where they were displayed. I drove by one day to get money and saw that there was a purple one with some patchwork, color extending all over the paper and I knew that was my son’s. He did make the stem green, so it’s not as if he didn’t have some semblance of respect for context of fellow pumpkin artists.

So, mainly I was thinking about Christmas this year, about my parents, and had this drawing stuck away in a folder to share with everyone this season. So here’s the main point!