Well, I didn’t get a Christmas Card out this year. And I won’t be able to see those you have sent over the holidays. But I know they are all beautiful pictures sharing kind sentiments and interesting news from old friends and new to the Adams Family. Thank you! I’m sure they are in a big bowl in the living room with everyone watching over Dexter episodes.

My job was staging the picture, a thankless one that I now realize my mother has always had to bear. One year we had a professional photographer, Robert Love, Ivanhoe Love’s brother (the Liberal Mayor). I cannot find that card. We were all wearing white, very posed and a bit stiff with our hands placed upon each other. It was nice, but I thought we all looked pretty uptight.

I loved doing card design. As did Jack and Lacy. I was the coordinator, printer, and database.  Jack will remember the year we were both so challenged with the avery label print merge on my Dell that the final file was labeled Merry fre@k!ng Christmas labels (or some version of that). It was used for the next several years without computer corrections to the database because it was so hard to do.

Many years I would get help with stamps and labels, but as most mothers know, it is often easier to get them out yourself. The last Mexico card was ready the week of Thanksgiving and I still think it barely made it by New Year’s. Doesn’t matter, a couple of the years the Christmas Cards became Valentine’s Day cards. I always think it’s fine to skip a year if nothing inspirational comes to mind or if it might send one (me) over the precipice. You’ll notice we had very few the 8 years of getting Adams kids through high school in cities afar, working, and commuting to ranch. 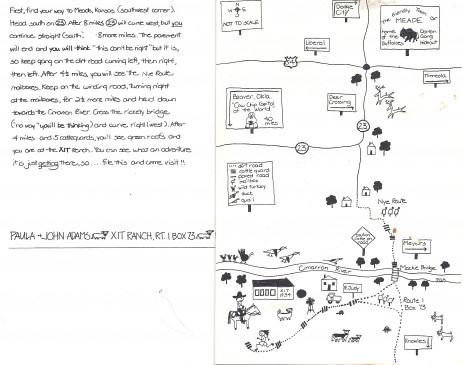 Map from Meade, Kansas to the East Ranch in Oklahoma on Cimarron River.

This was a map with landmarks along the dirt road that took people from 15 miles south of Meade to the ranch house on the East XIT Ranch in Knowles, Oklahoma.

I have to admit it that you are missing a card which was a classic that I am very embarrassed to have sent out. Fortunately I cannot find it in the scrapbooks. John and I are on a horse,  I have on a Laura Ashley dress with a white apron, and John is holding our male pug Winston. Winston, by the way, was later eaten by a coyote…”the dingo ate my baaaybeh”. This was a real eye-opener for me about (wo)man in nature and kill or be killed. 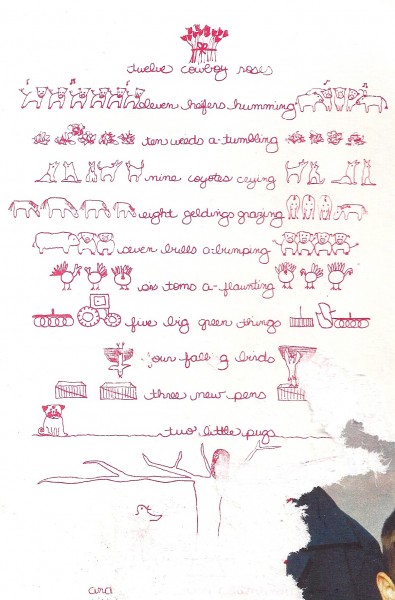 Christmas Card from 1987, the Christmas before Lacy was born. 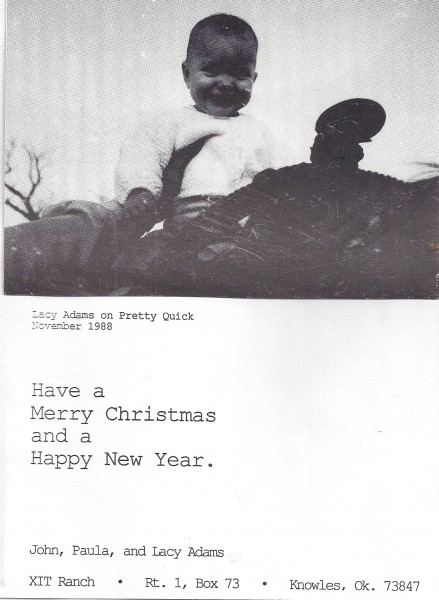 Christmas 1988. A Blessed Child is here. I knitted the sweater and you can tell she was born a happy horsewoman. 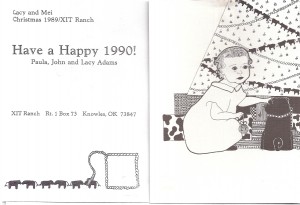 Lacy and Mei Rose. Lacy had pony print pants and I painted her in these, so I'll stick that picture in, too. It was kind of a theme that year and Christmas. 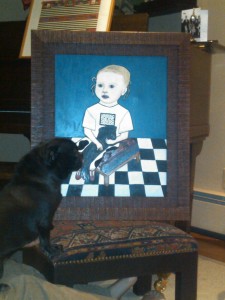 Well, here's the painting and the pug. 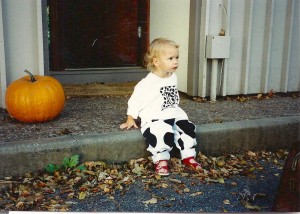 And here's Lacy in the pony print pants with her red high top sandals. 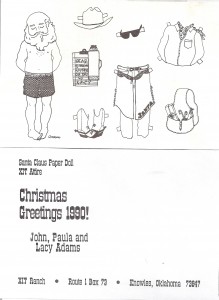 We had lots of paper dolls, so this was the Cowboy Santa Paper Doll Card with Lacy's Dear Santa list on his legal pad. 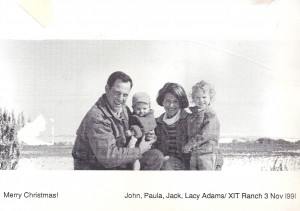 John, Jack, Paula, Lacy Adams. Jack Adams looks like he is smiling but it was FREEZING and he was really crying. I guess that is why dad is laughing. Boys will be boys. 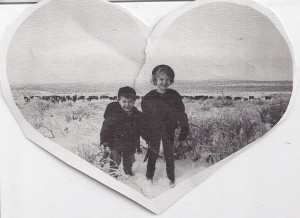 Now here Jack is really happy I think, but again, winter winds in SW Kansas are colder than a b!tch's wit.

Here is one of those late Valentiner’s. I think it’s actually pretty nice because people actually have time to look at the card as it’s not amidst 500 others.

Love this one, green red blue. I think this was taken Christmas Day because Lacy has her kitten Midnight. Lace cut a picture of a tabby out of a magazine and John scoured southwest Kansas until he saw that exact kitty. Midnight was born a barn cat and stayed a barn cat and mouser. She lived in a tree and one time caught a rabbit and drug it up into the tree, very tough cookie. 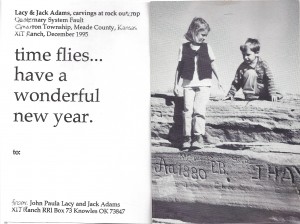 Lacy and Jack Adams by carvings at rock outcrop. 1995 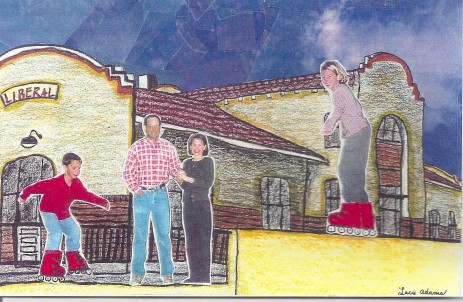 Lacy did this great perspective drawing with a light table of the Liberal Rock Island Depot. It was adjacent to the  Grier Eating House (like Harvey Houses but on Rock Island Line) that received ISTEA Grants from KDOT for Restoration-Renovation of the two buildings.

I worked in various areas: schematics, grants, historical significance, and did fundraising so it was a baby for me.  I am proud to have been associated with work of so many many others and there is a great Italian restaurant if you need a bite to eat when traveling on 54 west.  Jack and Lace spent some time there, but rollerblading not allowed on the quays of the tracks so the card is in defiance of city rules. 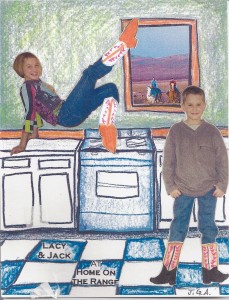 Oh, Home on the Range. Lace did this drawing and I added the boots. They are over at the guest (bunk) house in that kitchen. They are also pictured on the horses riding outside of the window. 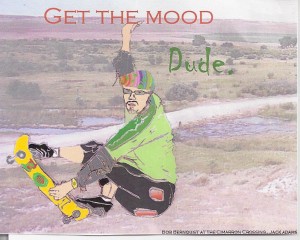 Bob Bernquist skateboarding picture that Jack drew. Then he put into Adobe Photoshop and colored in the fields. Bob is flying on the hilltop over the Cimarron River where I would run everyday on the West Ranch. Get the Mood, Dude! Brilliant, Jack.

This should be Christmas of 2000 or 01 and Jack would have been 9. His pictures were always total action.  The complex twisted body poses always convey the exact movement. He still has this ability to see how people use their bodies to a T and dances and moves like a cat.

He sees it in his brain because he seems to memorize so easily upon seeing and imprints that snapshot in his brain without having to see a picture. Same way with math. Don’t know where he gets it. I wish I had this abililty to see and master foreshortening. Look at Bob’s hand curved back in the air!

For the caption on the back, Jack wrote, "Lacy, what do you think Dad is going to say?"

This card was the Christmas after a summer we went to Chicago. We walked Michigan Avenue with Randy & Heather Knotts and their family taking pictures and lounging along the way around the Cows on Parade.

So this is Cows on Parade on the uplands along the Cimarron River. 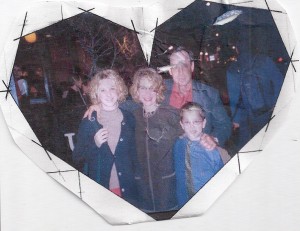 Lacy, Paula, John, Jack in New York City, Thanksgiving after 9-1-1. I think we are outside of one of Lidia's restaurants.

Here’s another that became delayed as I was at long last finishing my last tech. arch. studio in Lawrence while John and kids held down the fort at the ranch. Mostly what I remember is that the apartment at Meadowbrook had a pull-down bed and it had to be up most of the time for all the models and projects at my drafting table and it was very lonely for I missed my family, but worth it and necessary for later events to unfold for our family for high school. Believe it or not, the Adams family would come up to visit and we would all sleep in the room together.

I know we’re missing quite a few in here. But, these were the years when we got the Adams children a genufied citified high school edumacation. And it was grueling, and we survived, but personally only by the skin of my teeth. And maybe I’m going to have to be the one to say it to all of us, but… we got’er done! And well-done at that. Fait Accompli, the bulk of our work and work and driving and driving and driving and working and working was over. I’m sure all parents feel this way in some form or another, rural or urban. Of course, it was also the bulk of too much fun! 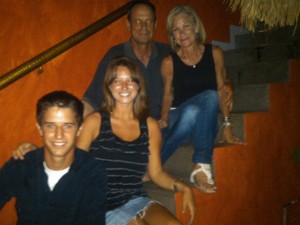 So, you may have seen this last card on Facebook the other day. This was a vacation we took in Puerta Vallarta the summer of 2010.  We really had only taken one beach trip like this in that decade to St. Croix the year that Lacy graduated from high school, so it was a real treat and it was a lovely trip. We waited until the last night, I ordered up jeans and black and it still hadn’t been taken after dinner and lots of wine. But what did God send but this beautiful orange stucco wall with tiered steps and I think it is really our best family Christmas Card.