The way to a girl’s…make them laugh, kindness, honesty and killer abs. 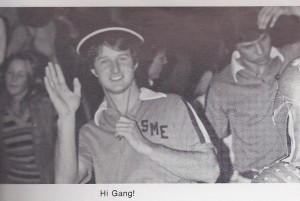 The best thing about heaven is that Mark is going to be there and he won’t have aged.  I still have dreams about Mark and I’m not sure what awakens me to remember ?? Maybe I shouldn’t say too much more about that, except that at the end I am always laughing.  The killer abs phrase is from Marthe whose specific memory is from grasping Mark’s torso from the rear of his motorcycle.  He was one of those real guys who drove a motorcycle for the real reason in the 70s which is that no father or family was going to supply him with a car. It was paid for with labor, in Mark’s case, construction for Chuck Stratford as well as measuring with Dave Wood for my father Dean Graves.

a cultural sidenote: Prior to this time, my mother, as did many women, existed by either doing without a car during the day or driving their husband’s car to work so that they could use the car that day for their grocery shopping, to take a child to the doctor, or for their wash and set. Remember that our mother’s mothers still had those embroidered tea towels that said “Monday, ironing, Tues. washing…etc.”.

This was actually pretty common and one of reasons social psychologists explain the sharp rise in divorce of women in the early and mid-70s. Women now had wheels. That is, with freedom of movement, came freedom to work. As men lost physical control over women, they lost control over the children and that is when our society just went straight to hell, at least as some may see it.

Plus, vacuum sweepers and all the appliances (supposedly) meant there was less housework for women (NOT) to goof around and go buy stuff. Or, in the case with the women in my family, to go do some work other than housework which used their education so they could make money to have a little fun using their own cash and pay someone else (provide another woman with a job) to do the work for which they now needed help.

so back to car cultural sidenote: I don’t really believe that the car was the downfall of men’s and women’s societal roles. Barbie may not have had or wanted a Dream House, but in my mind there was always a Barbie throughout history who had her wheels, even if it was in her mind.

…and back to volkswagen beetles: One time in the SME parking lot we put all their noses together for a kiss. Mark was kind of joint property, even among the best of women friends. And the laughing we all would share….a man among men and a stud among women, both liking him equally well.

And back to Mark. Mark’s mother, who raised two wonderful sons alone, had to have been an incredibly strong and independent woman. The only memory I have of Mark speaking of his father was a  memory about A.I.’ing cattle in Texas with him one summer as a young boy. A.I’ing is artificially inseminating. So, I now think this is interesting and curious, having lived on a ranch. 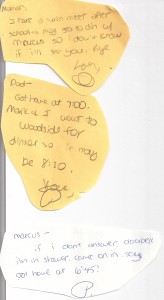 My life is recorded through notes to my mother and kept them all. If I wrote a note to my parents telling them where I was and with whom, and this guy was responsible and watched my back, I had very a long leash. Mark spent a lot of time hanging out at our house and staying for dinner, long after our brief period of dating. My family thoroughly enjoyed him.

Mark was hanging around at my house the night of the Kansas City Flood. While we were at the top of 67th St. (a relatively high point), a later addition to our house prior to a later drain caused a foot high lake of water in front of our home.  Mark helped my father release the floodgates by opening the garage and bucketing thousands of gallons of water from the front to the back of our house. A good man. 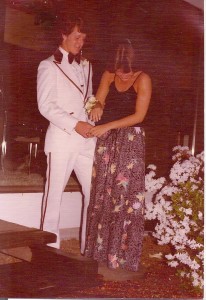 Prom '77: he's got the body stance, the tux, and I'm still quite pleased with my dress.

Here is a note from Mark: 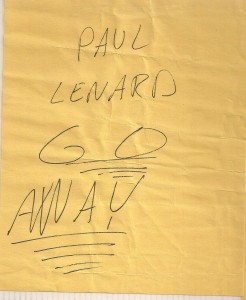 Contrary to what everyone always wrote in my yearbook, I was not that nice. This was a date that I accepted because this is what I thought my mother was telling me was the thing to do. That is, to say yes to the first invitation. I do not agree with this, by the way, and in this case, it is not nice to accept and then to complain dearly about having to fulfill the commitment behind the person’s back, in this case the date with Paul Leonard. I always had a fear of boys liking me for which I had no really jazzy feeling in return if you get what I mean. My daughter explains how to handle this by advising, “even the nice nerdy ones still think there is always a chance. So to be both kind but to not shun an overture of friendship, “you just need to keep clarifying from the very beginning that if you hang out with them nothing is NEVER going to happen.” In this case in hindsight, I realize it wasn’t even an issue. In fact, this is the male company with whom today I am very, if not most comfortable.

Anyway, Mark came over to help me prepare for the dreaded date, and when I went to the door to greet Paul, I found that Mark had stuck this on the front door. As I left, Mark yelled from my parents bedroom (he spent lots of time here with various people when we had parties before tee pee’ing SM South when my parents did their 3 week trip to the southwest every fall), “she doesn’t want to go with you!” and other hurtful things that I maybe had been saying but I really think not that bad but just maybe something like, “I REALLY am dreading going” but regardless now I don’t like to admit to having said or thought mean things or laughed at the much meaner things that Mark (boys in general) said.

I am so sorry Paul Le(o)nard. It was really a very nice date and we went to Pumperniks in Ranch Mart. And I had matzoh ball soup for the first time. I think Paul was Jewish, so that also commemorates this nice date in my mind. 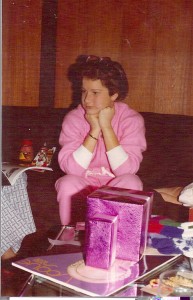 I’m putting in this photo to document that the fleece sleeper Mark wore at the pep club assembly our Sr. Year was mine and link myself with this fame.  All of the (football players..??? or was it the basketball yell leaders?) dressed up as cheerleaders and pep club girls. And then Mark arrived in the pink bunny sleeper. Hanging out at the Graves, he’d seen this quite a bit, but I can’t quite remember any preliminary try-on or how he snuck it out of my house.  It was quite formfitting on him. Translation: Mark’s @$$ looked great in it, all hard but soft and fuzzy, too.

Mark saw it all with me, was like a brother I never had. The white zit medicine I’d forget I had all over my face when he’d drop by but he’d never mention until I’d been chatting for an hour. Understanding my habit of taping over blemishes so I’d keep my hands off (by this time I wasn’t bothered that he saw this) but then later letting me forget the tape was on my face when I had to go answer the door. (He had no blemishes but I did have a little picking obsession at the time.)

So that is it, or at least a few Marcus “Ottawa” Allen stories. Please post if you have more.

All the women will be lined up for a kiss, a funny, and those great abs. We have missed you!

3 comments on “The way to a girl’s…make them laugh, kindness, honesty and killer abs.”