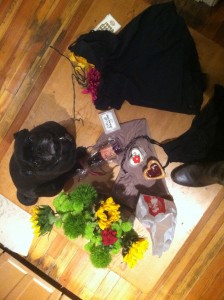 I moved recently to Kansas City and I feel as if I am living in Central Park East, upper 70s (?). Haven’t really a clue where as I don’t know NYC that well, but thinking since the Nelson is south and a little west and aligning this with the Met, I would say this is approximately my neighborhood. No point, but ADD has taken full hold working on financial, legal, unpacking, car title, health insurance, and numerous other things which I classify as WORK.

So, I had to take a break to do some of my other work today as it is Valentine’s Day and we all need to treat ourselves.

“Jay thinks vday is so stupid.”

Now, as a smart mother, I agreed and sent a long negative viral text rant about social pressures, consumption, media driven economy, men having pressure to show their roll with gift, women having pressure to tell their friends what their “man” got them since the girl with the best (translation to many is $$, don’t agree) gifts supposedly has “won” which takes all women back into the dark ages in so many ways I won’t go into it relative to women taking control over their lives. Here are a few of the excerpts:

“…i hate those stupid special menus where they jack up prices and serve stupid bad valentiny food. Go to a gay bar or google knuckleheads. I may have to do this, greAt idea paula [someone else introduced me so I can’t take credit for finding this.]”

“you have to rebel itherwise (i-phone again) ots a lose lose for all. I did always like Dad’s dove bites never turn down a choc or flower but sometimes this happens for no holiday whatsover.”

“Plus men who buy into it will really hate it if they were socially forced into it for 30 years.”

“That being said, if i ever get surprised with a car or a big diamond i wont throw it back in anyone’s face.”

Can you imagine having a mother like this from he!! who shares what reality of life might be like with this kind of cynical bad attitude 30 years from now? One good thing about mothers is that they can be a good role model or a frightening example, both work equally well.

Just ignore me, my first reaction is always negative, it’s kind of a boundary off-putting thing after which point I am totally open to whatever was said or suggested. I then have gotten this off my chest, have to make amends, and proceed to the PollyAnna Stuff. Any design perfectionistic people understand the critical nature. That’s what keeps buildings from falling down and artistic people working for nothing but their unrealistic desire to make others happy just like comedians want to make us laugh and musicians want to make us feel. We all have needs to be met.

Valentine’s Day. There was only one thing on the agenda.

Zum Store to have a tour with old family-personal-h.s.-KU friend Linda.

Tour was incredible. Soap room, other products room, met all the pups and peeps, beautiful creative design at every turn with ornate mirrors, corner booths with custom ottomans, an accounts receivable in metal orange casework to die for.

After: purchases for Lace and her BF.

Grapefruit Body Oil. Purchased this for myself the other day. Lace grew up on  pink grapefruit juice, so once again chose as preferable to the featured love oil scent for both genders and for positive memory association. We also had sectioned broiled pink grapefruit Christmas morning with powdered sugar. Very very nice.

But this just didn’t seem fitting for a man who wears beautiful golf shirts of the Scottsdale genre.

a note: Daisy the pug at Zum was wary of me and I was told she is normally so friendly. I was a little taken aback, maybe she smelled Rosie who does tend to be a bit aggressive at first and left some scent on me. I really was kind of hurt, dogs usually love me. I have pug paintings all over my website, have had 5 pugs in my life, wrote a little Prairie Pug Book. I will have to work on this, maybe I came off too strong. She may have also heard that I often photograph pugs, probably sensing that I might sneak a pic and use her to blatantly market the nothing I have to sell. Smart puggie, just like those (I still call them) Indians at the Taos Pueblo remind me,”It’s going to cost you.” I don’t think Daisy will want a gift certificate at the liquor store, though. I’ll have to think on this.

I wanted to take a picture of all the pretty displays and colors in front retail but it didn’t seem appropriate to ask after all of their kindness and time today.

OK, it’s 6:30, and I have to get on to my Valentine’s Celebration with a drink at Nara with Lace and BF before their dinner at Drunken Fish. Her gift also includes a Juicy Couture cute little baby doll nightset but don’t tell her.

After that, I have no plan, but certainly will celebrate love in the air. I am my special someone these days and want to bathe in everyone elses’s happy feelings, so I will go out SOMEWHERE, regardless.

(translation, may go see Freud-Jung movie for the third time, except I missed the 7:30, so home to try to figure out this pesky cable thing and remote. Urban living is so difficult).

It was a Perfect Valentine’s Day.