quips and quotes on the road and from the XIT.

The route from the ranch to Taos goes:

Taylor Springs consists of a bathroom, scones, a gift shop, a John Wayne picture above an antique commode and gas, among other things. Everyone from miles around gets their mail here and there are only about 16 boxes. I felt right at home when I saw they had a few provisions for the locals such as canned vegetables and a very huge frozen brisket. No milk, it might spoil for lack of customers.

We had this in the nearby town of Gate when I lived on the east ranch with mailing address in Forgan, in the Oklahoma Panhandle. Gate was big time, though. That is, relatively more populated. In Gate they would have chili or chicken and noodles in a crockpot so you have frito pie or whatever was on their menu if you stopped in over the noon hour and there was anything left.

Someone told me once, “those people in Gate only got running water a few years ago!” But, I think that was just people trying to think they are better than other people. 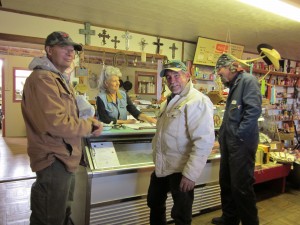 This is the Taylor Springs Quik Trip with the beautiful sexy owner and handsome gentleman local customers. Everyone is always so kind.

Leave it to me to find the most expensive thing in the gift shop. I photographed in the event that anyone is collecting vintage child’s cowboy boots. These are very nice. 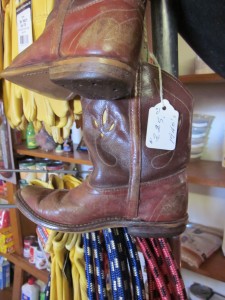 These are very early and have the inlay. I kept all of Jack and Lace's boots and they make a graduated fill of a triangular pediment area on the sloped front porch which was glassed in.

John Adams would always always say to me when we drove to Santa Fe,

” it could be a lot worse.” I would laugh, as I never really felt that way about living on the high plains, or anywhere for that matter.

We actually had a former cowboy, Mike Simmons, who later worked in northern new Mexico on a ranch. It was outside of Roy which is close to Wagon Mound, so named as the Mesa looks like, yes, a conestoga if u are driving I 25.  “Outside” being a relative term.  They were 65 miles from town and the kids were on the schoolbus for an hour and a half. 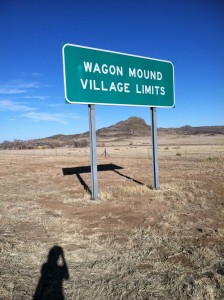 Since I'm from Prairie Village with the statue of Pioneer woman and family, I like the name of this town.

Mike Simmons, who was Polish, was most famous for an expression that has been passed down within the Adams Family. He was digging around for something (don’t ask me what for, probably a water line to a stock tank?) out in a pasture with Dave Holden. Dave was a “lifer” cowboy on the XIT, at least at that time, as Dave grew up with John Adams.  After they hit the line as always happens one knows who digs, Mike wondered if it was a gas line. So of course, threw a match down into the pit.

After it razed off his eyebrows and took his hairline a few inches back, Mike smiled and said, “That’s some kinda HOT!”

This can really apply to anything, though I tend to use it for foods. For example, 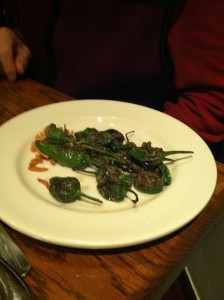 Just some beautiful peppers from a lovely dinner on my trip. These were not hot, but the conversation was very warm and nice.

Now, I do take issue with this next remark as it might seem to imply to some that Cowboys are not smart and this is not true of those I have encountered. Smart is, anyway, is as smart does says Forrest. But, as Raymond Adams told me once:

“We don’t hire accountants as cowboys.”  I just look at this statement as this. They can all count, but the Cattleman is always there for the final one, in the field and on and off the truck. And frankly, the cattleman really aren’t accountants nor can they explain the tax return much better than any average person.  Accountants are accountants.

This is another funny John Adams-ism and he is VERY as was his father, Raymond, and all of his brothers, Eddy, Clay, and Uncle Charlie.

People often commented about what a great life this would be…the fresh air, slower pace, and in general their idea of slow and leisurely pastoral lifestyle. Even more humorous, how lucky one was to have been fortunate enough to have been “given” this to work. Won’t even go there. Usually, it was somewhat based on the perception of  having  a horse farm in southern Johnson county and not by anyone owning a ranch who employed someone to live on it and manage. Though John usually would say very little, I know his thoughts and words to me were:

“do you think I’m living out here for my health?”

Ranching is the business. Cows are on the ranch that make the beef. The rancher and cowboys take care of the cows and the rancher takes care of the business no different than an owner takes care of his be it a store or a factory. Wide open spaces with no people or towns for miles and miles are where the cows are. Where it takes an hour to get milk or the kids to school. 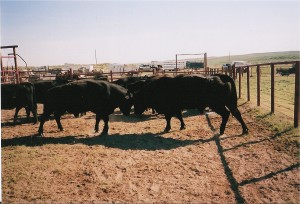 At least it is for those whose cows pay the bills and send the kids to college, for it does take work and active management to make a ranch make money. Ours was not a Party Ranch, though I did have some nice parties there. 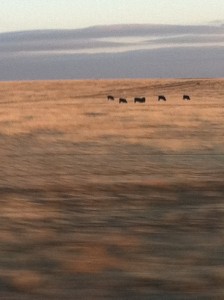 This fuzzy picture is exactly how it feels at nightfall.

And another tidbit, in the realm of “advice.” And this is from a city girl, so I’m just trying to help out if the situation ever arises socially. Don’t even think to ask how many acres or head of cattle one owns in a casual conversation. There will be a pause. And you will get a reply something like,

“enough to keep us busy.”

And I like to explain to people why this is not acceptable to mannerly, old school, rural people as John did not, being more polite than I, perhaps. It is similar to asking to see someone’s tax returns, number of shirts they have sold, or how many mailings they do per day.

It is funny interesting, as often there are people who ask who know exactly what they are asking and I can see the calculator tallying. I know because they ask me!!  But this goes on everywhere. Don’t let anyone fool you that holding onto a few assets for several generations (can anyone do division?) over time means everyone learned the same manners about talking about money. Being that I am not from one of those families (my mother scared me with “rags to riches, riches to rags” from birth!), it really isn’t relevent for me to be discussing anyway. 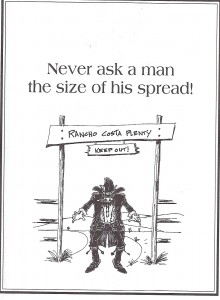 The ranches down here are different than where I lived in southwest, Kansas. They are very large and spread out with sometimes one employee tending to areas that seem to be a whole township to me. With the climate, sparse vegetation and years of drought the cows per unit is very very low. So ladies, if any handsome man tells you he has a ranch in New Mexico, you might want to check on the stats and definitely go for a visit before getting too serious.

I was actually already engaged after I saw the XIT where we were to live. I visited for the first time after I was engaged on a return trip from Santa Fe where I flew into Liberal. And, I cried a bit after this trip for no real reason I knew of except being an emotional person. It was and still is the most beautiful ranch I have ever seen and I was in love. And I guess that cowgirl expression that “if you are going to say no, it’s best to say so right away” just didn’t apply to me as I’m not really a cowgirl by birth. I seem to dive in, have trepidation, and think it is too late to turn back. It has always brought adventure. But, I am now learning other ways that are softer, where I can say maybe and someone will wait until I’m ready to go.

I really did not intend for this to be a story, I just wanted to post pictures from Springer. But I will only add one anecdote about the restroom stop at the intersection in Springer. In part, it is because I have some great pictures from this intersection with my daughter. The story is this: I lost $400 in cash that I had saved for my Santa fe trip in the restroom one time when I was traveling with my sister and left my coin bag.

[I do tend to stress around nuclear family with three eldest children and me the youngest as everyone is always needing something or someone to organize, ME.]

It really cramped my shopping, so at first I was so depressed and down on myself for a bit. But, I went home after having spent no money at all and having had a lovely time. This can be a GOOD FEELING AFTER A TRIP, I had this in France, too. And guess what?  A very kind lady called me a week later with my cashola. She tracked me down somehow by calling some numbers in my wallet, having picked it up and not wanting to leave it there!  God really rewarded me for my parsimonious-ness that day.

So Springer brings me thoughts of prosperity and good fortune, always!

Here are one lovely sentimental picture from Springer, New Mexico at the Cactus Club with my daughter Lacy, about Christmas 1989 when she was not even a year old. 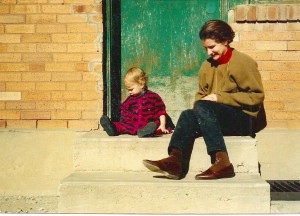 Lacy Amelia Adams and Paula Graves Adams on the door and steps beside the Cactus Club. Springer, New Mexico. 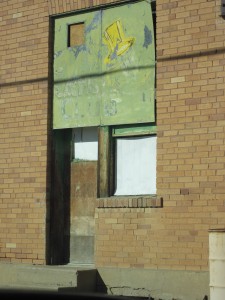 This is the Door by the Cactus Club where Lace and I saw below 13 years later.

So, I guess the other stories and pictures will have to be another day.

The End, but only of this story.