Baaa…when he speaks to me, He calls me Paula.

I am attaching a link for a wonderful sermon that I missed hearing last week on Mother’s Day at Second Pres.  It is very powerful and I enjoyed hearing this one in particular at home, as I am prone to crying in church. Click on Reverend Paul Rock: The Voice, the top sermon, delivered on May 13th.

Listen to him, but he is talking about how God speaks to us and how to find that voice.

The value of feeling really low and 12 steps to go up.

I first had to feel pretty low about other things and to realize that I had to give into the fact that I couldn’t run the show of my life. I will say a little because I believe the 12 step process that one particular anonymous group identified in 1939 as instrumental for so many should be at least peripherally mentioned. It worked for many people to give up alcohol and more importantly to take responsibility for whatever else about oneself that wasn’t working in life. And addictions can be many things in people besides chemicals. I know because I am an addictive person and you can see it in part when I write. It’s often those things that worked so well for so long to keep us going, working, doing, running, thinking but for some reason yet to be uncovered it just wasn’t working anymore.

Starting over Each Day.

And, it has been said in meetings that it is a bit of a bait and switch. This is because so many do have a problem with organized religion and a higher power, religion is separate and apart from this process. But at the end of the day, it finally does come around to finding a God within oneself. And, because it focuses on just each day, it is really what brought me back to understanding why people chose Christianity as a religion. That idea that each day, sins are forgiven, and to be good, feel good. To move on doing good things it is important to forgive oneself to be rid of resentments that can keep us stuck, lazy and in the past in a negative way. Focusing too much on not forgiving oneself diverts from taking responsibility for past actions with amends as well as doing important work in life in the future.

So, after all of that and really several months of just going through the motions, I came to Believe. After practicing and saying and repeating, something finally happened. It was not like this, though this picture kept going through my head. 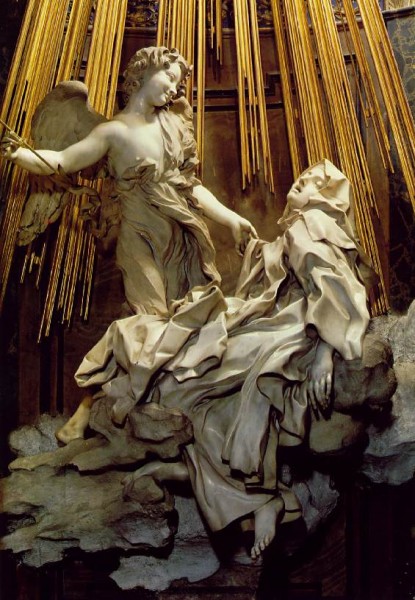 It did involve sunlight, though. I think this is in part because the sun is so warming and relaxing. It also so changes the way that everything looks at different times of the day. Everything is grayed and light blued in the morning, golden in the afternoon, and reveals every color possible throughout the day, all in the same still-life setup.

Not all of the time, just when I am conscious.

But in these moments, all of a sudden the

the green was a meadow,

the blue was indigo and

my reds were tame and quiet.

I have studied art and been around beautiful paintings, sculpture, buildings all of my life. I’ve visited complex cities that were both planned and evolved with people, time and place. Some were places that others may not have thought of as beautiful like junkyards, but I’ve always been open to thinking there was something to see and learn in any place, any person. I never associated this with God. 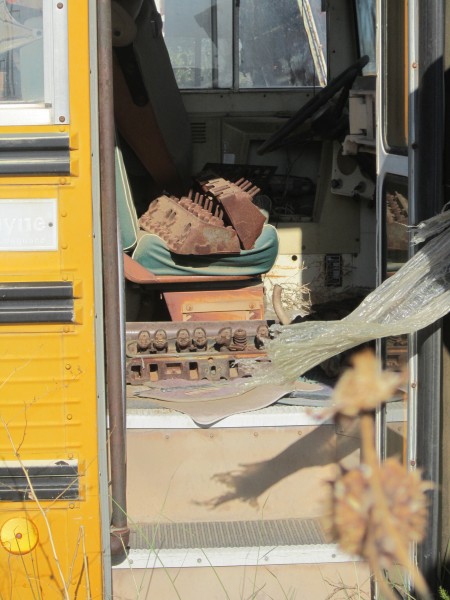 Even when I made things, my meditation, I never really thought of this as God.

And later when I so relied on my mind to remember, there and in my dreams, I have always seen vivid color and detail. It does not always matter if something is in front of me, I can still see it, taste it, smell and touch it in my head.

When I lived in southwest Kansas,

I lived in the past when I studied stone buildings and read Webb’s the Great Plains.

I was in the future when I studied Rem Koolhaus and read Metropolis.

I was with my friends when I was lonely,

and I was in Paris when wanted to explore, see, draw and be alone to experience.

And I was in the present,

when I was cooking, driving, raising a family, doing my work,

but being connected to all of that and feeling important about what I chose to do.

Paul Rock also speaks to that in his sermon. That is, pretending. Some people call it daydreaming, but when it shows up in what we do on earth it is more than that. This is the idea hat there are crowds cheering, people watching, and that what we do matters, civic responsibility and hard work. And for all that organized religion gets knocked around, that the belief in good through religion is something that at one time and still does unite Americans in values and in large part helped us to build a great country. If one doesn’t like the word religion, just call if faith, faith in building something that is good or in large part tries to be.

With faith, suddenly Life is electrified through everything on earth and it is all connected.

The Work of it, the Practice, to hear Voice.

Within Paul Rock’s sermon he also talks about Voice, real voice and hearing. I actually have practiced this, not often enough, when I really work at setting aside a time and place to have a conversation. The pauses, the questions.

I’m not so great at conversation with others in general. I talk way way too much about self, answer questions with too much detail, explain, random and tangential and wonder why I’m always the one talking and having to offer, often way more than I really want or need to say. It comes off as unhealthy narcissism when I am often just engaging in a nervous habit that in part was necessary to share about my unorthodox life but no longer has value.

I am working at the Art of Listen, being still. (though professionally here this translates to just baby steps with partial “edit”).

And of staying in the moment.

Maybe actually trying non-verbal connecting, even with other women and we are so verbal!

I have to say, the last place I found was just happening to sit upon a little padded bench in my foyer at The Illinois in one of these conversations I knew had to happen at that moment. When I looked down, terrazzo and border tile and when I looked up,  there was a beautiful plaster ceiling of white. 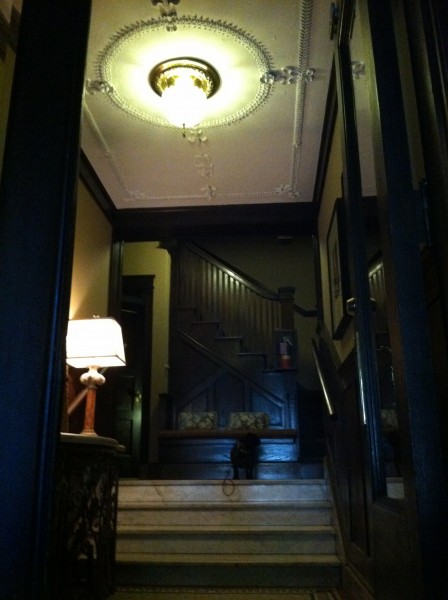 My little Borromini Chapel at The Illinois. How on earth did God help us do decorative plaster?

So, at the end of the day, it is work and practice and I could be doing a whole lot more, though out each day. But, I am getting pretty good at it. In fact, the birds awakened me this morning earlier than usual to get this sermon of Paul’s out there before church this morning.

So, both the seeing and the hearing are working pretty well.

Off to shower. I think instead of running this morning,

I will have to let God treat me to a some tasting before church with a chocolate mocha decaf.

And I’ll get to church early,

to take time to smell the lilacs by the fence

of the house along Oak where I park.

Have a happy Sunday.

One comment on “Baaa…when he speaks to me, He calls me Paula.”