Wagon-Streetcar-Circulator: a Public who Works in Progress. 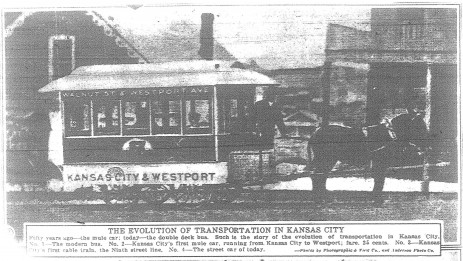 Getting Around Walnut & Westport Ave. by horse.

I attended a meeting last week about the newly proposed beginning of a mass transit system in KC, the Urban Circulator. The issue is complicated, technical and political. The City, planners, a KCMO Councilman, architects and consultants were there in force to answer questions after the brief  presentation. It was tight, beginning a quick definition of light rail and commuter trains versus urban circulators. And, a mapping of the transit district to be taxed which is handled with a write-in ballot for which the request is to be submitted by today at 5 pm. And the most effective, questions were not opened up on the floor. Those in attendance were encouraged to speak directly with all of the numerous people above capable of addressing the nuances and complicated nature of even the simplest question. Here are the points that I gleaned, in part from eavesdropping on the Councilman’s conversation with another.

a) it’s a start. A plan is never perfect, and many good ones fail at the ballot box. Try again.

b) if they get the TDD now in this first phase, it will be easier to get federal funding for the next phase.

c) Yes, there are many other arteries besides main which were considered and also had great merit. But it’s an economic development question right now. Baby steps.

Most importantly, the meeting did not waste anyone’s time. Officials were all readily accessible to the public, listened, and explained in civil, respectful terms the issues at hand to get to this point. That is, anyone who wanted to hear themselves talk or “stir it all up” or get too tedious for a roomful of people needed to speak directly to the expert whose answer would specifically address their point be it a politician or an engineer. Person-to-person dialogue. As my Wichita therapist suggested at times to say to others (sometimes annoying) questions, (big sigh first)….”it’s so complicated.” In this case, those who knew how complicated it was were there to mostly listen, but then to address the question at hand and to get just as in-depth with each person as was required (when their eyes start to glaze over…). Or, a tight answer about people and politics in a closed session, choosing the right words. It took a lot of work to get here and try again. I respect it. Kudos KCMO for planning and presentations at these sessions last week.

HOW I GET EXCITED! HISTORY! If we do not know our past, we are destined to repeat it!

I celebrated by going to the Missouri Valley Reading Room to look at transportation in Kansas City to see what was going on a hundred years ago right in this part of town. The people, the publications, the pictures.  This is the first of a series of posts about the electric streetcar in the growth of the Kansas City in the culturally rich areas which we are now appreciating after thirty years of architects and people with vision saying, “they will come.”

The picture above of the horse drawn car coincidentally is just a block from my house at 39th and Walnut. And I’m confident, the urban circulator will be heading past this address shortly, phase II or III. It will be here before we know it. Think Positive.

It is prophetic to see how much the Urban Circulator looks like the electric streetcar. A neighbor of mine in Hyde Park from a demographic of the city that never deserted this area commented, “they just should have left the old tracks.” Everyone’s got an opinion! And Henry Brown and Emmett do have some valid points. That is to say, not everyone is Johnson County-Brookside educated privileged folk are as excited about urban renewal. Schools, housing, jobs, and figuring out a way to give a little piece of the pie back to some of the good people who preserved this part of town by hanging in there and awareness of displacement.

Now that’s big one to take on with people and politics in KCMO. But at least it’s one to keep on the back burner when we all hop the state line to bring cultural richness into suburban lifestyles and a viable choice for leisure time from our shopping palaces to consumption where we could be in any city in America for their sameness (Hands raised, I’m guilty of all of the above!). Another point Henry and Emmett made was that they ultimately wanted lateral suburban systems going, not south and west, but East to visit where their folks had gone to escape the City.

I hate the expression “it’s all about the money” and I know this is true, short-term and long. But, I do believe that in the longterm with this originating in the State of Missouri that it will someday truly be a whole Greater Kansas City wide project. Everyone pays some taxes, KC-Johnson County, together as a City and People who can all share in the greater good both in life and in business.

So here’s the electric streetcar of a century ago in Kansas City. Hello neighbor, hop on!

My father, Dean Graves, lived in Kansas City, Kansas. His family did not have a car when he was a young boy, his dad worked in a lumberyard and his Mom worked for Biggar Insurance in downtown KC, Kansas. He was the first to go to college in his family. I don’t think they maybe even had a car until he was in high school or college. He would take the streetcar from Kansas City, Kansas down to Main to go to the picture show that was fifty cents where there was air conditioning. I think he said he would also go to Windstead’s and get a frosty. I wonder if this ever included the girls or was just a guys thing? What a great date night that would have been!

So, the Urban Circulator is something to do now that will create something better for those younger than I. This is my Positive Opinion.

It’s a Public who Works in Progress!

The photos above are from the collection of the Missouri Valley Reading Room Archives and the Kansas City Public Library, Central Branch. They were requested for duplication for educational use.