All we want for Christmas…to feel Love and Gratitude. 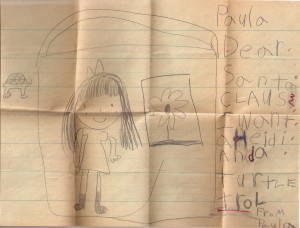 For Christmas this year I pretty much decided that I needed to be sure that I had a great day. I can’t really ever remembering particularly wanting the Heidi Doll. And that turtle Troll was probably something absolutely impossible to satisfy that my cre[aaazy, man!]ative mind had made up.

In this same way, no one really wanted to eat all those cookies or peanut butter balls, there was no family gathering at my house I needed to orchestrate, and I was around no one in particular who had any Christmas needs. Even my neighbor whose father had died was super super busy organizing stuff and planning a trip to Mexico, so we waved today while running to respective outings armed with food as I did have a two events with minor cooking responsibilities. So, I realized it should be a celebration and opportunity to have these few days to keep it simple and focus on what Christmas meant to me.

And I’ll tell you, it is a LOT less work. It makes me finally realize that term my father so often used about “make work”, though in different contexts than women. And, I do think is often what we (women) to do ourselves, at least if my yoga teachers had anything to share about their family Thanksgivings… I think we need to start competing on who can do less :). Much of what we do likely misses the point if we are expecting anything in return and when I started to simplify, I realized it wasn’t really missed much, if any. Green wreaths with cherries were pretty enough in my picture. Now, the prime rib …that’s something entirely different….

So, I started early to plan how I would spend this weekend, tomorrow and Tues, being free of any (moi??!!) past resentments, pre-conceptions, and time & money consuming last minute tasks. These had been likely only an attempt to try to control the happiness of others on Christmas Day while often neglecting my own needs. With all of this thought, I realized that the only thing that mattered with those primary relationships in life with whom I’d spent so much time  was one special gift.

Jack said it perfectly in this note which came with this golden gift. The gift is very beautiful, well-crafted and made with loving hands so here is a picture of that first. 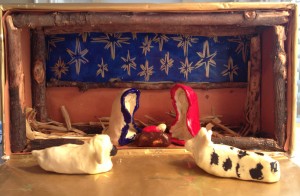 I love the way Jack forms clay, I’ll have to do another of his KU Basketball player.

But, it didn’t really even matter if he had given a gift or not, because his words just by themselves remind me of what this holiday is all about, Christ’s birthday. That is, Christmas is about the gift of Love. And, the idea aka the Faith in Christianity, is that the parent, God, had a son that was an embodiment of his love. And, Mary was the one who had the privilege of being his mother for the short time he was on this earth. Here is his note: 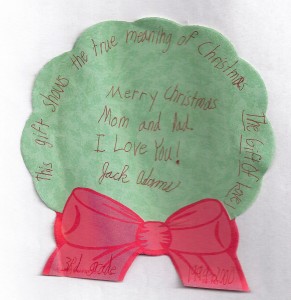 “This Gift Shows the true meaning of Christmas. The Gift of Love! Merry Christmas Mom and Dad. I love you!” Jack Adams, 3rd grade 1999-2000.

This  wonderful person who gave, spoke, spread his gifts given to him by God his Creator was Jesus. You know? A really good kid. Took what he was given in terms of his abilities, and saw the positive. He spread it in the way that he was able, to others, learning to somehow speak in such a way that his message from God spoke to very many people. In the real world that we live in, you can imagine how he  was somewhat of a threat to power structures. So he was killed.

That is, a person’s faith that God’s love is really what matters the most in getting through life and each day, was an idea that some in power felt needed to be put down. This is because fear is a very powerful force in governing others.  While it was an entirely different time, in some ways it’s just the same.  Fears, within ourselves in the fairly comfortable middle class reality of being fed and clothed, fears that society can evoke, fear we may let others evoke with theirs that ignites something also within us, and mostly within ourselves if we let it grip us. Fear of poverty, fear of indecision, fear of being alone, fear of self, fear of loss of self-control, fear of not being able to control. Whatever it is that pits one against another, and most often those two arewithin ourselves. Divide and conquer, right?

So God had a plan. If we can forgive ourselves for being human, we can always begin again by feeling love and gratitude.

God’s intentions came to us by way of a story told to a woman that saw Jesus after his image reappeared, but his body had disappeared. His spirit was still alive and he came back to tell what had happened.

I believe this happens to all of us in many ways with people that have come into our lives that are important. They come back in our dreams and in our thoughts. And if anyone else’s experiences are like mine, they are always positive. All gratitude.

Perhaps it’s easier to remember than it was to ever experience in real life. But, I do think at least focusing on the feeling of thanks makes everything about both giving and accepting love easier. It’s only then that I can see what I brought to that relationship and equally how well I treated and thought of myself within that relationship. It’s a mixed bag of responsibility, self-forgiveness, love and gratitude.

It’s only then that I can bring that to another on the holidays as there were so many things that I enjoyed. But this time doing it with more love, more understanding, more forgiveness both of self and of another for not fulfilling any “want” or “need” that I have or had neglected to give first to myself.

Got it, Paula? That is, first remember that I am a Child of God as Paul Rock’s pebble reminded me a few Sundays ago. Then, to feel thanks.

And to know that so often when I am alone, that I have the very best companion.

It’s a time to enter the quiet

that often can get lost

with all the hubbub,

it should be cherished.

One comment on “All we want for Christmas…to feel Love and Gratitude.”