Rosie and My Shadow….

I am now permanently settled in Hyde Park in Kansas City. It is very urban in my new neighborhood, at least as far as that definition goes west of the Mississippi. And of course, it’s all relative as I’ve been living for 28 years on a place where my next closest landowner was 8 miles away and a trek to another cowboy house was a city block.

And, I have been pondering as to whether or not I think Rosie has adjusted to urban living.

I have identified some defects of character that she perhaps needs to work on.  It’s not that these haven’t improved since Rosie and I moved to Wichita in February 11, at least she knows herself better.  But they still, and will likely always need, daily work. 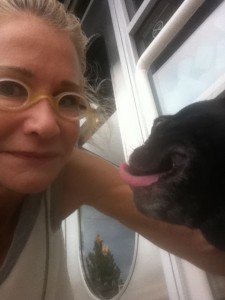 In fact, here’s a picture from Rosie at Starbucks at Central and Rock (Wichita) after she finally got the attention she wanted and was holding court. 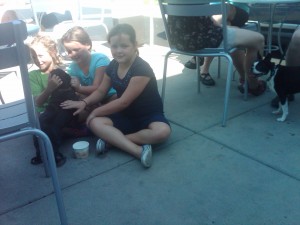 Rosie and ladies at Starbucks in Wichita with little boy dog neglected at right.

I even felt kind of sorry for the little boy dog beside the table. Once she’d found her ladies, he was ignored not only by Rosie, but by all the other missies who might have otherwise found him quite adorable.

a) One was in Santa Fe at Vargas Mall where I waswith a friend who was mailing some stuff to Ebay. These canines were big black labs. The owner, a calm organic transplant to New Mexico, was not happy all and shrank back in terror. The barking so reverberated in the mall that my friend around the corner at the UPS store came out to see about the ruckus.

I’m sure they were likely way more evolved than she, living in the Land of Enchantment and everything. And…she does have a bit of a Napoleon Complex.

b) This 2nd catfight was with the somewhat-but-not-enough-non-speaking younger 3rd European wife of my neighbor in Wichita. She doesn’t speak English, but actually quite mirror’d her one dog in behavior in both lack of respose and reaction as Rosie did her usual (friendly?) barking. Frankly, her husband told me later that his one dog was very aggressive and the other a sweetheart. He said it happens all the time, and that Rosie probably got the hostile scent, scent’sing two against one (the owner and fiesty dog).

So, while I do think we all must work on our issues, I have also thought about the encounters when Rosie has been put on the defensive, as she was in the first episodes. I feel like in dogville, it should be like that 70s book…that is, “Me and my Dog are OK, You and Your Dog are OK.”  Not all animals were raised with grassy, green sprinklered lawns to protect and received pet shrink care and acupuncture.

Rosie did say she would work on her end but advises me to remember, “What you think of me and my dog is none of my business.” That is, it is only a reflection of her, NOT ME, so who cares? Is this really true?

And another tidbit of wisdom from her. In a kind way she suggested that when I am overly worrying about her, that

She is a wise one.