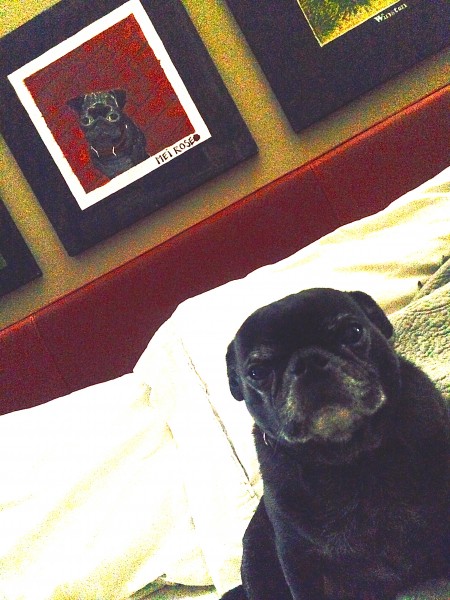 “Hurry it up, I’m not getting any younger…”

Rosie’s really has a fire underneath me these days.  She’s not the only one either…

My routine is basically that I go to gather with like-minded folks in the morning, sometimes yoga, sometimes coffee & crosswords, sometimes a ‘house’ of sorts. The hope is that we’ll all head off into our workdays with no cross words, connecting a bit to forge on.

For me this has been things like moving 4x in 3 yrs., a bit of time in court and meeting rooms doing some bidness, applying for about 35 jobs, burning the social hours at non-profit events to both network in a new town and beat the bushes to find ‘a job’ with my multi-disciplinary degree’d-work past on Plains, lots of “accounting”, the Callan Table & John Bogle, careful people choices, learning by experience that No and Why and treating others as they treat you are pretty powerful, and even when I don’t like to do it I try to be civil about it.

But somehow, she’s just not understanding that amidst searching … researching the PhD with classes in Lawrence, grasping ‘Bridge’ & ‘Brush tip’ at JUCO CS6, in composing the letter and mindset of the job apps that will not get interviews, the networking with people and relationships and details and annoyance with advice from random places of irrelevance and my condo latency diagnosis with Time Warner and finding a way to serve others needs to avoid figuring out how to serve my own and if it’s not one thing it’s your brother or mother…..

I mean, doing and trying lots of things

Can be so distracting AND IT TAKES SO MUCH TIME!!!

And, she just sits there like the Queen, staring at me from her throne, now even more since my friend Paul began to refer to her as The Rose.

The other day she somewhat confronted me, sitting right there in the middle of my Red Leather Bed beneath my black pug painting and queried me who gives her egg yolks.  She was making statements of hierarchy and higher purpose about which I have bristled a bit.

I just have to vent so I’ll tell you how it went….

[legend: Rose in Red. Paula in Indigo. As with most hearsay, you’re somewhat entering the conversation midstream…]

“Whattaya mean….?  if I’m NOT The Alpha Dog of this Place, then why am I 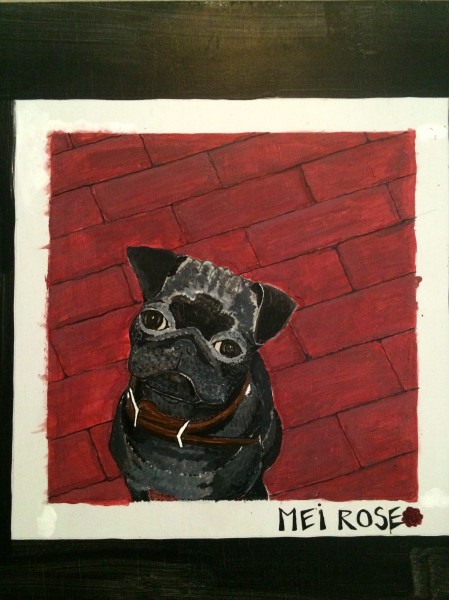 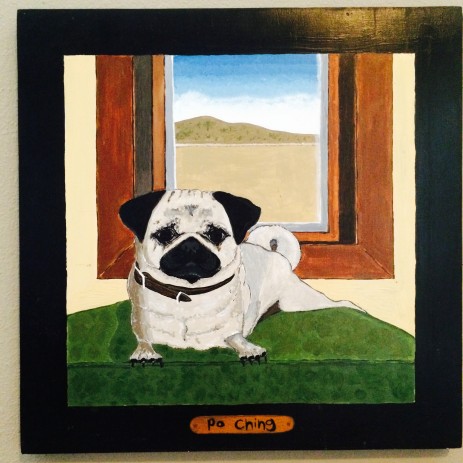 “you have a sick sense of humor, Rose!”

“That’s not YOU! …That’s Mei Rose. You weren’t even a glimmer then, and Mei was definitely not the Alpha Dog, poor thing. I got her when I was contemplating having Jack, never a good idea. She didn’t receive adequate attention. Po Ching didn’t help, as nice as she was about it….you know, that ‘smugness of 1st Pug-ness.'”

“And you better hope that’s NOT your portrait. There’s a reason that front porch was the Dead Dog Portrait Gallery, Rose.

It can be a real Bitch for a Bitch out there on a Ranch, it’s hard…

Not every Dog’s jes’ ‘sittin’ in a condo in suburbia eatin’ chocolate‘ as we are doin’ now.”

“Don’t tell me that Mei Rose story again, it’s completely irrelevant. The UPS Truck in JOCO has no need for speed. That company’s not losing any bucks with this demographic.”

“And, I won’t chase that driver down the hall again, but I hardly think he’s going to run me down in his brown boots and tight little shorts.

“Do tell me that part again, though. Did he ever figure it out? What’d he say ‘what ever happened to that little black dog of yours?'”

“Nope. What was I going to say, ‘ flattened’?  I didn’t have the heart to tell him. At least she was remembered.”

“And besides, it’s not about who’s in the limelight, or who’s the most successful, who’s favored or the golden child or heir apparent….”

“It’s about doing things when it’s the right time. Historical continuity is just about a story that keeps unfolding, and we’re all a part of  this story, we need to respect each others feelings, be safe to express ourselves to then be able to have moments of expression that are our gift from God…it’s a path that each person has to make for themselves and before we do this we have to stumble over and over and get up and then let go of our ego to give in that we can’t control everything, often not ourselves when we wander off topic…, and then to assess what works and doesn’t and then not let these defects keep us from…” ‘need I go on? I’m getting tired, you usually interrupt me by now…’

“I was practicing patience.”

“Rose, they aren’t asking you that because of the white, it’s because you’re such a small pug. And since you’ve been eating all the tuna and sardines, you really are cut for a female, a pretty slim pug. I think they think you are a puppy….”

“Don’t fool yourself and don’t project...do you ever believe it when people say stuff like this to you?”

“Just quit talking and get to work, clock is tickin’ and you’re not going to live forever. I mean what else do you have to do, and what do you really think, that you’re going to get a job???? That’s what the ex-Sprint-exec UMKC Kauffman man said to you yesterday and he said he’d been there…..re-think!! This is an opportunity! Quit being lazy and afraid!!!”

“What do you think architecture school and that Academic Thesis Torture and interior design in Paris with all those scary Frenchmen and all this artsy stuff was all about!!!????  It’s not that great! You’re not Frank Wright or Michelangelo or any kind of Power Ranger at all!!! Don’t worry about it being any good or perfect or people saying, ‘I don’t know why I just hate it and it’s bad and you’re a dumb flake and you’re annoying and live alone and I don’t like you either?’ Who really gives a $h!t, just keep on doing it like you always have and it pretty much always gets better! Work your program!”

“Well, the technology part of it in Adobe is really hard and just that, major focus and skills in many programs. And while I like this when I get into it it’s both so dry and so frustrating and time intensive that I sometimes spend all day learning a lot but have no visual record of this reward….“

“Well that’s why they sometimes call work work. And whattted your web designer just tell you??!! ‘Get out the scissors!!!’ The hard part is the marketing, selling it, that’s what you’re afraid of, you’ve been trying to stick yourself in places where no one could see you or work your whole life, to use that as an excuse, and now trying to figure out what you have to sell…just do it!? Things fail, over and over, that’s life, your whole life is just a series of failures, that’s the fun, that’s the adventure, always has been….

….you get right back on the horse and stay on the trail and wait for the next fork and take it! It’s all a game, but you gotta keep rollin’ the dice! Just DO IT??!!!”

MEEE!!!!! I’m your product!!!  Cher’s right here in front of you, in her prime, and you’re trying to make a Master’s Thesis out of what made Cher Cher.

Get with the Program!

“And besides, this is a relationship. Would I not be exploiting you in this brief time that we are really together on this earth? …it seems so capitalistic and shrewd…”

“Look we all use each other, or what do you call it in your mid 50s zone…’reciprocities’…

‘Just do it and make this bed first. There’s Dog Hair all over my pillows.”

your sponsor needs to be the same gender.

But they never warned us

about the dangers of at times sleeping together

in a Red Leather Bed.

(But I’m NOT vacuuming up her damn hair first.)