Cowboys of Delano: past and present

I was running in Wichita Saturday morning in downtown Delano, a small historic area just west of dowtown Wichita. Delano has a wonderful clocktower, thriving businesses and is just across the river west of the downtown, a mile or so north of US hwy 54 (Kellogg) the east-west artery running directly through the city. 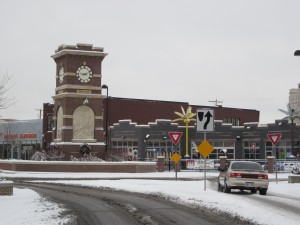 A Rotary in Kansas!

In 1870, Delano became an important cattle-shipping center on the Chisholm Trail. With promises of $50 in eastern markets,  cattleman drove cattle through Jesse Chisholm’s “cattle highway”, in this particular area, herding cattle across what is now the Douglas Street Bridge and south to pens on Kellogg. I’m partial to it because the cattle shipping industry became a crucial part of the formation of Delano as a recreational district for cowboys.

Delano was the rough side of town as vices were kept out of the Wichita area.  Most of the gambling, drinking and prostitution took place in the township of Delano, which did not have any law enforcement. Guns were checked at the bridge before you could cross into Wichita. People would shoot their guns and there were gunfights. I  also heard later that it cost $5 to cross the bridge into Wichita which would have been quite the cover fee to hang out with the civilized folk when it was probably more fun west of the river. It’s still a fun place.

I run from my daughter’s apartment at Friends University (see Friends University, New Year’s Eve 2010) north and east at 7:30 am when I’m in the city, so I was afoot when I met the first cowboy from Delano, a man without a mortgage.

First a word about bikers.

Wichita has more than it’s share of bikeriders downtown.  All of the missions and kitchens are located in this area and for those living and surviving in the downtown area, it is the perfect size city for bike mode. When  I worked downtown, I was so motivated and impressed by people I saw braving the vehicles that my kids and I rode our bikes from the ne suburban side of town 10 miles through the various historic neighborhoods, under the interstate, arriving downtown with our Old town destination.

I notice bikeriders.  Not the guys on the weekends in bikeshorts who bike for exercise and sport.  While I did use the bikepaths near our apartment to get to the retail area on the weekends, it seems like we are building bikepaths in all the wrong parts of town.  So, when I saw this man riding in the sub-freezing weather with his house on his wheels, I had to stop him to ask about his gear. 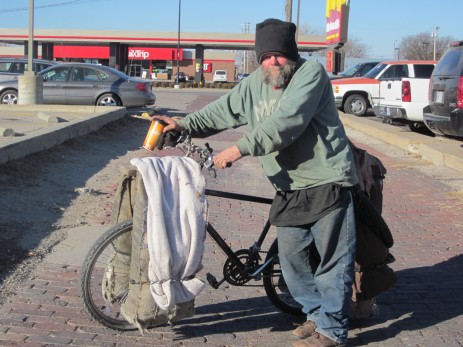 He said his name was Gary, and he was kind to stop and tell me about his stuff. He shared his creativity, his plans for the day and spring, andI knew I wanted to hear more.  And, he said I could take a picture. People are so kind about this. Not having my camera, I decided to run his direction to McDonald’s where he was heading for breakfast to hear more.

He said he was Gary Isaacson, not from Wichita, but born and raised in Callao, Missouri.  He mentioned that after the snow and bad weather was over, he’d be heading to Jackson in a few weeks. Gary didn’t offer all of this, I was prying, but he seemed willing to share when I asked questions. I asked about the cold, about where he slept, and shelters. He said that he was acclimated, told of the bridges and sheltered areas where he spent the night, and said that didn’t frequent shelters because it made it difficult to readjust to being outdoors.  He looked healthy and happy and I said remarked on this.  His response, “I’m right where I want to be.”

Arriving at McDonald’s, he agreed to read the paper a bit inside after his breakfast waiting for me to run home and return with my camera to take pictures and talk more.

One comment on “Cowboys of Delano: past and present”