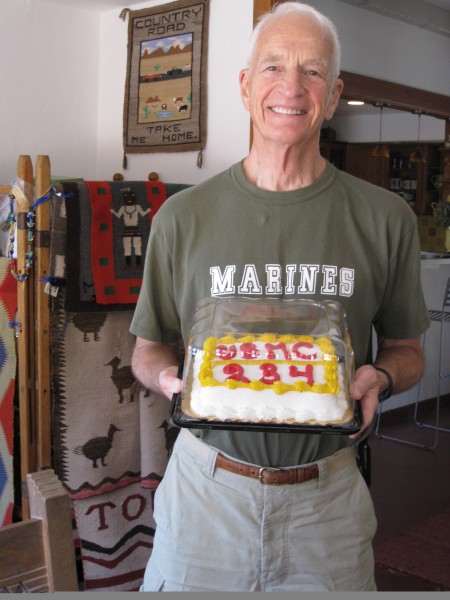 Dean Graves with U.S. Marine Corps Birthday Cake. Year confuses me, but I’m sure there is a reason.

I was talking to my parents last month and mom sent me this picture to show me the cake Dad was picking up for his gathering.  He was celebrating with fellow U.S. Marines in Tucson, Arizona that week on the 10th. So, I had to call. Here’s the story, that is, what I could write on my computer while listening to my father’s words, so take it with a grain of salt in translation:

Thurs. Nov. 10th, 2011 was the 236th Birthday of the US Marine Corps. The U.S. Marine Corps is one year older than the United States of America.

[On November 10, 1775, the 1st Continental Congress commissioned Samuel Nicholas, a Quaker innkeeper, to raise two battalions of marines in Philadelphia. The tavern’s manager, Robert Mullan acted as marine recruiter.  Prospective volunteers came to Tun Tavern, most importantly, to serve the country by joining the corps, and secondly, for cold beer. The first Continental U.S. Marine unit was made up of one hundred Rhode Islanders commanded by Captain Nicholas. Thank you wikipedia, I made a donation and changed a few words.]

My father’s officer training class was #357.

[Now called the Officer’s Candidates Course, it is currently a ten-month program located then and now at Quantico, Virginia where my sister, Gina was born. By the way, she was a $6 baby. It includes the legendary Marine Corps Boot Camp from which the common term “boot camp” is borrowed, an umbrella term encompassing any kind of grueling physical test. I’m confident any other “boot camp” pales in comparison to the real thing.]

This class has had numerous reunions over the years because this class had four United States Generals. Everyone commissioned a second lieutenant has to go through Officer’s Basic School. 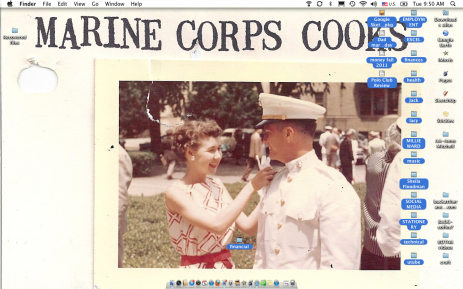 This is my mother pinning a bar or something on my Father after his graduation from Officer’s Training School in Quantico.

This picture is from the cookbook that my mother made for me with recipes of my family and friends when I was married. It is in a section entitled “Marine Corps Cooks.” I don’t have it with me to see her words exactly, but I am remembering that they included a few of the following points:

From here on my notetaking and comprehension break down because it was getting too detailed to write. I should not talk about or relay things I don’t know about but this is what is written:

That’s really the end of my notes from dad’s story by phone on the Eve of the USMC Birthday. The marines I met at the Candle Club in Wichita confirmed what he must have said, which is that after Officer’s Training he was then sent to Camp LeJeune, “Home of Expeditionary Forces in Readiness.” That is, he was assigned to a mission which he would lead and Camp LeJeune was the base where he was prepared for this duty. 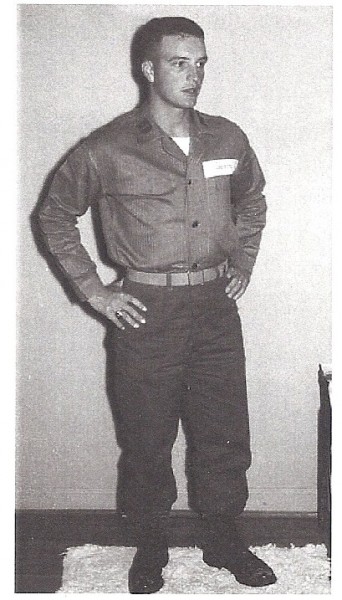 I was pretty little, but I do remember this outfit when my dad was in the Reserves. There is somewhere that I with him one time in Kansas City but I cannot remember why I would have gone. He would also be able to get us toys at the PA. He was no longer in Reserve Duty after his architectural practice began to require more time.

I do remember asking my father what he thought at that time when he was on the boat to the Phillippines.  With the humor and self-deprecating smile that anyone who knows my father can imagine, he said something to the effect of,

And, I’m sure that is what any or at least many honest Marines say to themselves so often when they go to work each day and serve our Country when on a mission.  But they go to work anyway, because they have taken it on as their duty to serve and protect our country. 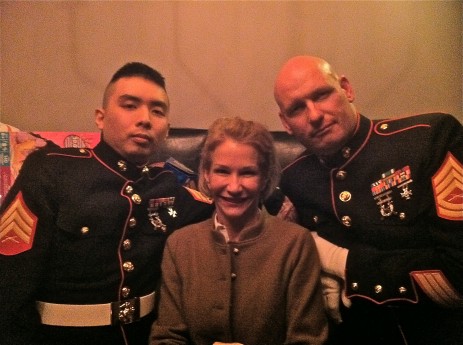 Honored to be in picture with Two Marines at the Candle Club in Wichita, Dec. 3, 2011. Another noble mission, Toys for Tots night. And they were in the line of danger with all the women that wanted to dance with them. And by the way, they hit the Aircraft Industry Events but by far cleaned up at my new club. The band was great and I didn’t dance, I took pictures. The Marine Corps also appears to have introduced a fabulous dance camp to their training regimen. Kudos.

So with whatever you choose

to be your mission in life

and from the child of a marine,