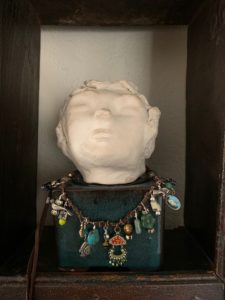 Fear turned out for a Saturday Afternoon.

Most of my life, if my selective memory works, I think I have been in a state of productive mania. I don’t remember the fits of rage, retaliation, or Indecision, for I HAD Purpose. I had a goal.

And, I do think this is most of the time, or at least MORE of the time. Or did, until I hit a rough patch, let’s just call it my 50s, soon thankfully to be at an end. In March, In Like a Lion, and let’s hope to reach 60 as the lamb of God I hope to be.

But lately, more chronically, I have had a problem feeling purpose. I’ve been working on edits for a second book, a Children’s Book that I’ve discovered is not really a children’s book at all. And, while I will hold onto Prairie Pug as a memoire, I do want to re-think if it even needs to be a book or might be better done in a blog. Mostly the writing is therapeutic for me. Sometimes, it’s much harder Work. Books, in print, or in digital, are not cheap to produce or market. They definitely aren’t a breadwinner.  So, I’l keep the ego and belt cinched, save that decision for another day.

I think I’m finally feeling and acknowledging the word “Depression.” Anxiety, though not of the sort I had when I resorted to taking xanax. This was while working at a large architectural firm in Wichita. It wasn’t the job, though I knew MY path wasn’t to even work long enough to be able to sit for the architectural exams, much less to pass them. My trail was to get Lacy through high school at Wichita Collegiate. And, we did do this, but taking xanax wasn’t worth it. After two years and about 4 months on xanax, I quit, and headed to Drugs (Off) Camp in Halstead. She was able to live with a dear family friend, Sally, for her senior year. I had been trying to live TWO lives, and not doing a good job at either. Mostly, I couldn’t go home to cook in the summers and fall, my main ranch responsibility after some “facilities management” with historic and domestic buildings. I’d ‘left my post’, though not in a deliberate way as I perhaps did later.

I still do not know the answer to that one. No big, life is hard sometimes! Was before that big (or)Deal got undone, too. No matter…

On the good side of Depression…I’ve

So, yesterday, I pulled out my beads, and followed my vow that I will NEVER buy one more art supply, at least in the bead department [except as needed to finish a piece, a fastener, etc.].

First, all I did was pull out the wire and “posts” and tools. Immediately and as was necessary, I felt compelled and stressed into seeing if I could remember how to “wire wrap” and if I still had the half-round pliers. I could and I did and it was “Good Enough”. FYI, a $28 brush-up is available at BEADholiday on Fort Lowell weekly, no problem. By then, I had started and I couldn’t wait. Messy ‘wire wrap’ had served most of my projects and so it would work “today.”

SOME TEDIOUS WORDS ABOUT TECHNIQUE

Then, I picked out my favorite silver charms and pieces, and decided that it didn’t matter if the posts were sterling silver (which does tarnish) or the inexpensive shiny ones I had. This post, technically I believe maybe called a “headpin,” is like a big straightpin with a head. You just put the bead on it, and make sure it’s big enough that it won’t slip off the other end. Then the other pieces can sit on top and you make the jump ring or loop at the top to string with the wire wrap. Then, you can either string the wire loop or add an open jump ring to this. It’s all super easy, one hour of a wire wrap class and you’re in business with help from their business. Crafts are good for the economy and MOI, on the other hand, then spend far less than in other forms of shopping.

So, doing something prevents the ‘living in idleness, mere busybodies, not doing any work’ that I can find even in the midst of trying to edit a book. We read about this in church today (2 Thessalonians 3:6-13). I’ll let you look it up if you care to, just because the interpretations are all unique, just see it as a positive impetus for me. I had decided I would make gifts for Christmas for new family members. I had a purpose for the act of making something. But it was the making it that made it therapeutic, the STARTING came before the purpose, for I had remembered the medicine. It was so meditative that for the first 1+ hour, I just organized, designed, and basically made a plan. It’s like when Jesus brought the hungry man to the older lady who was despondent. She got up, she made food and drink and she had purpose. My Jesus, I guess, being those ladies who shared about their projects.

Here are some of the thoughts and things about the necklace I’ll share that also relate:

In the center, I used one of two “chandelier” earrings I’d kept after losing it’s mate. These are by the jewelry designer, Ayala Bar (Mosaic at Denver International supplied the name I couldn’t remember but the gift given to me was from Aspen Boutique, Wichita, don’t believe they still carry her work).