Louie Louie where are you? 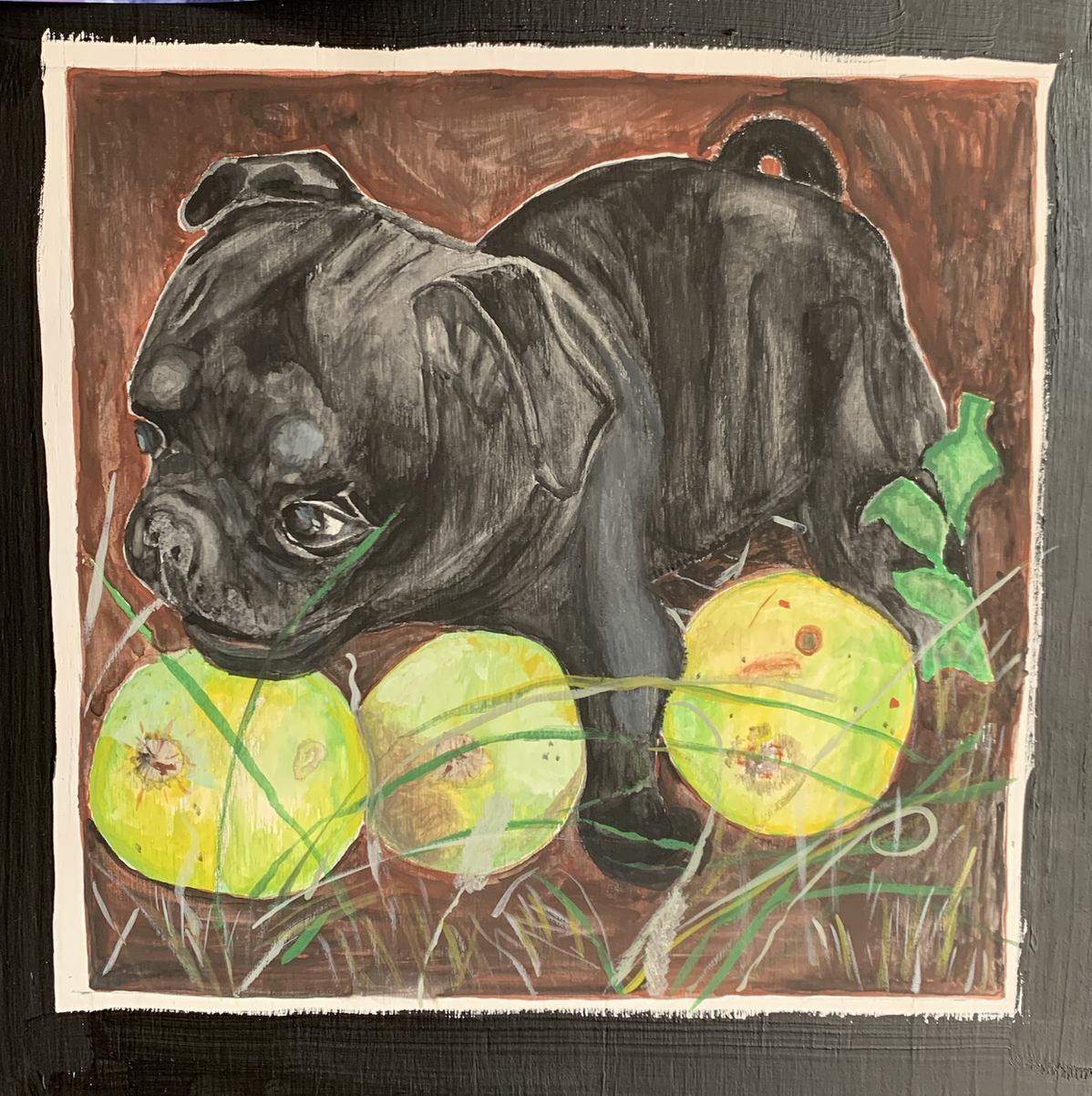 Louie Louie where are you?

Louie Louie ‘loved you, too.

Even though we never met

Louie so much more than pet

Never knew you were so fragile.

You were there for steph and jack

Oh so bad they want you back.

Only new diverts from pain

Never knew how much the gain 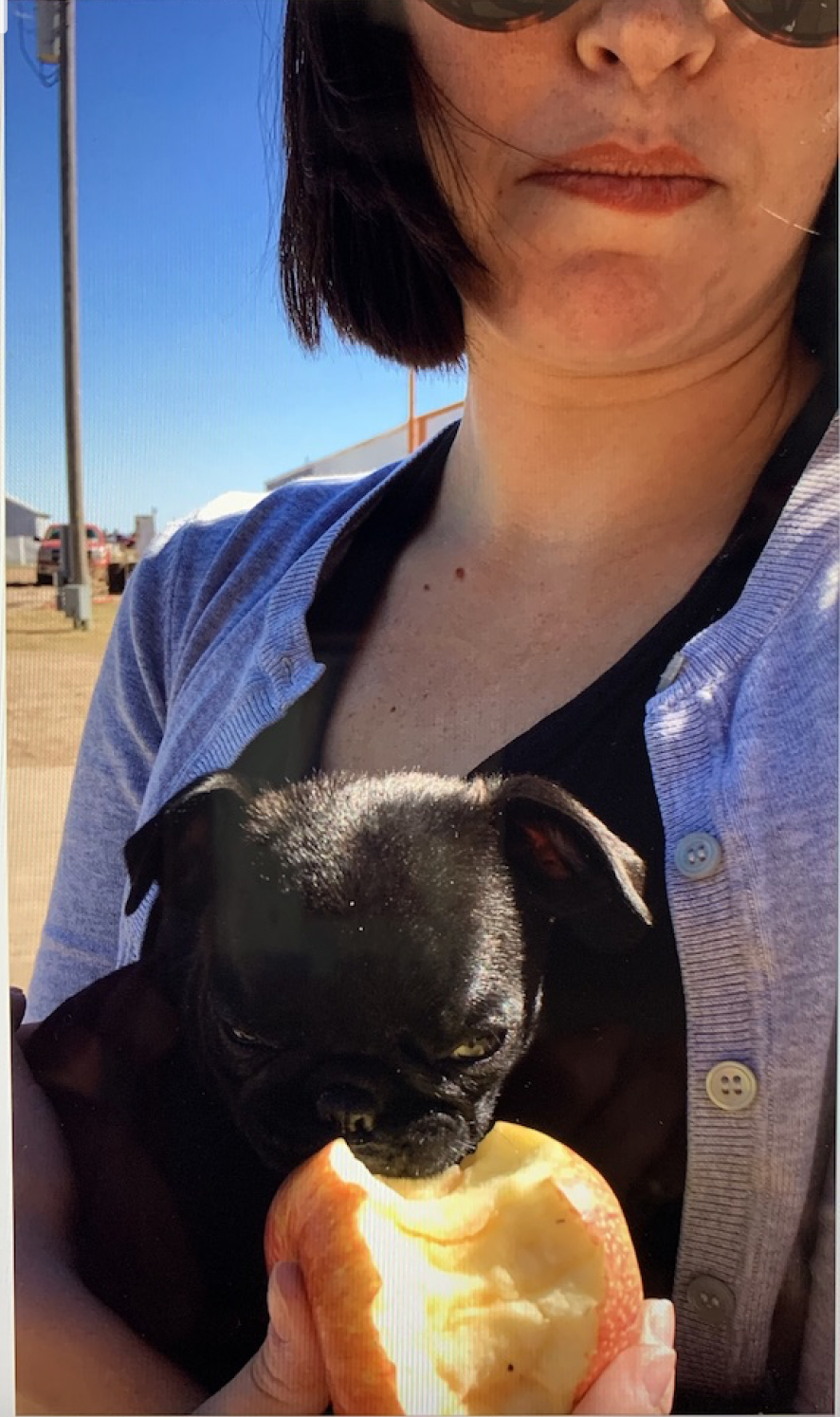 Yes, In memory you are back.

Even if there is some debt…

With the sadness of the past

given’ given’ did give 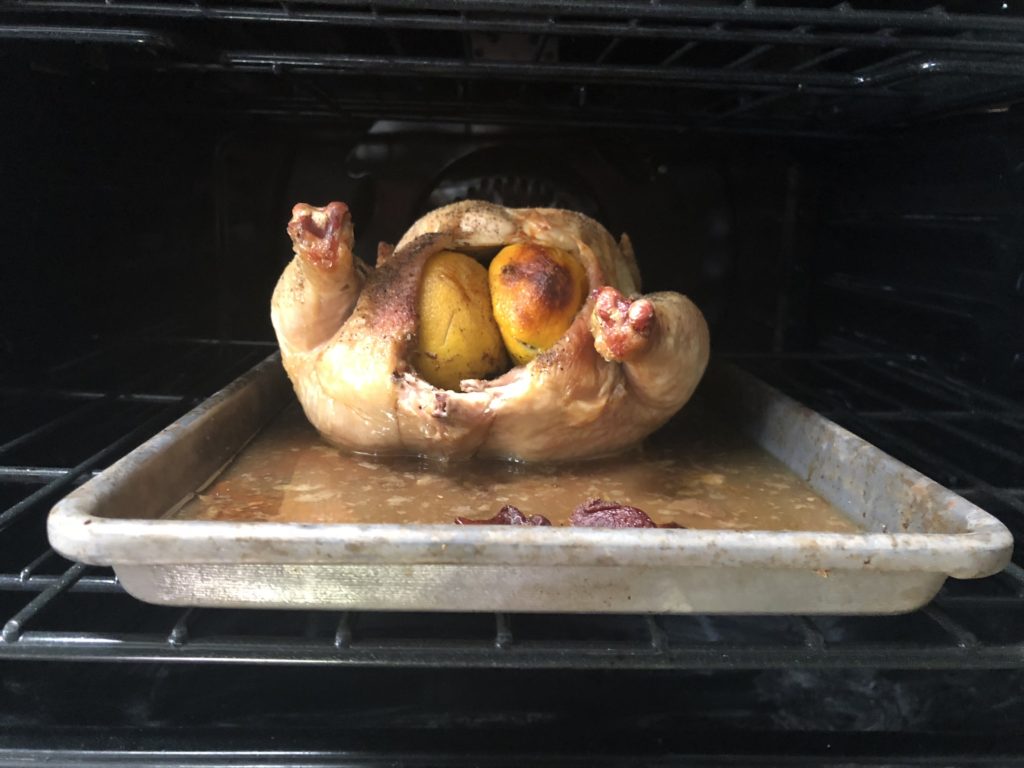 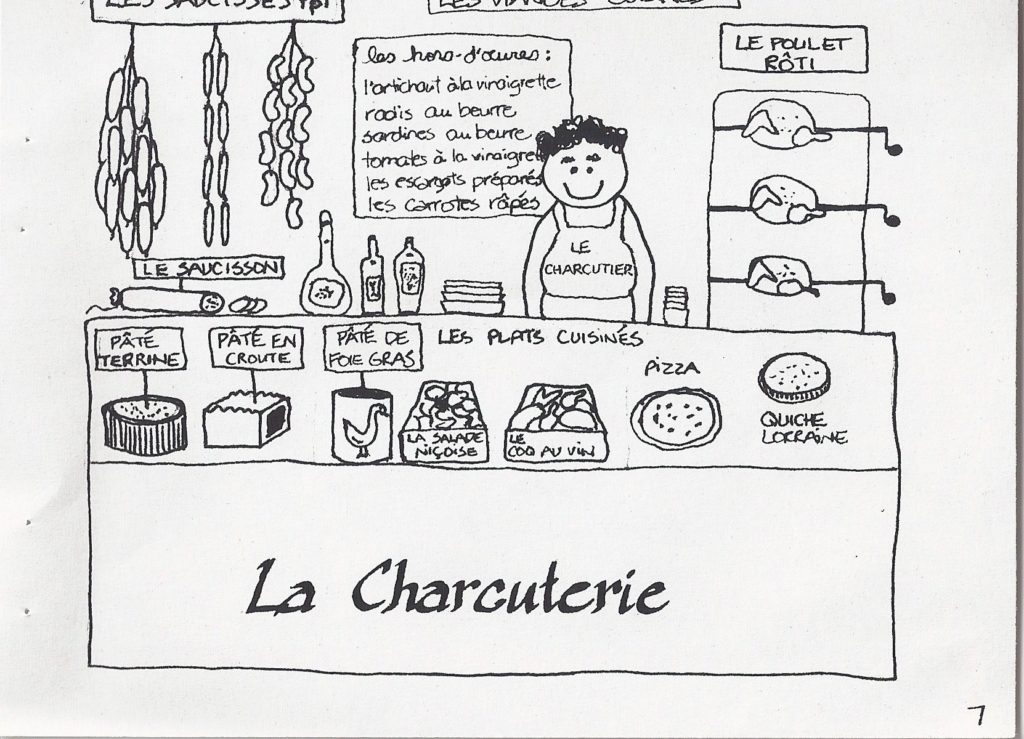 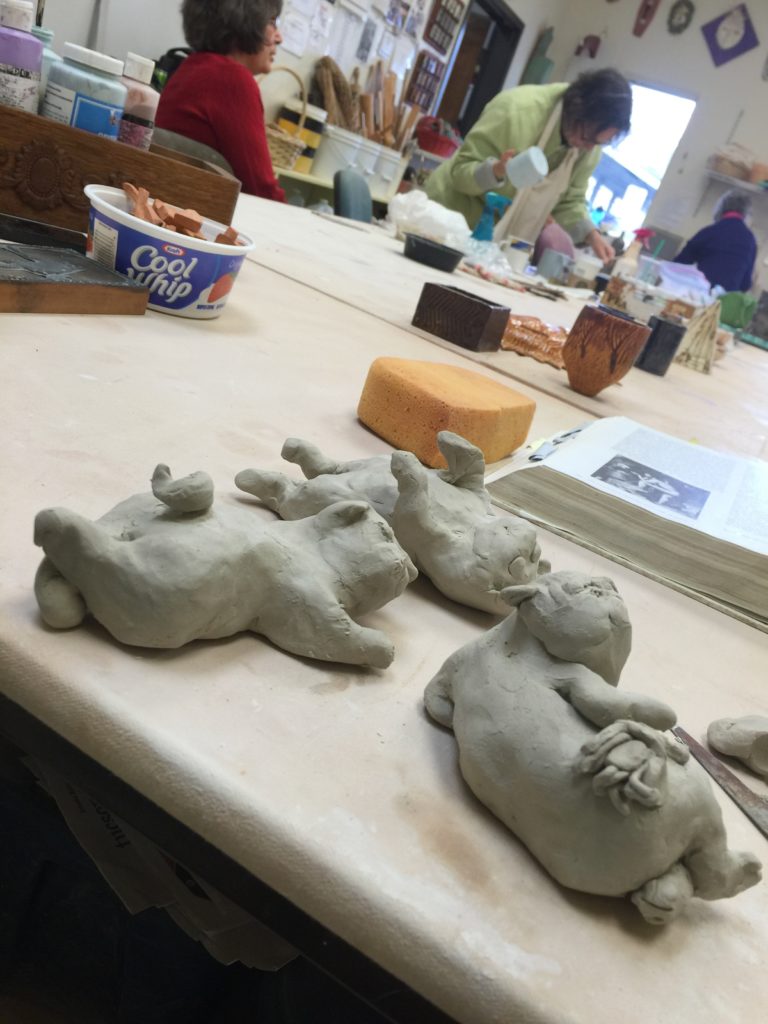 P:  “Rose!  [her head was turned, looking over her right front leg with quite a critical look on her face.] Careful with the neck! What is the problem?”

Rose:  “….a stunt tail. We’ll have auditions, to be sure there is no unraveling.”

P:  “What’s wrong with your tail? You have a perfectly nice curl.”

Rose:  “No, we need Perfection. I don’t think my tail’s is quite as taut as it used to be. It just won’t do.  And, I’ll add that at the rate you are moving on my movie career, I’ll be in the group kennel and that’s NOT the role I want to play.”

Rose:  “You know. Elder year co-habitation. Personally I think it might be happening earlier when we are still young enough to have some fun, so let’s get on those Behavior Lessons at PetSmart. You need some training with me.”

Rose: “I think I could do very well with the proper Mistress, hmmph-hmmm.”

P:  “Back to your role…just what is it that you will be in this movie?”

Rose:  “Well, I’ve researched many roles that involve one of the things I do best, that is recline.”

P:  “Oh, I agree, you’d be great. In fact you’ve already done this for me.”  {muttering…’they might want to drop the snoring’}

Rose:  “I HEARD that and it’s hurtful. Take it back….Oh, well….you’re right… SOMETIMES, I suppose.”

P:  “What about a patient in a psychologist’s office? Like, on their couch.”

Rose:  “Me!!?? I think you’re projecting but that’s a very good idea. I think I’d have to pay for that job though”

Rose:  “Yes, it might be tough if I had to wear a uniform.  But, a stunt tail really has skill potential. They may find some use for it. Like…hmmmm…maybe a whistle could hang from it or a billy club.”

P:  “Rose, I don’t think security people use those (or maybe anyone) anymore.”

Rose: “Well we will have to have the auditions in really hot weather, that’s a good test. And somewhere really hot, like Tucson. They can’t be too young, I don’t think this movie series really begins until we move to the city.”

Rose:  “I  was just seeing if you were paying attention. Okay, I’ve got to go…”

Rose: “Well, only my hairstylist Robert Markley knows for sure, but I am toying with the idea of a little enhancement and that’s all I will say.  He may have some ideas on tail curl also.” 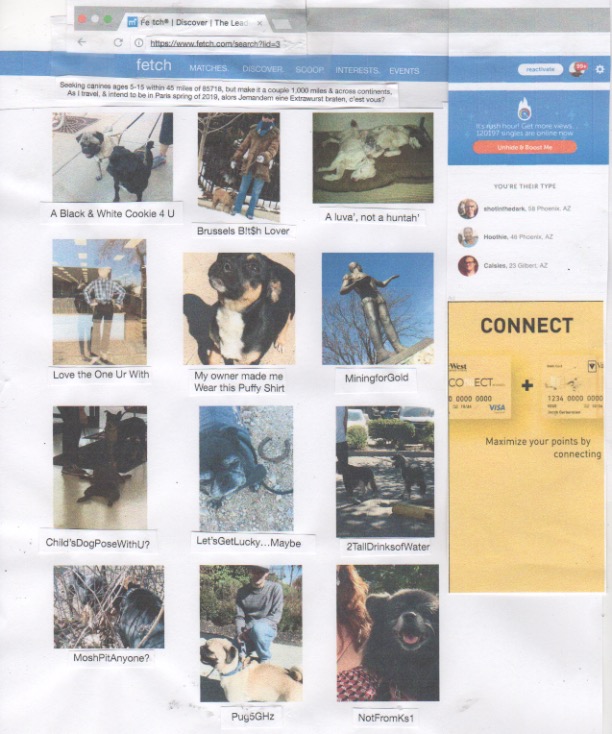 Rose:  “Looking for my weekend date.”

P:  “Oh, no one really does that anymore, we just can’t get free of the auto subscribe with all the emails… one has potentially used.”

Rose:  “Yes, no one in your age bracket is dating or even trying for that matter. So, that’s why it’s opened up all this bandwidth for Pet Use.”

Rose:  “Just what I said, why do you think all the dog parks were suddenly sprouting up all over eminent domain.  For the fertilizer? Just think of it as somewhat of a commons…but for hooking up.”

Rose:  “Come ooon…what’s the worst that could happen? We are all fixed. Are you worried about inappropriate haunching?”

P:  “Why? Pugs, Brussels Griffon and English setters. Though I’ll agree with you about the last pair…I think in reality they HAVE been on a hunting trip and they could have had a little less ex-pose-ure for my taste.”

Rose:  “Ditto and they’re not fixed, enough said. But, they are all family. That is,

“All incestual….just feels wrong…moving along…I’ll start”
“One and three, definitely a maybe, two is cute but complaining about his mother’s dominance so that’s a demerit.”

P: “Rose! the Little Boy in western wear and the man on the end…! ?

and Coronado… looking for Gold….in bronze.”

Rose: “Hmmm….well, I have a hard time identifying when I’m out of my breed, but boys like that always play a lot with me and let me lick their hands and Mr. Coronado seems very fit with quite the ‘hard body’ . Plus, he has on some nice hotpants, so I’m going to keep him in my ‘maybes'”.

Rose: “Hmmm….maybe I should consider a little touchup, what do you think? Do you like the horseshoe that was from down on the wash?”

I’ll tap out a quick message…I have to start grooming for the dog park. Can you handle the toothpaste and some shoe polish for my ‘museau’?” 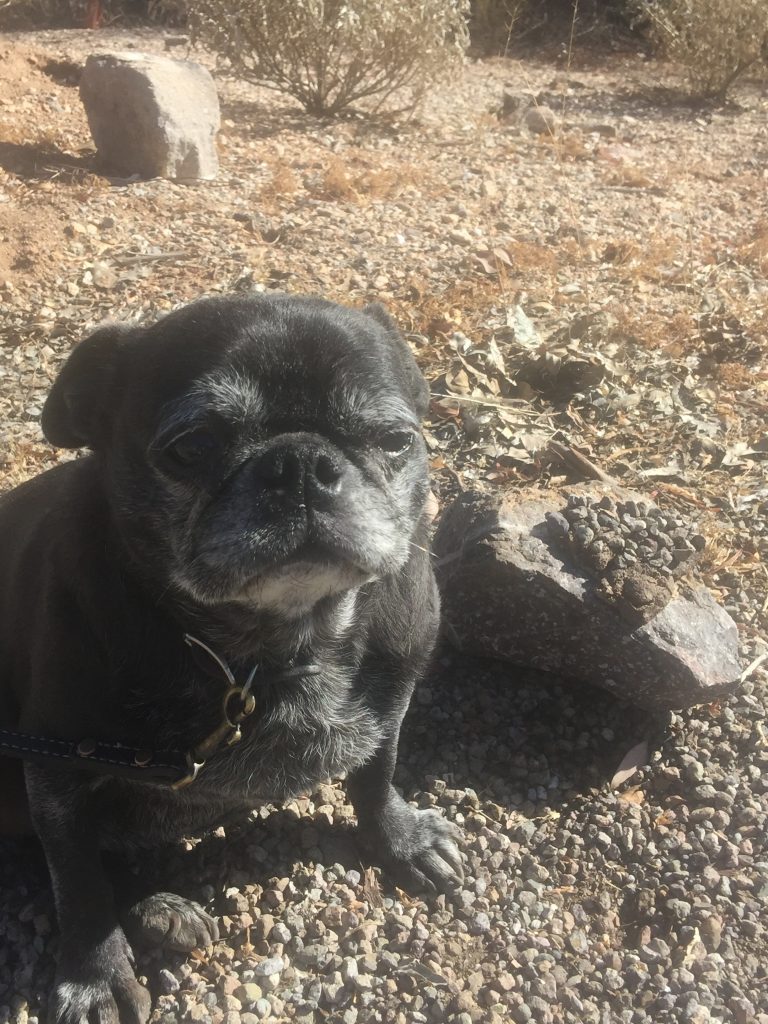 P:  Rose, what is it that you are getting into???  Seriously…

Rose:  Well, no one has left me anything really tasty lately, so I did think maybe it was time to go to the local Trader and get healthy.

Rose: Wrong again, that was Whole Foods. And, it wasn’t really that bad, it was just that I thought gluten meant vegan and I am not ready for that. In fact, it just isn’t in my 12 steps.

Rose: “What?  ____or be killed? Maybe tasty people who haven’t lived on a ranch full of coyotes are offended. Maybe they need some wilderness training on the Hi Plains. How do you think we became so revered in Asian countries…survival of the cutest face’est & intuitive-est….

P:  What kind of hard stuff?

Rose:  Well, I do like the higher fiber from Dr. Poage’s .And, the gluten free at Whole foods wasn’t bad. Honestly, I really like all the bright colors though, like Kibbles & Bits and Rachel Ray’s…

Did that Hill Brothers settle your tum after you found that delicious lunch someone left for you!??

Rose: Yes, but I mean it, I need that other stuff, it is HARD. Industrial Strength, like Foddy & All Bran, Tuff Stuff. I think there are some kind of chips or something in it…maybe I’m supposed to be spreading it around the ‘hood.

….I dunno, Dr Pogue never really gave me any instructions when I went in last.

Rose:  I don’t know….I think something with Bits, too, like maybe Simply Bits…It sounds delicious to me, I really want to try it, so hurry up & get your phone & purse.

Or, leave the phone-no pics. I feel I may have some kind of conflict of Pinterest.

But, bring your  cappuccino…on second thought,  bring it. You can get some Stars with your few last bucks. I heard your Gold Card is expiring. And…well…maybe not part of the program, BUT…. 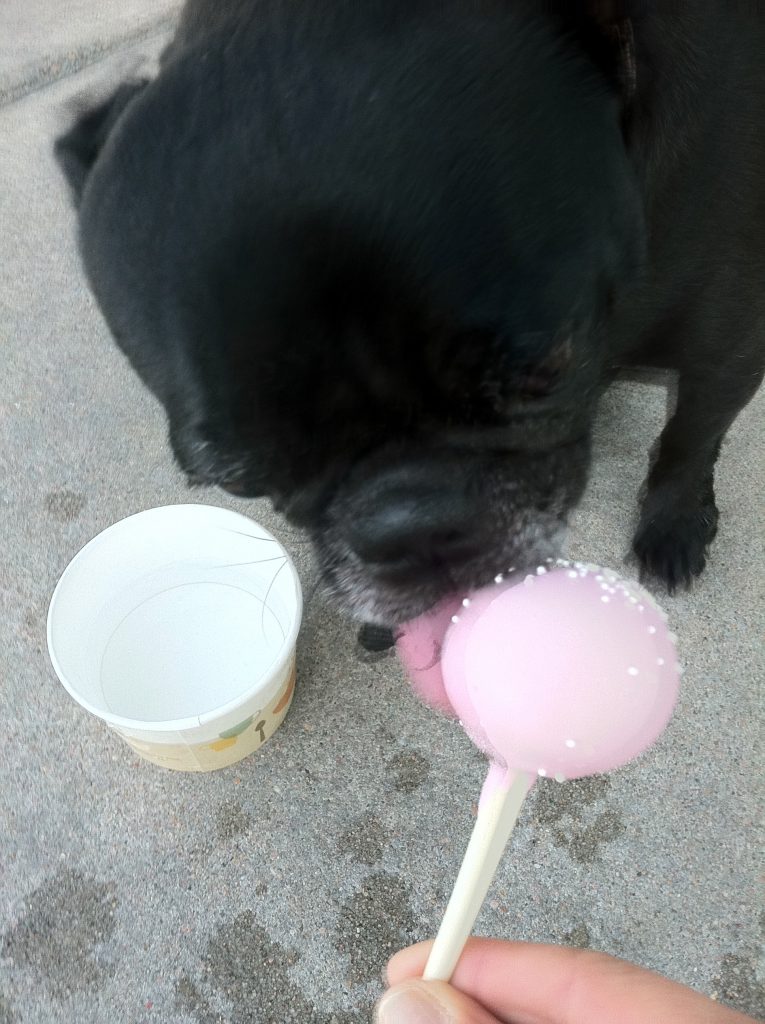 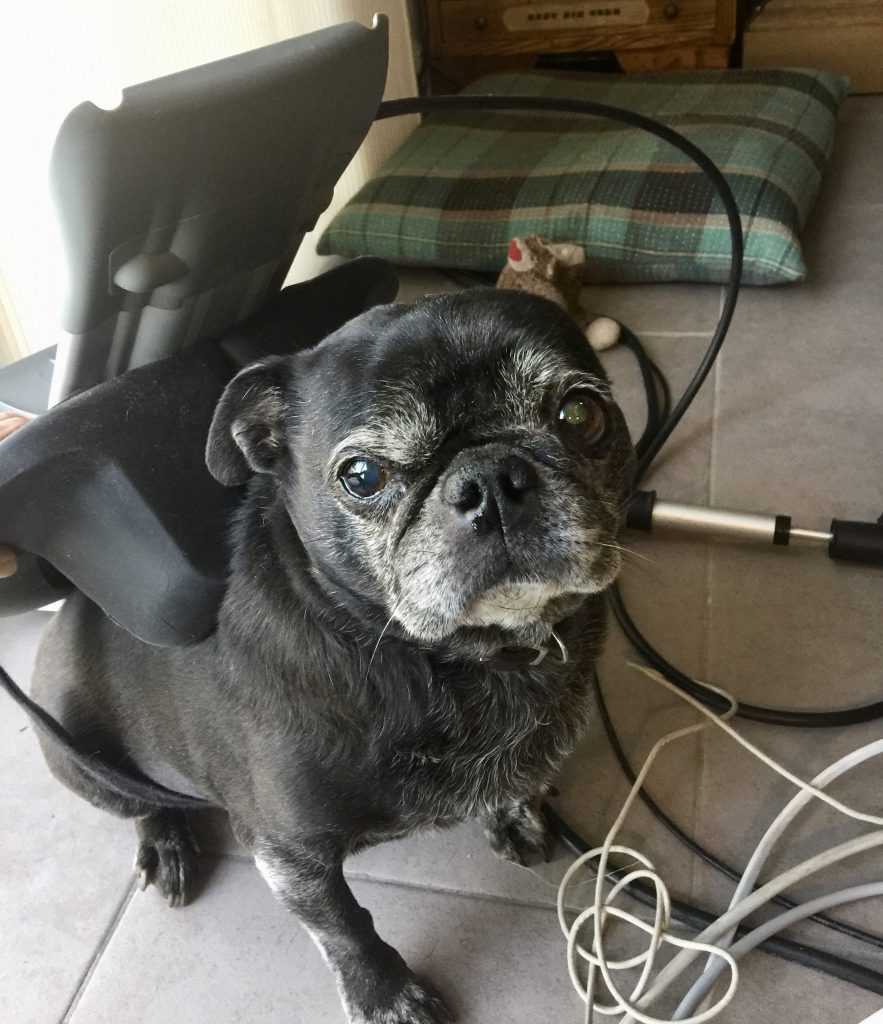 Um…well, I am trying to avoid ‘the formation of lesions in the spinal cord, particularly the part located at the base of the neck known as the caudal cervical spine.  If these lesions form, they exert a compressive effect on the spinal cord.’

P:  Rose, it sounds like you are reading that right out of wikipedia or google or something, say it in plain language.

Rose:  No, it’s from Pug Village, and yes, I’m blatantly pugiarizing. But, I can’t say anymore, it was difficult and painful enough to read about it. But, I did think I would just borrow this apparatus. It appeared it might ‘strah-dle the caudal’ discs and avoid this problem.

So….why aren’t you lying on your back?

Rose:  Ok, I got another job. I kind of got into a little bit of a deal legally which is another story. I don’t want to talk about it. But,  I’m not a rotary anymore. I’m kind of like, de-rotarized.

P:  A Rotary? You were were kicked out of Rotary? I didn’t even know they had a pug category.

Rose:  Oh, no, I meant a Notary. Remember in spring of ’15? You even used me to buy your townhouse from Miriam, the Tucson Belle. You wrote about it when you were experiencing para-iOS-anoia & got me all wrapped up in it. I hear it’s quite common with those in your generation, the delusions & everything. Really too bad…

I don’t know.  And please don’t get off on me, it was a cute poem.   That sounds pretty serious, to have had your notarization credentials rescinded.

Rose: Don’t even ask. I guess you can ask the Sheriff about it.

You guys seem to have made up, but I….

well, I said I wasn’t going to talk about it. Let’s just drop it.

P:  Rose, if you are working I need to know something!

Paula:  Okay, so tell me about this job…I mean, is that harness a part of the job? It looks very heavy….like you could carry your bike on it or something…

Rose:  Oh, don’t pay any attention to this, I know it’s not very attractive.

Sometimes I cover it up with a backpack.

P:  Trawling around where?

Rose:  Oh, just whatever spot I happen to find myself in.  Sometimes if it feels hot, I stop in that stop, I like warm places.  And, Just because I’m getting a little grey, doesn’t mean I can’t keep all the circuits going …there’s work to be done out on the street. I’m kind of a chien de la nuit.

I can’t really discuss my work. 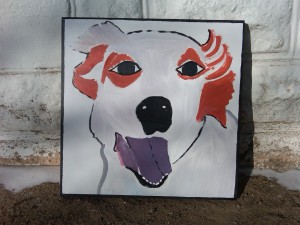 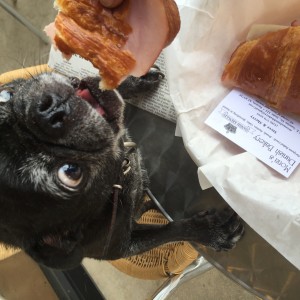 Shavasana, Rolling to One Side

before even attending a class.

Rose is a Rose…Yet unformed.

Adorned and Unformed, that is The Rose.
When No One’s Around,
She strikes a Pose. 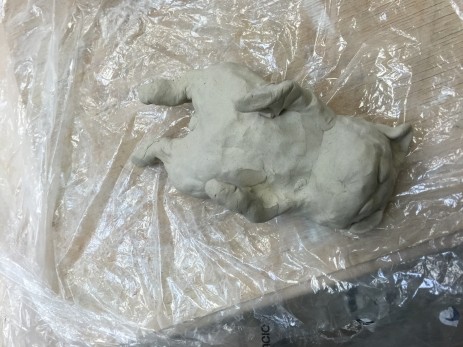 It’s Time to Work
but was taught to Play…

Her hi plains and low plains,
all over the Spectrum…
Without a filter,
“Please ‘teeth‘ not the r.Ct.m!” 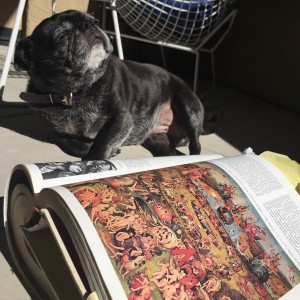 The Delight-ful Garden of Earth…Thank you, Mr. Bosch and the Museo del Prado by way of Helen Gardner’s Art Through the Ages, 7th Edition. 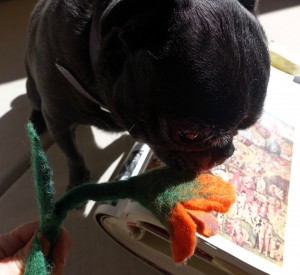 Stop the churn
pick up the Pen.

Sew herself up
with velvet and flax…

Find Some sort of Mid-dle
Perhaps in the ‘taile’

For circles and curls
perhaps weren’t a Snail…

But A Serpent’s Dance…

So, tame the attack
and temper the fear…

Just Begin,
a Pro-cess
gets clear.

Roses and Poses
with her You can play…

For Rose is unformed
But yet…
can-Not stay…