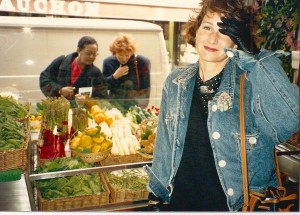 I went to school at the Museum of Decorative Arts in Paris with Parsons School of Design, New York City in 1980.  But, it wasn’t necessary to take French for the School of Art and Design at KU.  After five years of Madame Honig (Indian Hills) and Madame Speidel (Shawnee Mission East), I decided that I was not going to forget those words and I took French classes all my semesters at KU.

I went with the French Department at KU with the French students with whom I traveled for two weeks (chateaux of the Loire Valley, la cathedrale of Bourges, Morzine in the French Alps, Chamonix) staying in youth hostels.  Three days before they departed for the French Alps for Paris by bus, I had to be at school at the Louvre because the students from New York were arriving in Paris, and I took the train by myself during the night.

A woman of a certain age plus twenty years took me under her wing et told me to take care to stay far from the dark men of Paris. It was useful advice for the entire summer (it’s just my opinion, but I think that the French have never embraced the words politically correct, particularly not a country whose metro signs said “give your seat to the mutilated of the war.”) I love the French.

After the summer in France, I dreamed in French.

And after I moved away (withdrew) in my head and to the country, I dreamed (yearned) of France.

When I went running on the Cimarron River, I dreamed of my running route on the banks of the Seine by the Louvre.

When I made homemade baguettes for the cowboys (too funny, a woman who bakes…there is not even a word in French for bakes, much less, bread) I daydreamed of the bakery on rue du bac near l’hotel Cayre on le Boulevard Raspail where I lived that summer.

France, I dream of you still.

Here is my book of that summer, the food, the buildings, the people, the strange men, the professors, my epicerie (like a deli with artichokes), the boulevards of Haussmann, and the stories of that summer when I was able to be a young French girl from Kansas. With only myself, but never alone.

And now, my French friends have returned to me in Kansas.