I know that if I was ever on a Wagon Train across the Prairie in a former life, I most certainly would have had a large trunk labeled “outfits west.”

This is a story to be added to, for the good Kansas girls for whom it was a rite of passage are climbing out of the sideboards. So far, Sally Malley Stevenson, Barb Goolsbee Bollier, Ginna Getto, Linda Warwick Manco and Terry Beach & R. A. Edwards daughters with whom I have to follow up.

I only know how I got there. My grandmother, Mildred Evelyn Lee Ward grew up in Hays, where her father was a professor at Fort Hays State University. This was one of numerous Kansas History outings we took, a few others being the Garden of Eden in Lucas and fishing at Juan Madden Lake though I think it now has another name. There were two other driving trips to southern California and Texas, but many, many to Santa Fe and Taos.

If you’re new to Kansas, skip this next.  Unless, as my father Dean Graves would say, you like to follow Kansas family history as you would a sporting event. He’s very good at it, I might add. I do it because my mac tech guru understands better than I that perhaps my only “point” is in fact some people and relationships and places recorded at a given time in Kansas through the eyes of one woman, though who really cares?

The first year we went with Marianna Kistler Beach of the Museum with the beautiful Chihuly chandelier at Kansas State University. She and Millie were friends and friends of art. My grandfather was the young lawyer partner of Ross Beach, Sr. and then Marianna’s husband Big Ross who passed away last spring. Ross was, among many, many other things, Jerry Moran’s first campaign manager. Anyway, Marianna’s grandgirls were a bit older and we didn’t know them before, but Terry Beach married R.A. Edwards, Lawrence. For the SMEasters, Senator Harry Darby’s four daughters were Radar Evans’ mom, Mary Alford’s mom, Harriet Darby Gibson who’s husband my father worked for at Darby Steel Corporation in college, and Joanne Darby Edwards who married Roy whose family owned Rudy Patrick Seed Co. 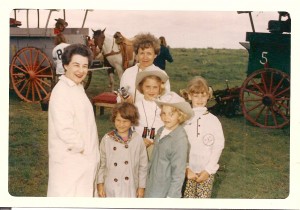 Millie Ward, Marianna Beach, and the Graves and Edwards girls. 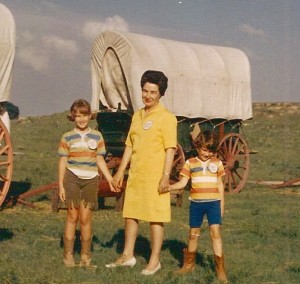 My grandmother looked like this all the time, though this was a “sport” dress of sorts. I mean, we all slept in a covered wagon in sleeping bags, so how she pulled this off I’ll never know. I don’t think she was wearing any pantyhose, though. The Lee women were pretty ahead of their time on that one, ask my mother.  I don’t think she had a pair of slacks until she was in her 90s. More about Millie later.

But, she has that determined look on her face and I know she was thinking, “I’ll see to it that one of these girls ends up in Western Kansas working in the arts and history before she moves to her apartment on the Plaza (or house in Santa Fe) to watch the lights and go to parties with artsy people.”

Already trying to get attention from the wrong men.

But enough about me for a bit and a little about the clothes…we’ll see how wordpress likes this, may have work out the quirks….you could also re-post these in the blog or be guest poster bloggers but that’s a lot of attention to ask of you for posterity.

Ginna Getto I was about 12 or 13 also and went with my mom and a family friend. I remember there was an old, old cowboy who had a horse who did tricks. There were people from all over the world on our trip. I remember feeling kind of sorry for the folks on the trip who weren’t actually from Kansas. I wore a dress and sunbonnet and whole deal one day, but what I most liked was riding along side of the wagon train on a horse.

Sally Malley Stevenson I went in 73 and I wore the “little House on the Prairie Dress I really thought I was Laura Ingalls!!!!! Remember how scarey the Indian raid was??????

And below, just for the record I got like triple mileage out of my prairie dress with the Hays Centennial, Wagons Ho! and some other historic event I can’t remember. I’m hoping Ginny saved it so my great granddaughter can wear it for the parade by the Toon Shop when Prairie Village celebrates its centennial in the marketplace in 2057.

But enough about me for a bit, the Hefners were the family who started Wagons Ho! primarily Ruth Hefner. 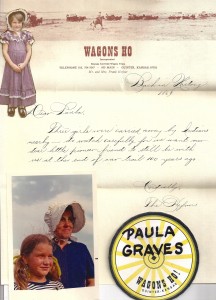 Letter from the Hefners delivered by pony express expressing concern for the "little pioneer friend" carried off by Indians to "still be with us at the end of our trail."

I just googled and it is interesting when I think that she was just a bit older than I am at 53 in this picture. I wanted to be their beautiful daughter Barby who played the guitar. What they provided in terms of capital outlay in wagons alone, access to private property, assembling the cast, music, food, sweat equity, family, and love cannot be described in pictures, just people whose lives they influenced.

She was born Feb. 28, 1916, in Dighton to James and Angeline (Wristen) Coberly. She graduated from Dighton High School and attended Fort Hays State University.

Services will be at 1 p.m. Monday at United Methodist Church, Gove. The body was bequeathed to the University of Kansas Medical School for anatomical research. 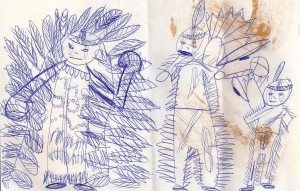 As I said on facebook, the picture still scares me.

I have this note from the first trip in my sketchbook with the Indians.

Secretly, I was dying to get carried off by those ethnic bad boys….took me a while but I got’her done. 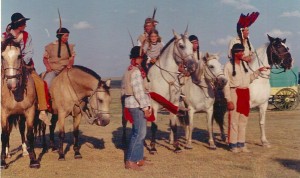 I've never received anything like this kind of attention from cowboys.

Watch out for that one, Millie never warned me that cowboys can dress up like Indians.

And last here’s a picture that my Grandfather Paul took of me with Rosie, he was ever the photographer with trusty Leica. 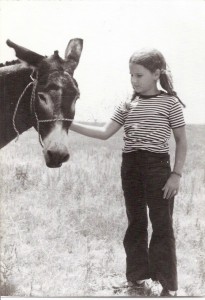 This makes me sad because I rode her when I was 5 and then again later in this picture. My old friend that I'd returned to has long since died but we will meet again. 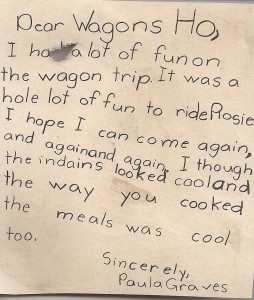 It was my pleasure. Thank you Hefner Family for that moment in time.