I started my day at Blackhawk Crossfit in the Get Fit class.  After our abs, I noticed Kim’s shirt.

Kim in her Joyland shirt.

Always interested in historic places in Wichita, I asked about her shirt and the place. Joyland was an Amusement Park built in Wichita in 1949, a  Wichita institution. Joyland was home of the Skycoaster, the oldest wooden roller coaster still standing in America. Kim’s shirt says, “Last warning, do not stand up.” This sign sat at the peak of the first hill on the ride. A sound warning in a day before we were physically barred in. 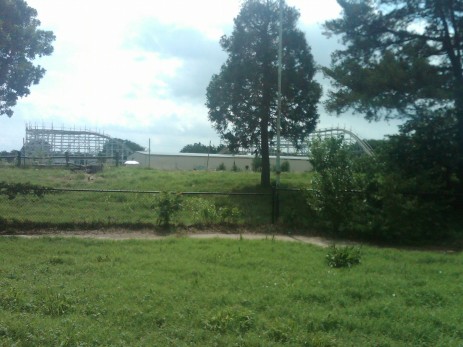 I mostly want to just share the pictures. But, Kim said that the wood is a special wood from Florida that is very hard and does not weather. The structure is still sound, with some tweaking for function, of course. It was painted white prior the the Park’s closing as the psychology of the weathered wood wasn’t understood by riders. The thought was that the white paint refreshed its look and instilled confidence. 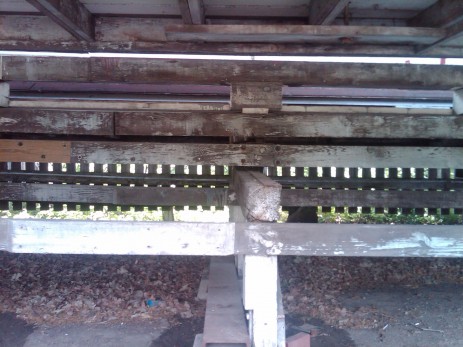 Closeup underneath the tracks. 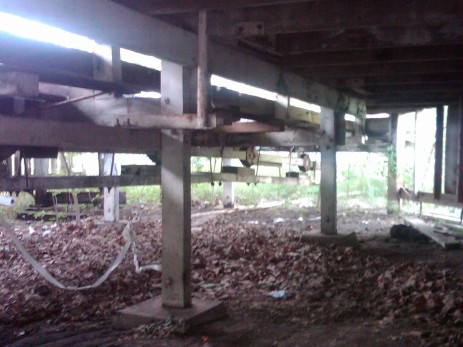 Underneath view of Skycoaster cable system. 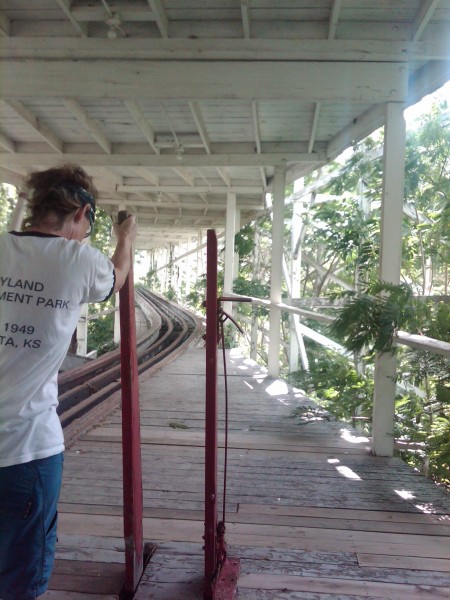 Bringin' it home with the skids.

They are in the process of raising funds for a renovation of the Park which has been closed for over 10 years and fallen into decay. 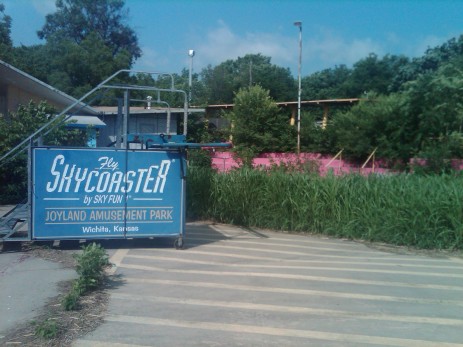 The scale seemed small in comparison to World’s of Fun. But, upon walking the grounds, it was still Amusement Park scale and spread out over several intertwining areas on a lot sitting back from Pawnee. I’m sure it was fairly rural at that time. 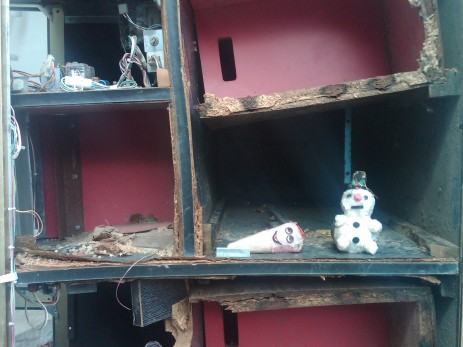 It was fascinating, a point in time that had been suddenly abandoned. No cleanup, no storage, the last night’s toys perched on the ledge. 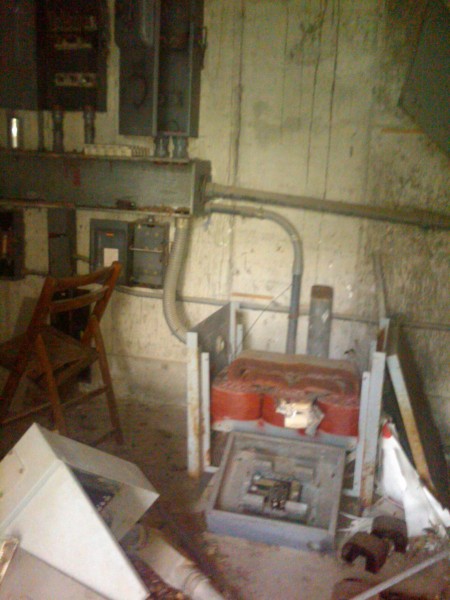 This was some kind of center of electrical operations, amazingly small. 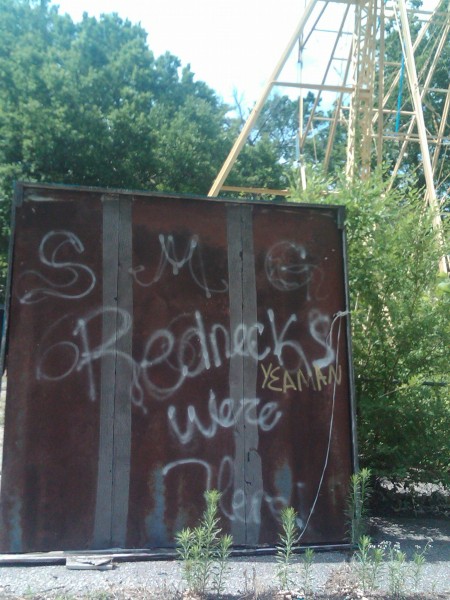 The panel says, “Rednecks were here.” But, it had been largely left alone. We noted that it would be a great shelter for the men without a mortgage (homeless). But, in Wichita they congregate in a more urban spot under the River bridges by downtown Delano. This would be pretty rural, and there are no McDonald’s around for warmth. 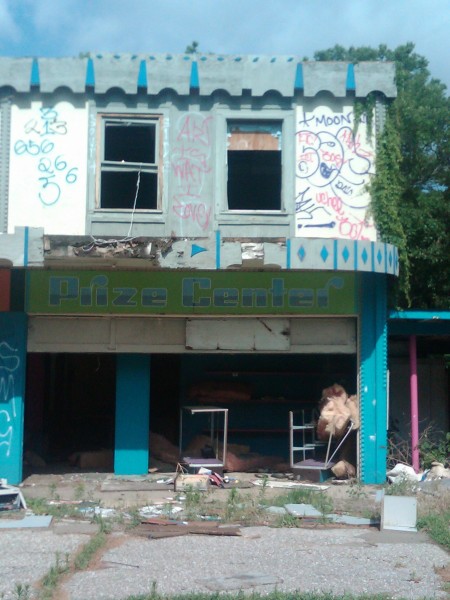 Games below, offices above.

This building with four or five bays had competitive games below, but administrative offices were above. 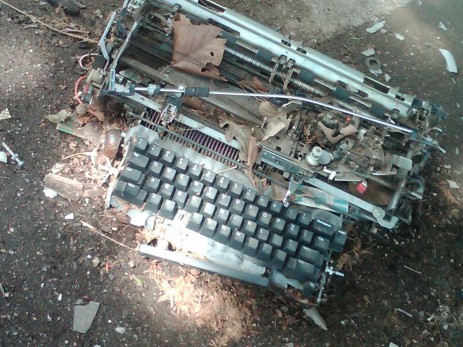 I wonder how the typewriter was removed from offices and landed below? 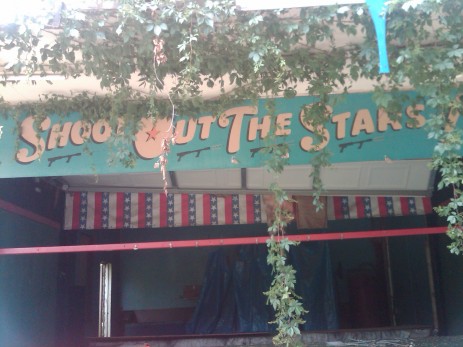 Shoot for the Stars.

I had to put this in because we had a common background with guns. I lived on the XIT Ranch for 28 years. Kim is a marketer and distributor of replica antique guns, Replica Armory, especially cowboy guns. They are used in re-enactments and films and purchased by collectors.  She has customers all over the world, Brazil, France, Canada. The French are big into historic Cowboy stuff. Some countries have regulations regarding shipping guns even with they are replicas. The are housed in a warehouse and Kim is the liaison between storage facility and end-user. This is her blog. 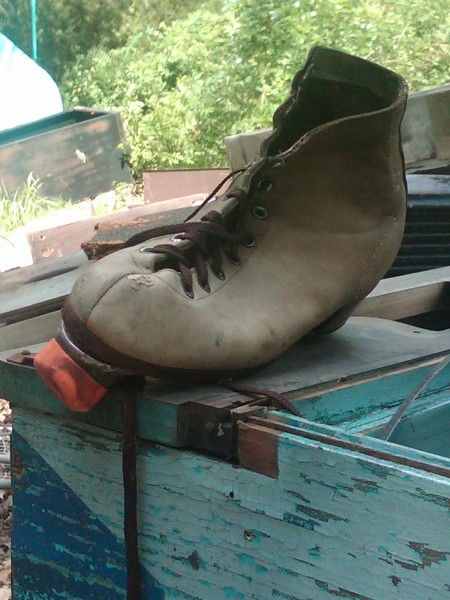 There was also a place to roller skate and we found this shoe with orange bumper on the toe. It would be like Mission Roller Skating Rink off Johnson Drive and the French Market off Metcalf, all rolled into one. But,before anything in Johnson County ever existed. 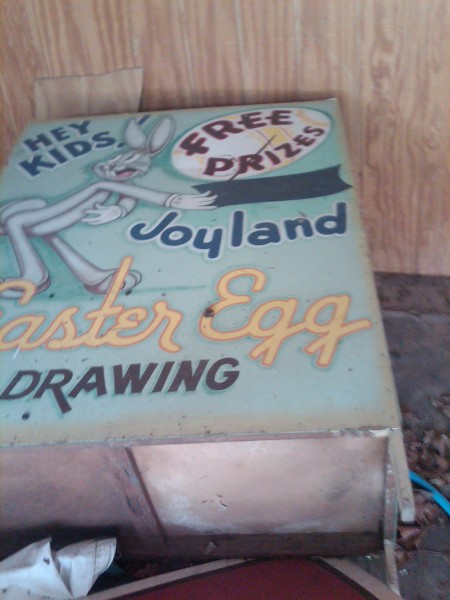 This sat in an arcade over by all the kiddie rides. The easter eggs were still scattered and shattered all over the floor. 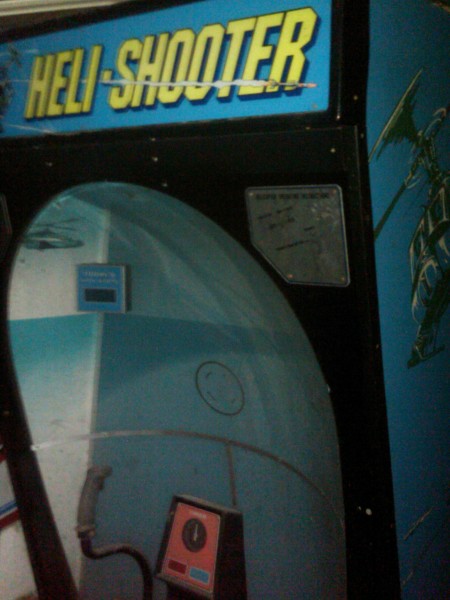 I’ll call this picture above and those below: Homage to Randy Knotts and our evening at ESPN Zone. If I’d only known the historic character of these games, I’d have suffered less from ADD this night in Chicago with our families.

This was some kind of submarine underwater game. 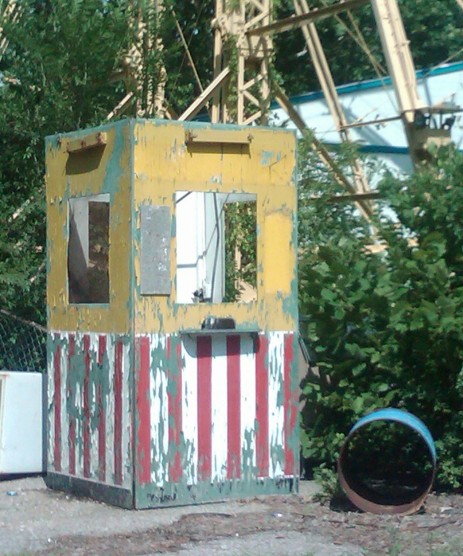 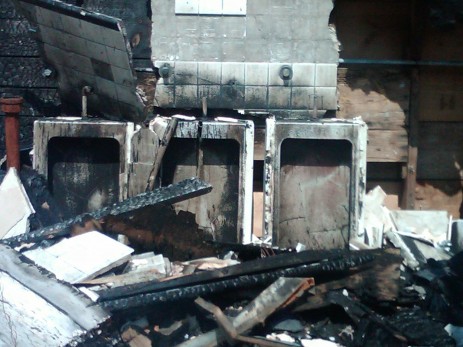 The restrooms had suffered a fire but they had been very attractive. White subway tile with black tile trim. I have never seen such sustantial men’s urinals, not that I’ve seen many. 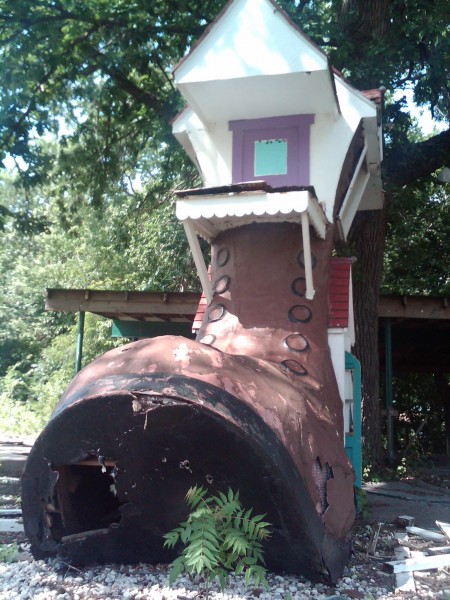 The Old Woman who lived in a shoe.

This was pretty tiny, only big enough for a small person or two. 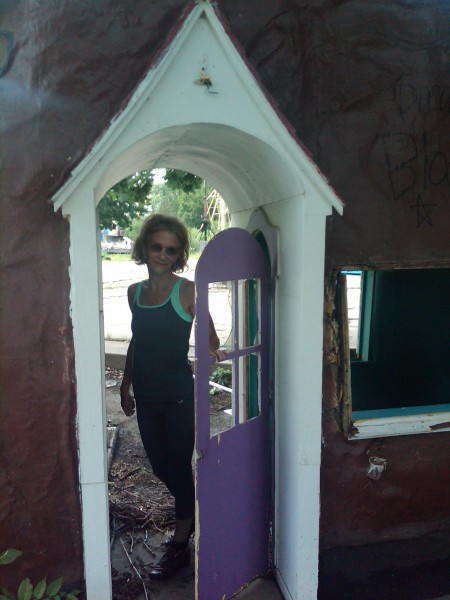 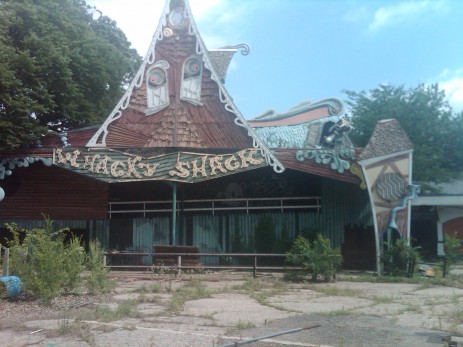 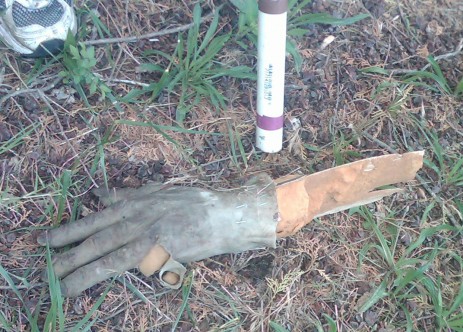 We are in Wichita, and I lived here when they caught Dennis Rader, the BTK killer. So, a hand like this in an area that would be rather spooky and sinister at night gave me a moment’s pause. 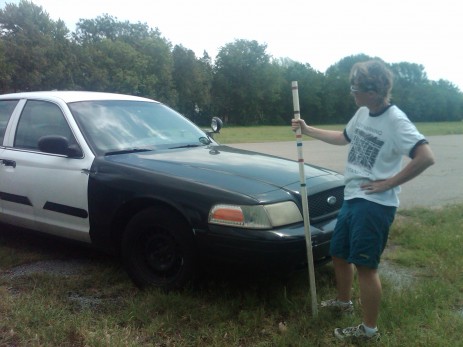 Kim and her after sale cop car.

This is Kim’s car. She said she was merging one time a bit above the speed limit to avert a wreck and was stopped. I would think this would be terrifying. The officer commented on her driving which she defended on safety. And, he said, “your car does attract quite a bit of attention.”   I can imagine they aren’t really pleased. I had actually thought someone in our crossfit group was a police officer. But I thought perhaps this officer had fallen on hard times. It’s  stripped and with a bit of hail damange. 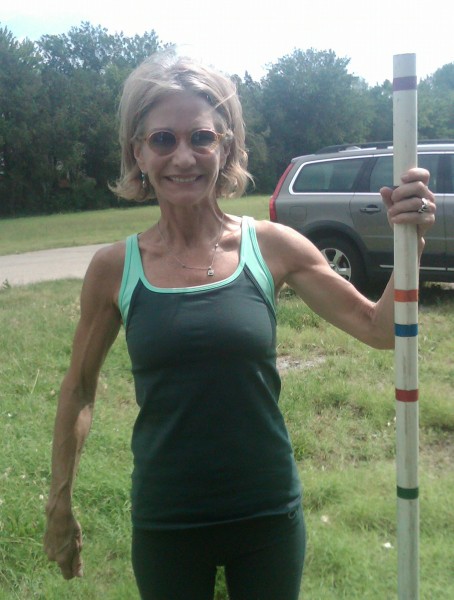 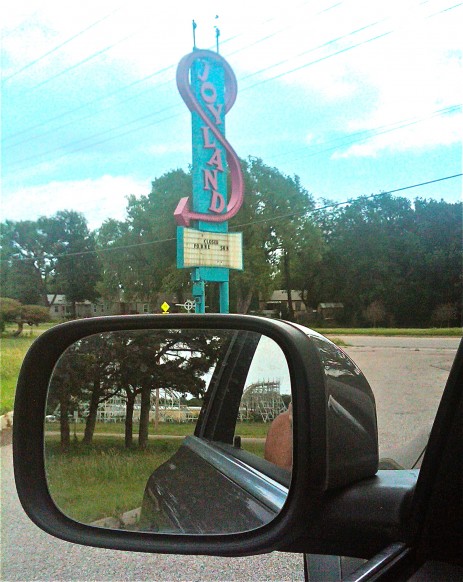 It was a lovely morning. So glad I asked about the shirt and we headed out to look right after our class. A new friend and an old hangout. That might become a new gathering spot. So I love seeing this Skycoaster in its 60s with some age and interest. And capturing a place in time which could go shiny or decay, but will nonetheless never be the same as it was today.