A moment’s pause from gems from the young gals…State Line: Yoga and Hi Hat and Ted.

I was late to arrive at Yoga Fix at the bottom of the Reece Nichols Building in Mission Woods. I’m an out-of-towner so I always want to respect each neighborhood’s protocol. I had experienced that Bikram on 39th locked the doors and people are advised to arrived 15 minutes early. Never going to happen. But, I was still a minute late and my mat was 200 miles away in Wichita. So, I whipped out my card and asked if I could borrow one and pay after class so that I would not further disrupt.

So into my hot [ter than hell] yoga went I….

My child’s pose was endearing.

My wheel was spinning round and round…

My crow cackled with glee!

My Shavasana (corpse pose) always lacks a little. Time enough for that when I’m dead. I’m out of the door.

Forgetting about the dollar I owed, the woman stopped me, “Are you Paula Adams?” she said.

“There’s a post-it here about the mat rental.”

I pay the dollar and ask, “how did you know it was me?”

“The last girl left a description.”  Of course, I had to look at the post-it.

Well, I was feeling so fit and alive but it did put a bit of a crimp in my happy baby.

So, onto Hi Hat to grab my mocha and pain au chocolat (post yoga, max chocolate, must get all the endorphins going).

And, saw these handsome gentlemen holding court in the 9 x 9 space that T. Jensen has allowed for those choosing to sit inside (it is brisk February). 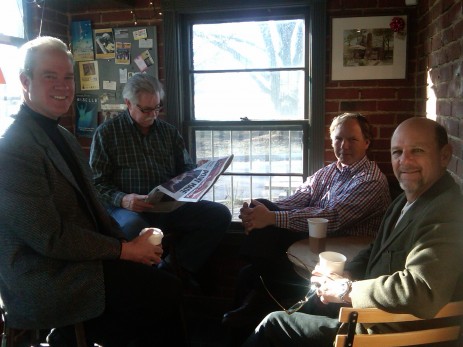 Men's Morning Coffee at T. Jensen's place. See what I mean about the size? It's an old cottage-style brick gas station. FB has identified far left as Dorcy Troutman.

I’m looking and feeling a little a little low and they kindly struck up a conversation as I waited for the decaf mocha. At this point in time, I didn’t wear lipstick or mascara to work out and the ballcap was on. I’ve now changed my tune on that.

I think there was some kindly remark about working out, so I had to show them the post-it that I had kept.  And the man at the right offered his story. 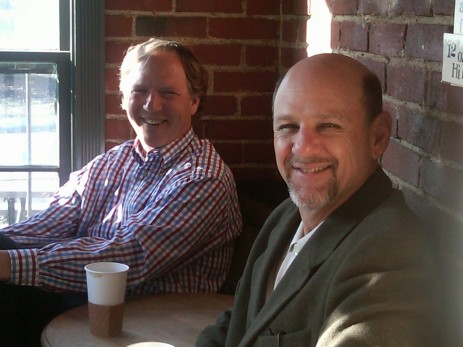 Trop de Testosterone Ted and his buddy at left.

“I was on a golfing trip with some guys in [some exotic place or well-known course or something, don’t play golf, don’t remember these things]. An attractive younger woman was talking with my friends and asked who they were here with.  They gestured to me. I overheard her say, “that short bald guy over there?”

I said, “too much testosterone?” His friends said, “hmmm…it’s a gift.”

So, Too Much Testosterone Ted, keep it up.  I think we’re all lookin’ good.

And, for the record, a senior is when one reaches 50 so  I was, at that time, indeed 50 for a few more days. So, it doesn’t bother me so much. It just doesn’t seem like this should still be the term, though, until we get some good stuff like discounts on movies and airline tickets.