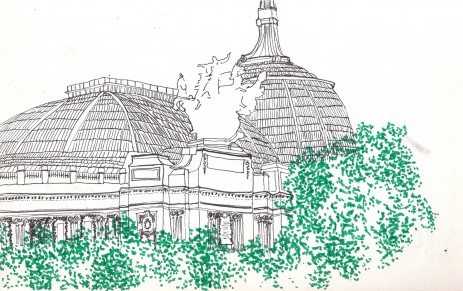 Le Grand Palais is located on the right bank of the Seine as seen in this map of my running route in Paris. It is across the way and east a bit of the Eiffel Tower, and just west of the Place de la Concorde, the Tuileries, and the Louvre. This was the west leg of my no-brainer running route (where I would not get lost) when I lived at the Hotel Cayré on Boulevard Raspail. 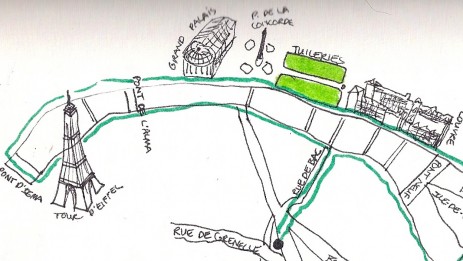 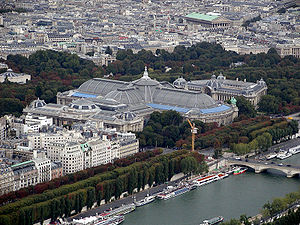 It was constructed in 1897 of iron and steel with a glass barrel-vault and was one of the last buildings of this type inspired by the Crystal Palace in London, for the Exposition of 1851. These glass and steel structures were necessary for large gatherings of people before the age of electricity. 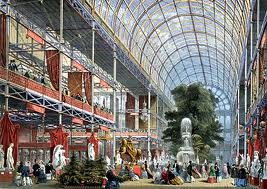 The left wing has been a science museum since 1937, the south wing is occupied by the University of Paris IV, and there is a planetarium which is one of the first of its kind.

The construction of le Grand Palais began in 1897, following the demo of the Palace of Industry, in preparation for the Universal Exposition of 1900. This project also included an adjacent building, le Petit Palais, and le Pont d’Alexandre III which many consider to be the most beautiful and is definitely the most opulent bridge in Paris. But I won’t digress into bridges…

It is a Beaux Arts building with a formal floor plan but used contemporary innovations of the glass vault, iron and light steel framing, and reinforced concrete.

Its original purpose was to house the great artistic events of the city of Paris. I think it is interesting that this project was awarded to four architects, Henri Deglane, Albert Louvet, Albert Thomas and Charles Girault each with a separate are of responsibility. Not big famous names that are particularly memorable to the masses, comme moi, but a great display of teamwork in design, often a feat in itself.

There are a number of allegorical statue groups including work by sculptors Paul Gasq, Camille Lefèvre, Alfred Boucher, Alphonse-Amédée Cordonnier and Raoul Verlet. The two statue groupings on the pylons are the Champs-Élysées side depicting Immortality prevailing over Time and the one on the Seine side of Harmony triumphing over Discord. [I can’t find big enough images and I get them mixed up, but one is a woman in gown and another has a penis and they are both standing over fallen figures. So, I’m pretty sure the Immortality is the man and the Harmony is the woman]. 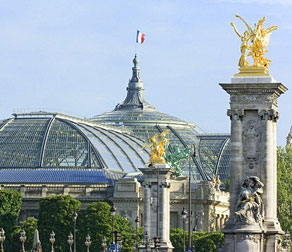 After the Exposition, the palace was the site of different kinds of shows in addition to the intended art exhibitions from a riding competition (1901 to 1957) but were mainly dedicated to innovation and modernity: the automobile, aviation, household appliances…think “home show” until 1947. The first major Matisse retrospective after his death was held at the Grand Palais in 1970 and was an incredible success.

Problems, or should we say in the field, issues and challenges to address.

The structure itself was problematic from the start, mainly as a result of subsidence caused by a drop in the water table. The builders attempted to compensate for this subsidence by sinking supporting posts down to firmer soil so as not to delay construction, but measures were only partially successful. A show about locomotives and horseshow runoff also took their toll on the space. Differential rates of expansion and contraction between cast iron and steel allowed water to enter and corrode until a glass ceiling panel fell in 1993, and it was not fully reopened until 2007.

I think it’s interesting that the Grand Palais has a major police station in the basement which helps protect the exhibits on show in the Galeries National and the “salons” (picture spaces) of la Société Nationale des Beaux Arts, Salon d’Automne, and Salon Comparaisons. I mean, hey, the Nelson has guards and the Duane Hanson Guard which I found equally frightening in my younger days, but not a real cops headquarters for art.

For the fashionistas, Chanel hosts many of its fashion shows here.

For the sabreurs, it was host of the 2010 Fencing Championships.

And for the WWI & II aficionados…

The Palais served as a military hospital during World War I, employing local artists that had not deployed to the front to decorate hospital rooms or to make moulds for prosthetic limbs.

The Nazis used the Palais as a truck depot and for two Nazi propaganda exhibitions. The Parisian resistance used as headquarters during the Liberation of Paris. On August 23, 1944, a peace officer fired on the advancing Germans from a window and the Germans responded with a tank attack on the Palais which ignited hay set up for a circus show and two days of black smoke severely damaged the building [those Frenchman…always keep the circus going while you’re resisting the Germans…:)].