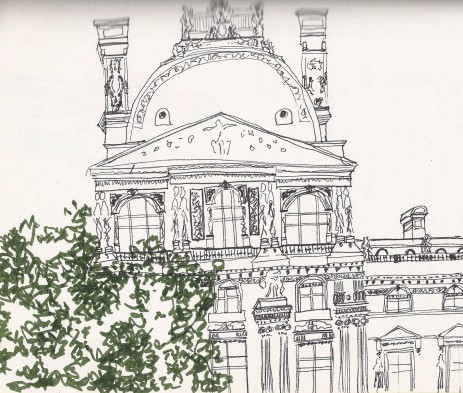 This is the Museum of Decorative Arts.  This is where I studied the history of bone china, boulle cabinets, tapestries, French armchairs, silver, and every functional yet decorative piece imaginable with which we trap ourselves today :).

things and stuff and who used what and why

and how all the low influenced the high.  And vice versa.

It is the north wing of the Louvre and is entered from Rue de Rivoli. The Rue de Rivoli is a famous shopping street running through Paris that was cut into the city by Napoleon and was named after his early victory against the Austrian army, the battle of Rivoli, fought in 1797.

It cut into the area on the north side of the Louvre and the Tuileries Gardens, but a bit of history on these two places that everyone visits on vacation.

The Louvre’s beginnings were as a fortress to Philip II in the 12th century.  It became a palace during the Middle Ages serving numerous Kings, but it was François Premier who decided the Louvre would house his art collection.  All the while, the Louvre continued to grow in size as a palace. It is only after Louis XIV chose Versailles as his residence in 1682, that constructions on the palace slowed. But this move to the country then allowed the Louvre to be used to house artists. Later the academy of painting and sculpture resided in the Louvre where salons were held to exhibit works and they would remain there for a hundred years.

In 174,7 there was a call for display of the Royal Collection and proposals for a public gallery. And under Louis XVI, le Roi du Soleil, the Royal Museum Concept officially became policy.

Thus, private art for the public domain began in France.

The Tuileries Gardens were part of the Tuileries Palace that was named for the former tileworks that resided on this land in Paris just west of the Louvre. As will sometimes happen, after the death of Henry II of France in 1559, his widow Catherine de’Medici planned a new palace. Her architect was Philibert de l’Orme but André le Nôtre did not begin the formal gardens and parterres until the reign on Louis XIV in 1664. As he and later Louis’s soon departed, this left the lovely palace abandoned, to be used only as a theater, and the gardens because a fashionable spot for Parisians.

So full circle, when Napoleon cut this swath through the city with the rue de Rivoli, it was a transitional compromise between an urbanism of prestige monuments and aristocratic squares and the forms of modern town planning by official regulation. This included the arcaded shopping streets of the rue de Rivoli, retail ground floor always and ideally covered.

And, before Haussmann and all the later work by Parisian urban planners to make Paris the city of avenues, public monuments, squares, cafés, churches, shops, and vistas in every direction, this place began as a lookout spot.

It began with a fortress and a field. And it brought together, if not the King and his subjects, his art and his beauty to share and mix with the beauty and culture of the real people.

And, I think this was a pretty good idea. The building, evolving and partial planning of a city that bring a true feeling of ownership to all who are lucky enough to have this experience which can be anywhere.

We all have it when we see it, taste it, smell it, touch it; the senses of place.

Category: Architecture, France, French Sketchbook, PoetryTags: Back at the Ranch with Paula, Museum of Decorative Arts in Paris, rue de Rivoli, The Louvre, The Tuileries |