Taking my Pony on my Boat: what I share with Zeb Pike. 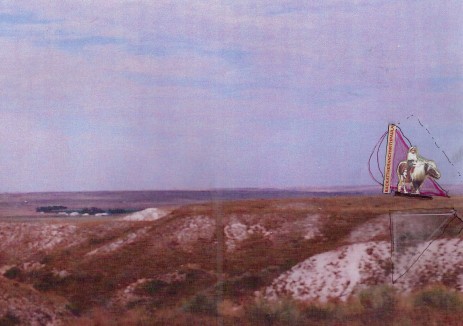 Me and my Pony on my boat on the High Plains.

I do have a few things in common with Zebulon Pike.

I climb the mountains to my West.

I speak French which I use in the West.

As was his, my father was in the military, or at least in the Marines Corps.

And, I beat the trails through Northern New Mexico quite often. This is where Pike was encamped when he was captured by Spanish authorities and taken to Santa Fe.

I, too, am captured in New Mexico by Santa Fe.

By the art and culture and landscape I need to nourish me on the Plains, so as to be refreshed again with its beauty when I return.

And I am also an explorer of the High Plains that records with maps, drawings, pictures, people’s stories, history and research.

So I understand now that this shadow at right in yesterday’s picture, made  from the clear photo corner that was holding another picture, that is me exploring the High Plains by sea.

When I did sail at camp, about all I could do well was to trim the jib. And that’s maybe all I will ever really take part in in regard to making money off land in the High Plains; to be the crewsman, cook the meals, drive. To suit up and be there.

When I sail on this boat, it is isolated with a skilled crew, but I am somewhat of a stowaway who serves up the chow.  I do share in my own way what I can, sometimes having them yacht, but often with others not on board. Not just sharing of the ranch but of other ranches, through drawings and photographs and writing about ranching in Kansas.  Or in other ways like preserving a Depot that used to ship cattle or having folk artists to a one-room school near my house and inviting everyone around to come see, hear the music, and bring their fiddles.

I do the work on the boat that I know how to do, that I did halfway well with what I’d been given, where I think I’m giving back.

Sometimes when I would return to the main dock, I would do something stupid like let go of the main halyard. This only needs to be learned once. And sometimes I need to find a different dock.

But mostly what I enjoy on the High Plains, is sailing and seeing at sea.

Sometimes it is when I am running…

A bit of it was in the pastures where I would fish for lost cattle. I didn’t always know where to look and it seemed like I never found them. But I could feel something, maybe someone saying follow me…and I will make you fishers of men…

For a lot of my time I had on the High Plains, I had the blessing and curse of taking my pony on my boat. I was probably not as useful as I could have been on the XIT Yacht, but there many people on that boat, and it just seemed so crowded it might sink. So, I lightened the load, my load…

In my books, my degrees, my work in design or preservation, in my car driving miles, in my art, I could get lost on the ocean. But, I would always be guided safely home, wherever that was for the night…Lawrence, Kansas City, Wichita, the XIT Headquarters, Santa Fe, or a hotel in a small town in Kansas when doing historical research in the field.

a Lone Ranger note: I like this song, but I take issue with the one line that pits Tonto and the Lone Ranger as enemies. I feel it is a contemporary translation that lacks depth in understanding the actual details of the history of its writers. Their intent was to illustrate the common values of an Indian and a White man, to do good, and a friendship that united the pair. They worked alongside each other as practically equal partners, and had each saved the other from death at different points in their lives.

Tonto’s character was originally a Potawatomi Indian by choice of the radio station owner who was from Michigan. This was a non-native to the area where he rode in Texas and the clothing is inaccurate. But, ‘Tonto’ in Potawatomi means “Wild One” and was mistaken as the Spanish word meaning fool or dumb. And, Tonto called the Lone Ranger “Kemo Sabe”, “trusted servant.” They worked the High Plains together, and would have been on the same boat.

So yesterday, when I started with Zeb, I went on my sailboat journey of maps and google and Walter Webb’s Great Plains and my Master’s Thesis to try to take what I’d read and done before and make it into something short, edited and tangible. But, instead I realize I took my pony on my boat and we just enjoyed the day.

I still do this almost every day and accept that this was the way I was made.

And just sometimes it works. I zigzag back and forth at sea and occasionally hit my mark, reach the point.

At other times I don’t really know where I went or where I was headed, but I did have kind of a plan, just like we did with America when Zeb was sent out to explore.

And I always enjoy the journey, and record it in my memory or in some other way to preserve. I take that with me, and I leave some behind for the next guy, to do with as he pleases.

This is Paula, Explorer of the High Plains.